The Power of Words

The Power of Words. Patrie Rothfuss once said – “Words are pale shadows of forgotten names. As the names have power, words have power. Words can light fires in the mind of men. Words can bring tears from the hardest hearts. ” Life of Pi directed by Ang Lee, highly inspired and affectionate movie. Life of Pi is a three part story of Piscine Patel, a sixteen- year- old South Indian boy who survives out at sea with a Bengal tiger for 227 days and then tells this story of a young writer who came to Pisine for inspiration.

Don't use plagiarized sources. Get your custom essay on
“ The Power of Words ”
Get custom paper
NEW! smart matching with writer

The movie conveys many interesting themes, but one that is very influential is the power of words. The theme power of words as well is the main focus of the story “Two words” written by Isabel Allende in 1989. “Two Words” follows the story of a female character that grows up as an orphan with no one to support her. She eventually learns the impact that words and reading can have, particularly among a society that is largely illiterate.

She ends up making money by writing letters for other people.

Words have high and influential power that can affect people’s identity, fate, and meaning or purpose of their lives. Two media pieces the movie Life of Pi and story “Two words” conveys a lot about the power of words and how they are influencing people. Identity is the distinct personality of an individual regarded as a persisting entity; it is a set of personal morals, beliefs, and characteristics which depict overall person identity.

At the beginning of the movie, Pi initially named as Pisine Molitor Patel, but everyone at school makes fun of him and called him “pissing”. This causes Pi to take a stand and change his identity, change his name to Pi. During the course of Pi’s life the influence of words contours his individuality as well. His father states “how can he find a way, if he cannot find a path” (Life of Pi 2012). This conveys strict expectations that father have of his son. So Pi will try to change his identity and personal morals to meet the expectations that his father have of him.

The power of words in shaping identity is a huge theme in the short story “Two Words” as well. Due to a fact that the main character Belisa Crepusculario has been born into a poor family “so poor that they did not even have names to call their children” (Allende 2). Without a name, a person’s identity can remain unknown. Then, as her character develops she decides to give herself a name Belisa Crepusculario and when this event happened, she started shaping her identity from the state of poor and tentative to a strong and confident individual.

Words act as helping hand in transforming Belisa’s character from weak little girl to a strong liberal woman, consistently shaping her identity. Identity is a huge theme that has been conveyed in the movie Life of Pi and the story Two Words. Joseph Campbell once stated “Life has no meaning. Each of us has meaning and we bring it to life”. Meaning of life has been discussed in the movie Life of Pi and short story “Two Words”. During the course main character’s life, the meaning of Pi’s life is changing throughout.

At one point it is to live a happy and quiet life in India and at the other point, it is to get through all of the obstacles that happened so rapidly in his life. The influence of words contours Pi’s life. At some point Pi stated “It is true that those we meet can change us, by the actions they take or the words they say sometimes so profoundly that we are not the same afterwards, even into our names” (Life of Pi 2012). The fact that Pi said that shows how the influence of other individuals and the actions they perform are the words they say changed his life and as the result changed the meaning of his life.

In the short story “Two Words” similar situation is happening, person’s meaning of life is changing throughout the story. One of the main characters Colonel wanted to become a president and he needed Belisa’s help in writing the speech for him. Belisa did very well in her job and wrote a speech for him and as well gave him two secret words that only Colonel and she knew. At some point in the story the meaning of Colonel life was to become a president, but then it slowly start changing.

He was repeating his secret words, as he did more and more obsessed. He told them when he was mellow with nostalgia; he murmured them in his sleep; he carried them with him on horseback; he thought them before delivering his famous speech; and he caught himself savoring them in his leisure time. And every time he thought of those two words, he thought of Belisa Crepusculario, and his senses were inflamed with the memory of her feral scent, her fiery heat, the whisper of her hair, and her sweet mint breath in his ear, until he began to go around like a sleepwalker, and his men realized that he might die before he ever sat in the presidential chair (Allende 4).

These two words changed Colonel meaning of life from the point in which he wanted to become a president to the point where he become obsessed with two words the Belisa told to him, and he just wanted to see her. Meaning of life is a huge theme that is being conveyed through both movie Life of Pi and short story “Two words”, this two media piece brings a new perspective to the meaning of life. “ Fate and self-help share equally in shaping our destiny” – Winston Churchill.

Words play a crucial role in changing the person’s fate or destiny in the story “Two Words” and the movie Life of Pi. “Other than becoming a prostitute or a servant in a rich man’s kitchen, there were few jobs that she can do”(Allende 2). The main character in “Two Words” Belisa Crepusculario had very few opportunities in life, and all of them were not attractive, but she stands and take action to change her destiny. She becomes very liberal, strong and confident person, “she had no need to call out her wares, because with so much walking here and there everybody knew her” (Allende 1).

Therefore Belisa changed her fate and what she was meant to be, all of this is because of her occupation which consisted of selling words, and as she believed words have high and influential power on everything in life. This shows how power of words can change persons fate and what an individual is meant to be. The power of words in changing the destiny conveyed a lot in the movie Life of Pi. Similar to Belisa’s character, Pi experimenting trauma in his life, almost bringing him to solitude. At the point in life where Pi’s life was at one of its worst points, he states “Words are all I left to hold on to” (Life of Pi 2012).

During the darkest times Pi has been writing a diary, which bring him hope and motive back to life. In addition Pi’s father’s words “how he can find a way if he cannot find a path” (Life of Pi 2012), reside in his mind as a constant reminder of the expectations that his father have of him. Therefore these words change Pi’s life and fate. Pi at one point stated “you must take life the way it comes at you and make the best of it” (Life of Pi 2012). This shows the Pi’s view and thoughts about the life and destiny, and how his own ideas and his father’s words affected his life.

Fate is very complicated and unpredictable, but an individual can stand and take an action to change his destiny, change his life. Inspirational movie, Life of Pi directed by Ang Lee. Life of Pi is a story of Piscine Patel, a sixteen-year-old Indian boy who survives out at sea with a Bengal tiger for 227 days and afterwards tells his story of a writer who came to Pisine for muse. The movie conveys many exceptional themes, but one that have high impact is the power of words. The theme power of words is conveyed in the story “Two Words”.

“Two Words” written by Isabel Allende in 1989, the story of a female character that grown up as a poor person with no one to support her in life. She eventually learns the impact that words and reading can have on people, particularly among a society that is largely not educated and illeterate. She ends up making money by writing letters for other people. Words have high and influential power that can affect people’s identity, fate, and meaning or purpose of their lives. Two media pieces the movie Life of Pi and story “Two words” conveys a lot about the power of words and how they are influencing people throughout their lives. 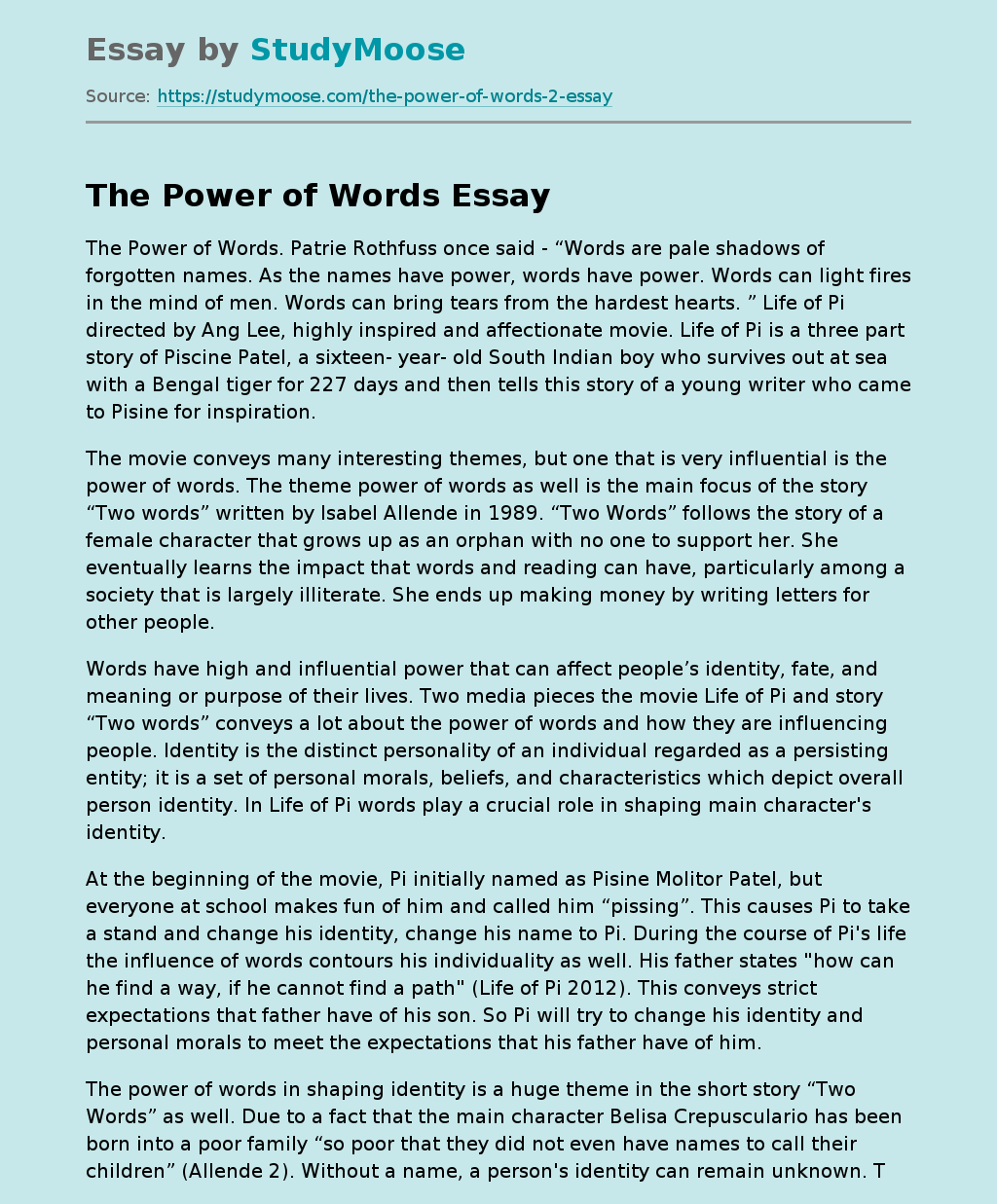