The Positive and Negative Effects of Russian Industrialization

In 1861, under the rule of Alexander II, Russia moved into an active period of social and political reform that established the base for industrialization. It wasn’t until the 1890’s that Russia finally entered the industrial age. This was due, in part, to the fact that earlier czars feared losing the support of the nobles so they avoided reform.

Don’t waste time
Get a verified expert to help you with The Positive and Negative Effects of Russian Industrialization
Hire verified expert
$35.80 for a 2-page paper

The nobility strongly opposed industrialization because it would provide oppurunities for workers to leave behind the tyrannical rule of the nobility, trading in their pitchforks for a ticket to the city. Between 1890 and 1900 workers who would have been otherwise been handpicking crops for next to nothing served to triple Russia’s production of coal, iron, steel and oil.

There were problems with Russian industrialization right from the start.

As industry in Russia expanded, serfs were being sent to work in the factories. At first, this seemed to be a good thing. Afterall, the serfs were being given the opportunity to work apart from the land of their masters. However, the serfs were able to keep very little of the money they obtained from working in the factories. Much, if not all of their pay was given to their master. Russian serfs, who made up the majority of factory workers, were forced to continue living in poverty. It wasn’t until later on that serfs were able to wriggle free from their masters iron fisted rule.

This serves as an example of just one of the negative effects of Russian Industrialization.

In 1904, Russia was defeated in a war against Japan. The loss stirred feelings of frustration created by years of unjust working conditions. Workers carried out demands for shoter hours and better wages. Liberals potested for reforms to create a fair government and a constitution. As conditions grew increasingly worse, the Russian Orthodox Church organized a march that was to take place on Sunday, January 22nd in the year 1905. The idea was that Nicholas the II, the son of Alexander III and current czar, would help his people if he only understood what they were being forced to go through. However, Nicholas II feared the marchers and fled the palace, instructing troops to line up across the square. As the marchers approached the palace, hundreds were shot down and killed. Another example of the negative effects of the Industrialization of Russia.

It wasn’t until Bloody Sunday, as it was later called, that the government took action. When revolts, strikes and terrorism spread across Russia, Nicholas was forced to put reforms in place. Rather than doing the work himself, he appointed Peter Stolypin prime minister. Stolypin realized that Russia was in need of both reform and repression. He put land reforms into place in order to gain peasant support. He also worked to improve education and increase the strength of elected assemblies called zemstvos. Although Peter Stolypin was assasinated in 1911, worker and peasant discontent had dramatically decreased by 1914.

The Positive and Negative Effects of Russian Industrialization. (2016, Jun 22). Retrieved from http://studymoose.com/the-positive-and-negative-effects-of-russian-industrialization-essay 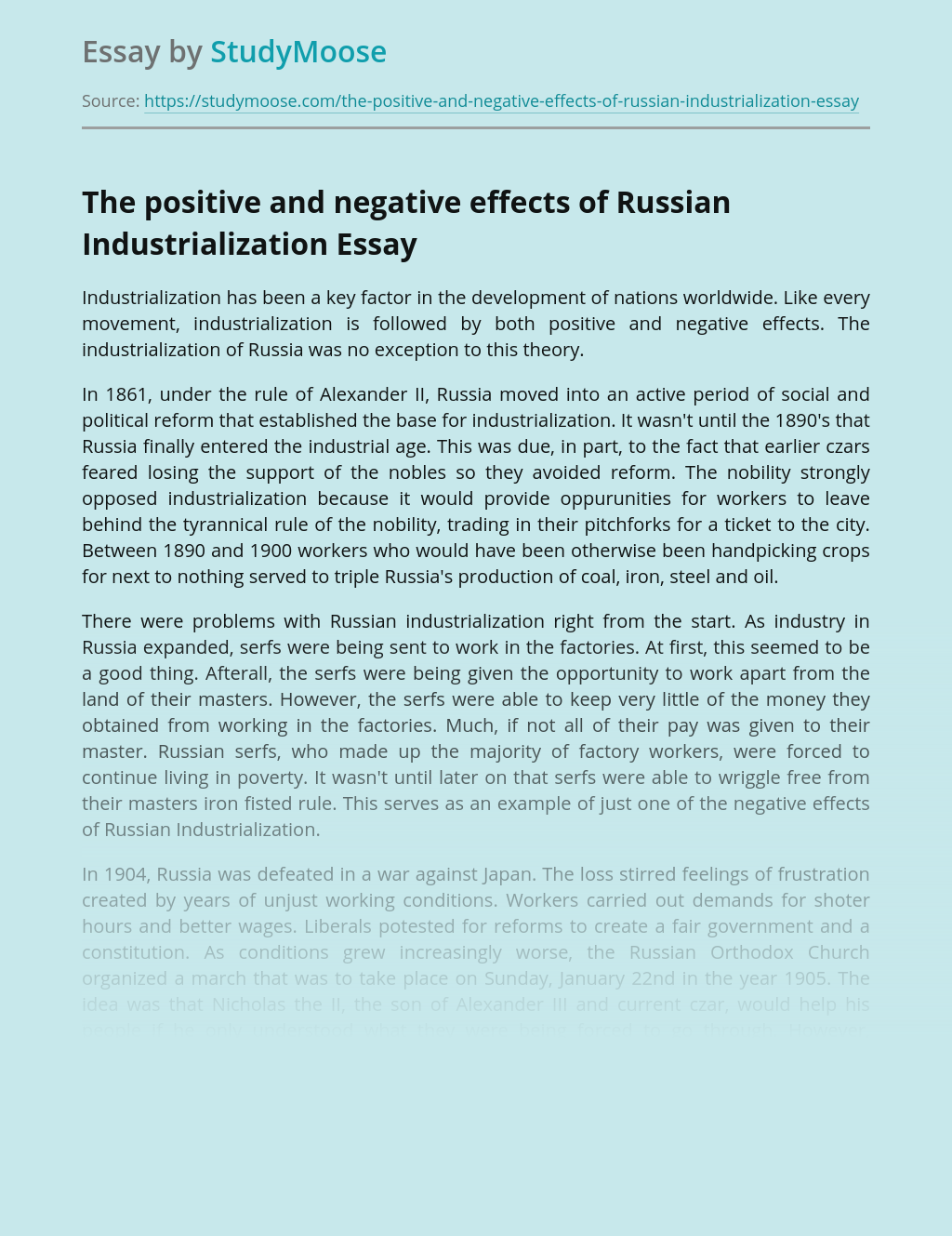 Don’t waste time
Get a verified expert to help you with The Positive and Negative Effects of Russian Industrialization
Hire verified expert
$35.80 for a 2-page paper
Stay Safe, Stay Original