Throughout ‘Nutting’ Wordsworth uses many different techniques to help with the development of its meaning and effects. Written in the first viewpoint, it is allegorical with its focus being on a young boy going out to collect nuts, dealing with the past of the outing framed by the adult’s memories with nature teaching and guiding him. One of the leading themes in Wordsworth’s poetry was of childhood and nature, as seen in other poems such as ‘There was a Boy’, ‘We are seven’ and ‘Lucy Gray’, showing his interest in the relationship between the two.

Don't use plagiarized sources.
Get Your Custom Essay on The poem ‘Nutting’ by William Wordsworth Just from $13,9/Page

(Blades, 2004, p.7Written in iambic pentameter we see that ‘at somewhere around ten syllables, the English poetic line is at its most relaxed and manageable’ (Fenton, 2002, p.56) giving room for the variations seen in the poem, such as the short opening line to be used with great effect to the overall feel and meaning.

The poem opens with a dramatic pause, which also creates a visual impact; ‘________________ It seems a day’, indicating that the poem is reflective and immortalised in his memory with it being a day ‘which cannot die’ (line 2). The use of poetic inversion with ‘When forth I sallied from our cottage-door’ (line 3) helps in the creating of a rhythm, setting up the most commonly used line of 10 syllables throughout the poem. The word ‘perhaps’ (line 28) emphasises that he is looking back on something that took place some time ago. ‘The violets of five seasons reappear and fade, unseen by any human eye’ (lines 29&30) could be symbolic of the passing of five years and enforces the feeling of excitement at a place previously ‘unvisited’ (line 15). The internal rhyme ‘by’ and ‘eye’ help in creating a tempo.

The youthfulness and inexperience of the boy is highlighted by his ‘nutting crook’ (line 5) and clothing ‘put on for the occasion, by advice’ (line 8) of the Dame showing his eagerness and enthusiasm. There is the use of a dactyl with ‘heavenly’ (line 2) emphasising the excitement of the excursion. The use of the half rhyme ‘occasion’ and ‘exhortation’ (lines 8&9) speeds up the line, again helping to create a sense of excitement. The ‘milk-white clusters’ (line 18) and the ‘virgin scene’ (line 19) point to the purity and innocence of the child, while the use of the simile of ‘stones that, fleec’d with moss’ were ‘scatter’d like a flock of sheep’ (lines 33-35) is a childlike image again emphasising the youth and innocence of the boy. The stones being ‘fleec’d’ is representative of the fleece of sheep, adding imagery to the metaphor.

There is a noticeable change in the mood and tone of the poem in lines 19-41 ‘combining joy and tranquillity with imagery of happy sensual pleasure and discovery’ where ‘the blank verse is characterised by regularity with loose sentence structure’ (Blades, 2004, p.35) with the use of enjambment helping to make the poem flow freely. The use of caesura in line 19, ‘A virgin scene – A little while I stood’ creates a pause, slowing the poem back down, allowing the reader to reflect on the image being created. The man remembers the admiration he felt when he came across the ‘dear nook’. (line 14) This is emphasised by the effect of ‘breathing with such suppression of the heart’ (line 20), a lyrical line which with no punctuation, makes you read faster. The use of the trochee at the beginning of the line with ‘breathing’ places a greater emphasis on the breath-taking feeling it creates. On reaching the nook, he ‘eyed the banquet’ (lines 22&23), a metaphor for the bounty of nature, creating an image of the fruitful tree.

The enjambment used ‘Where fairy water-breaks do murmur on for ever’ (lines 31&32) helps the words to flow just like the flowing of a river. The use of the word ‘fairy’ (line 31) is also reminiscent of a childlike imagination, again linking to the theme of innocence within the poem. The word ‘murmur’ is onomatopoeic while personifying the voice of nature and is repeated in line 36, ‘I heard the murmur and murmuring sound’ which helps to create a rhythm with the use of alliteration and repetition. Added to this the use of assonance in ‘foam’ (line 32) and ‘stones’ (line 33) and ‘trees’ (line 34) and ‘sheep’ (line 35) the rhythm appears stronger here. By using these various techniques, not only is a sense of rhythm developed, but also a sense of anticipation and excitement of what is to come.

The use of repetition of the word ‘And’ at the beginning of lines 41-43 speeds up the rhythm of the poem while the use of alliteration with the hard sounds of ‘both branch and bough’ and the onomatopoeic ‘crash’ (line 42) all help in creating a picture of the destruction. The use of enjambment, with lines running over into the next helps to speed up the tempo of the poem, reflecting the frenzied mood of the boy. Lines 41-46 frequently use the word ‘and’ which makes the reader link together many ideas, creating a picture of the devastation, which would perhaps normally be seen separately.

The final stanza is noticeably different in tone with a gentle mood as this realisation of the importance of nature becomes apparent. The word ‘Spirit’ (line 54) is a spondee, emphasising that the Spirit is in fact nature itself and that ‘nature functions as a moral force’ (Romantic Writings, p.68). ‘In gentleness of heart; with gentle hand Touch’ (lines 53&54) sounds almost prayer like and is in stark contrast to the previous language of ‘merciless ravage’ (line 43).

The use of caesura in line 54 creates a pause, emphasising the importance of the statement that ‘there is a Spirit in the woods’ (line 54). There is a feeling of spiritual awareness to the poem with mention of ‘Heavenly days’ (line 2), ‘Virgin scene’ (line 19) and ‘been bless’d’ (line 26) all brought together by the mention of this Spirit. Wordsworth believed that his poetry would be ‘alive with metaphors’ (Romantic Writings: An Anthology, p.88, line 276) linking in with the theme of nature being the live ‘Spirit’ seen in the final line of the poem.

Reading this poem at face value we see the story of a boy going out to collect nuts, but Wordsworth cleverly uses the various techniques mentioned to create deeper meanings and feelings within the poem. As a Romantic writer, he was influenced by ‘Rousseau’s suggestion that civilisation had corrupted humanity’s original nobility’ (Furniss, and Bath, 2007, p.187) and was concerned with the innocence of children and of connecting back to nature, something we see throughout ‘Nutting’.

By using blank verse the subject of the poem is elevated, showing its importance. (Approaching Poetry, p.14) The techniques used help the reader to gain more from the poem, seeing deeper into the meanings perhaps not seen at first, emphasising the importance of nature to all who read it. The imagery of nature being used is that of a place of sanctuary to return to which we are being invited to share in the experience.

The poem ‘Nutting’ by William Wordsworth. (2017, Aug 28). Retrieved from https://studymoose.com/the-poem-nutting-by-william-wordsworth-essay 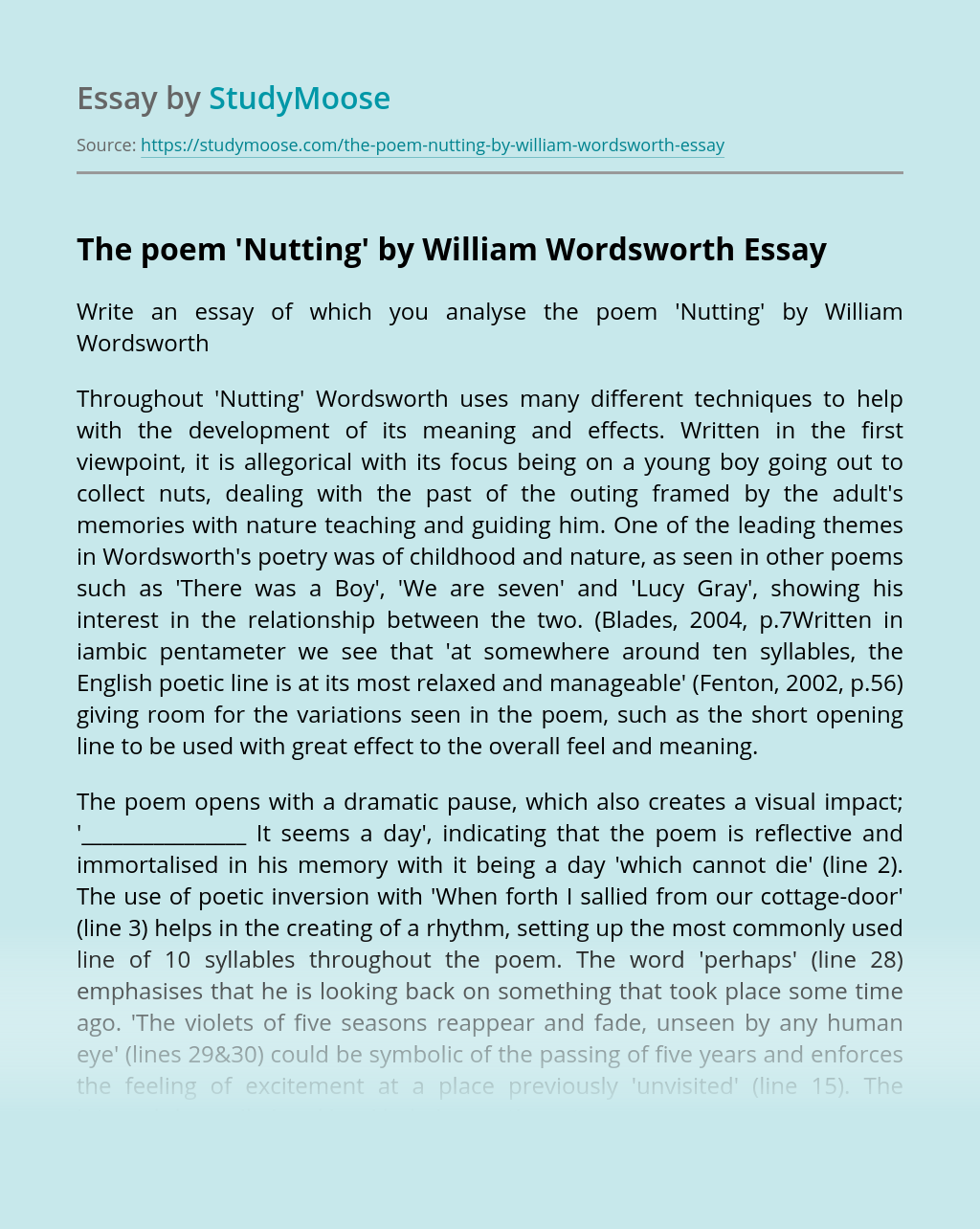 The exercises anticipated from a money office spread a wide range

The exercises anticipated from a money office spread a wide range from fundamental accounting to giving data to helping administrators in settling on key choices. What’s in store from your account division will depend to a great extent on variables, for example, how much contribution the proprietor/chief has in the association. At the base dimension,... VIEW ESSAY

An Analysis of My Time in Europe The 13 days I spent in Europe for this Maymester was enlightening, to say the least. Over the course of the just-under-two-week trip, I learned a great deal about the subtleties and differences not only between French and German culture but also as a whole how it compares... VIEW ESSAY

Introduction Budgeting is indeed a key component in managing short and long term planning. To define a broad objective such as wealth maximization is clearly not sufficient to achieve the goal. It is very important for an entity to get into more details over how to work towards the objective. Businesses typically do this by... VIEW ESSAY

View sample
The Incompatibility of Happiness and Truth

Brave New World is full of characters who do everything they can to avoid facing the truth about their own situations. The almost universal use of the drug soma is probably the most pervasive example of such willful self-delusion. Soma clouds the realities of the present and replaces them with happy hallucinations, and is thus... VIEW ESSAY