"The Piece of String" by Guy De Maupassant

A poor man from Breaute, Maitre Hauchecome was a thrifty Norman who believed that everything with a purpose should be picked up and saved. His outlook on life ended up costing him his reputation. An adjective that could be used to describe him would be frugal. Maitre Hauchecome was not wasteful or lavish.

Don't use plagiarized sources. Get your custom essay on
“ “The Piece of String” by Guy De Maupassant ”
Get custom paper
NEW! smart matching with writer

He spent his money sparingly, and was very economical. He proved this when he bent down to pick up the piece of string to save even though it was painful for him because he suffered of rheumatism.

As well as being frugal, Maitre Hauchecome was also innocent. Maitre Hauchecome had noticed the small piece of string on the ground and picked it up believing that someday it may be of some use to him. The story of him supposedly stealing the purse was false because we know that he had bent down to only pick up the string.

He stated his innocence when he was speaking to others willing to listen to his story by saying, “What grieved me so much was not the thing itself, as the lying. There is nothing so shameful as to be placed under a cloud on account of a lie.” There, he was convince people of his innocence and hoping that they would finally believe him.

A third adjective that could be used to describe Maitre Hauchecome is offended.

After being accused of stealing the purse, he became angry and hurt. He resented his accusers and former friends as his feelings became more and more wounded. He became distressed and confused on what he should do. An example of him as he was offended was when he said, “How anyone tell””how anyone can tell””such lies to take away an honest man’s reputation!

How can anyone””” Unfortunately, Maitre Hauchecome never redeemed his once good reputation. He wore himself out with useless efforts to try to win back his innocence. He began to waste away and took to bed in December. Early in January, on his dying day, he still claimed his innocence. Frugal, innocent, and offended were just a few of the many different adjectives that could be used to describe the poor peasant that died because of something so simple as a piece of string.

"The Piece of String" by Guy De Maupassant. (2016, Jul 16). Retrieved from https://studymoose.com/the-piece-of-string-essay 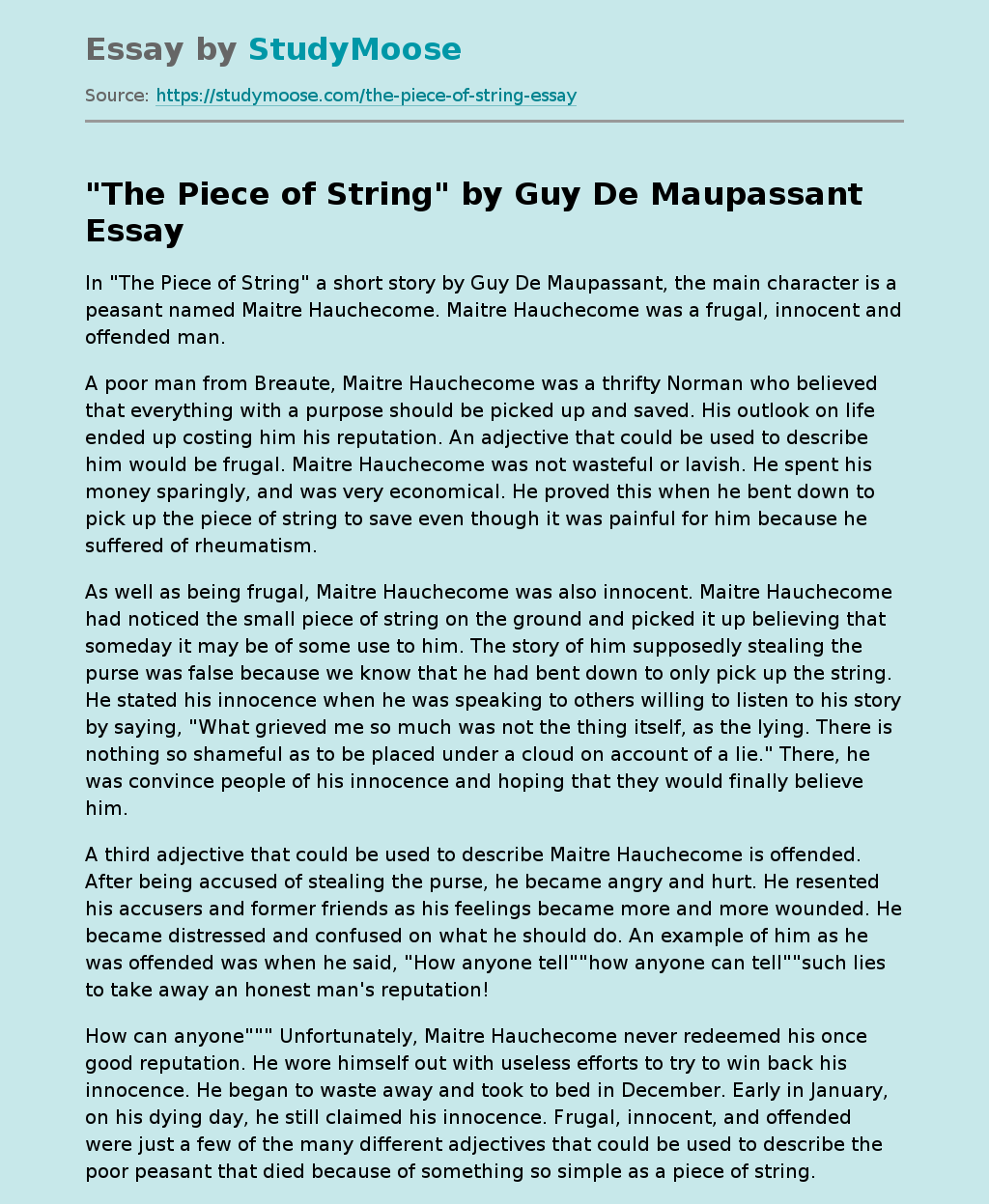