The Origin of the Solar System

Turn in your highest-quality paper
Get a qualified writer to help you with
“ The Origin of the Solar System ”
Get high-quality paper
NEW! AI matching with writers

2. According to the solar nebula theory, why is the suns equator nearly in the plane of the Earths orbit?

According to the solar nebula theory, a nebula of hot gaseous matter contracted and spun faster and faster and flattened into an equatorial ring.

3. Why does the solar nebula theory predict that planetary systems are common?

Solar nebula theory starts with interstellar cloud that contains hydrogen, helium, and traces of other elements.

The interstellar cloud is said to be rotating. The rotating of the nebula causes fragmentation. As the solar nebula contracts, it spins faster, conserving angular momentum in the process. The solar nebula continues to grow because of the addition of particles gathered from its surroundings. Turbulences break the disk of the spinning nebula, resulting in the formulation of eddies which are many small particles. The particles combine due to an adhesive force. The nebula continues to spin and creates bigger objects that will soon become planets (Evans).

4. Why is almost every solid surface in our solar system scarred by craters?

5. If you visited some other planetary system in the act of building planets, would you expect to see the condensation sequence at work, or was it unique to our solar system?

The condensation process is expected to arise in other stars which are starting or in the early age of the protoplanet theory. Evidences are gathered with regard to the formation of circumstellar disks to some stars in our galaxy such as Vega, Formalhaut, Lyrae, and many more. Another exciting discovery is that Vega has a circumstellar disk with a radius twice the distance of Pluto from the sun (Evans).

The Origin of the Solar System. (2016, Nov 07). Retrieved from http://studymoose.com/the-origin-of-the-solar-system-essay 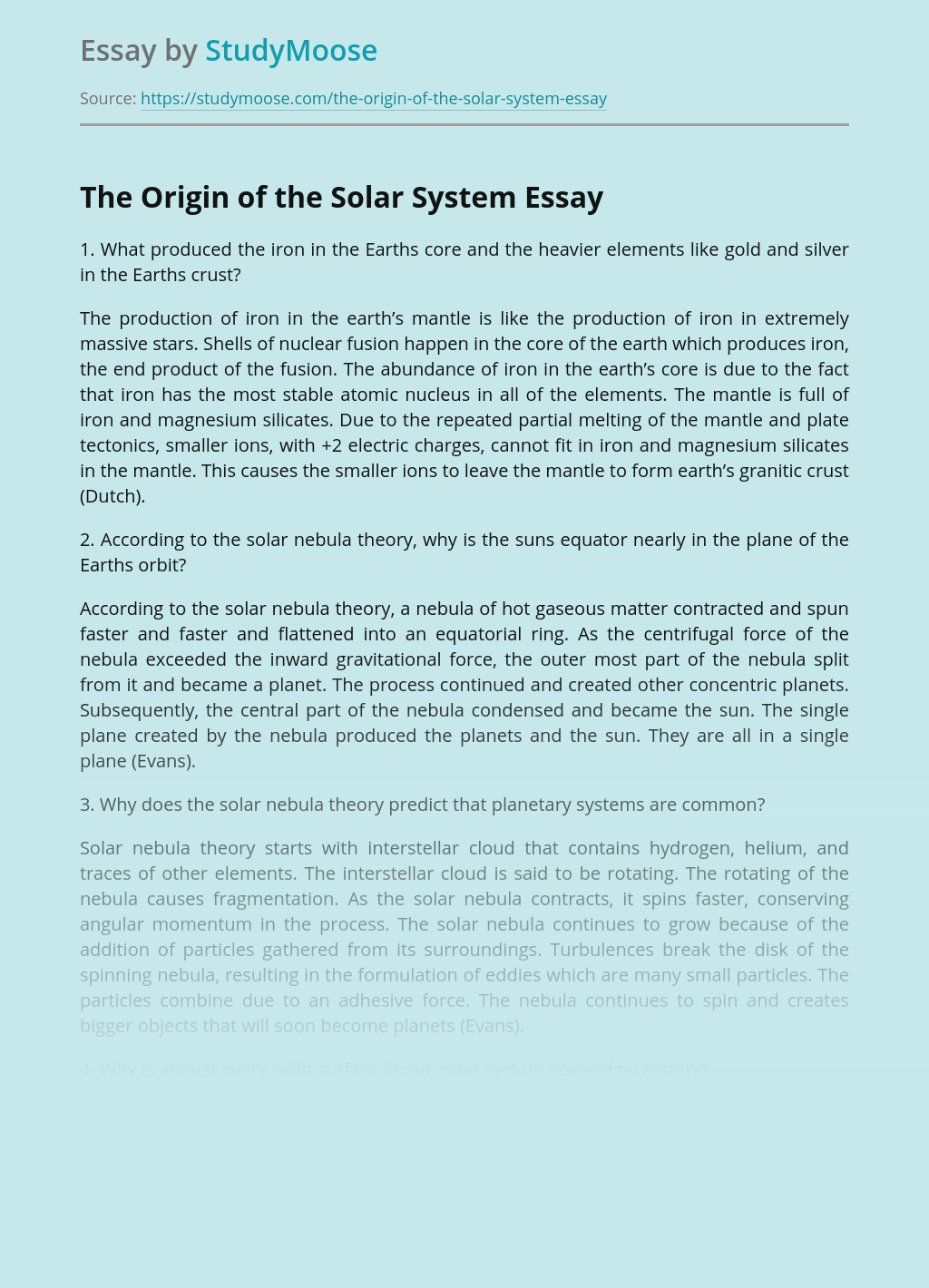 Turn in your highest-quality paper
Get a qualified writer to help you with
“ The Origin of the Solar System ”
Get high-quality paper
Helping students since 2015
Stay Safe, Stay Original