The Numerical Solution of Hyperbolic Equations in Nuclear

Don't use plagiarized sources. Get your custom essay on
“ The Numerical Solution of Hyperbolic Equations in Nuclear ”
Get custom paper
NEW! smart matching with writer

Newton’s second law is F = ma. It says Force (F) on an objects equal to mass(m) multiplied by acceleration ( a) diffusing viscous term – describes the physical transfer quantity through a small area with normal velocity per some time.

Viscosity describes fluids resistance to deformation caused by stress (can be shear stress or tensile stress). Equivalent term for metals would be thickness shear stress is given by a formula F/A, where F is force and A is cross sectional area of material with area parallel to the applied force vector. It is applied to flui ds which move along solid boundary. Tensile stress  in fluid tensile stress describes the internal force applied on a given particle, caused by neighboring particle.

Navier-Stokes equations are designed in order to simulate the flow of various fluids in numerous discip lines across physics (electromagnetism, acoustics, elasticity). Navier- Stokes equations were formed by combining Newton’s second law and fluid motion. Also assumption of stress being the sum of diffusing viscous term and pressure term was taken to describe viscous flow. Without Navier-Stokes equations working with weather model, ocean currents, water flow in a pipe, air flow around a wing would be extremely hard. Also these equations are widely used in designing airplanes and cars, studying blood flow, designing power stations, analyzing pollution and so on.

History of the Navier- Stokes equations dates back to 1822. Claude-Louis Navier mentioned in his memoir the equations for homogeneous incompressible fluids with regards to molecular arguments. Later, in 1829 Poisson derived equations for compressible fluids. Consequentially, George Gabriel Stokes formulated the Navier-Stokes equations in his paper (1847) as we know it today.Up to this day there is no proof for existence and uniqueness of Navier-Stokes equations’ solution in three dimensional space. Moreover, it is considered one of the seven most important unsolved problems currently.

Let’s understand difference between linear waves and non -linear. In linear waves the velocity at any point is the same. That is, the total velocity of the flow is not effected from internal particle velocities (which we will see are the case in non-linear). So if we look at Figure 2.1, we’ll see that the wave repeats itself and it propagates without any change at any moment in time. If we would pick any point and examine it during time, the overall velocity in that point will always be the same. For example, imagine that you are in the middle of the ocean. Waves are born and start their propagation. From that point waves are linear as they acquire some height and just propagate without changing their shape.

What about nonlinear waves, we will rarely observe too similar curvatures at two different moments. Particles in one position have higher velocity than in others, thus during the time we reach a point when some particle x, reaches particle y, which was in front before, then passes it. We will have then a picture of crushing wave. For instance, imagine you are on the beach. You see the waves coming, then crushing on the sand. Such waves are not linear, as they change their shape over time. In Figure 2.2 you can see nonlinear wave. As in computers for crushing wave one x would require three y values, it is not display, instead such image is resulted the last one also can be represented as

physical meaning of this equation is the propagation of non-linear wave, however in some parts the amount of error can cause grainy (non- smooth) surface in the graph.

For 1D case no special calculating method must be introduced as it is solved analytically by using, solution that is presented in 2.2. ? (x) = f ( x? c 0?t )

However, when we get to solve the PDE for the non-linear wave propagation, there is a methodology to be presented. As we already presented in figure & description 2.3 when having a hyperbolic PDE of type After getting this equation lets divide our coordinate system into an n by m grid where where the difference between each to xi neighbors is ?x and ti neighbors ?t. Now having this grid we can rewrite the equation we got in the following form

From here, given the initial condition (row ?(0,x)), we want to find the values of each row to reconstruct the wave at each point of time.

That is we need to find ?(ti+1,x). Lets get it from the equation above.

Here is the numerical solution for the The PDE that we intended to solve. As one can notice this scheme can have a problem at the boundaries. Numerous methods have been developed to approximate and solve that problems. The famous schemes are Lax-Wander of, leap -frog ect. ect.

The numerical solution in the this case involves just using the analytical solution and simulating time in o rder to get the wave propagation . One just needs to assign ? ( x ) = f ( x? c0?t ) and correctly simulate the propagation of wave with the constant speed c0. For this simulation one can use the horizontal translation of the function by c0t.

The periodic for of the wave is the obvious assertion for the abovementioned words. Also no uncouthness or error cumulating is theoretically possibl e in this case, due to the fact that the solution for the equation is derived analytically 3.3 Numerical Solution of Navier-Stokes for non- linear waves

In this section we will speak about main aim of this paper, the solution of two dimensional that is non-linear waves. As was mentioned in the previous chapter we will derive solution by PDEs. First let’s understand what we have and what we want to get. We have the function at the initial moment (t=0), and we want to be able to trace how it would behave during some given period. Also we have functio n ? which describes the velocity change for the individual particle at the given time moment . shows relation we had derived For our purpose we will have to approximate the initial function at each next stage by result of the previous step . To make it more clear let’s examine figure 3.3.1. In the given example we have propagation of function sin(x2) at two moments. Also we are looking at the range [0,4?]. As we see the waves are similar however they slightly differ at the endpoints. The reason for alternative propagation is mainly because of ?. In the figure it is defined by x+ t, which forces the wave to change its shape. The change in the wave is seen much better in figure  which demonstrates the wave in 16 different time moments. Two different view ar e presented to show the difference in 5 4. The Results and Conclusion

From Figures illustrated in Section 4.2 can be concluded that even though some times the numeric solution for partial derivative equations can give a correct result, it is not always describing a physical phenomena. As Waves simply cannot behave in nature as for example in figure 4.2.5. Few Things can be noticed. First there are cases when error occurs, but later it is self fixed and the continuation is normal.( For instance Figure 4.2.11 There are ways which can make this solution more realistic. That is making small ?t and/or ?x. However it will result in slower calculation. There are known ways for stable Calculations. One of such methods is presented by Suren Khachatryan in the paper. Modification of the Method of Integration along Characteristics as Adaptive Mesh Approach in Solution of Hyperbolic and Parabolic

The Numerical Solution of Hyperbolic Equations in Nuclear. (2019, Nov 26). Retrieved from http://studymoose.com/the-numerical-solution-of-hyperbolic-equations-in-nuclear-essay 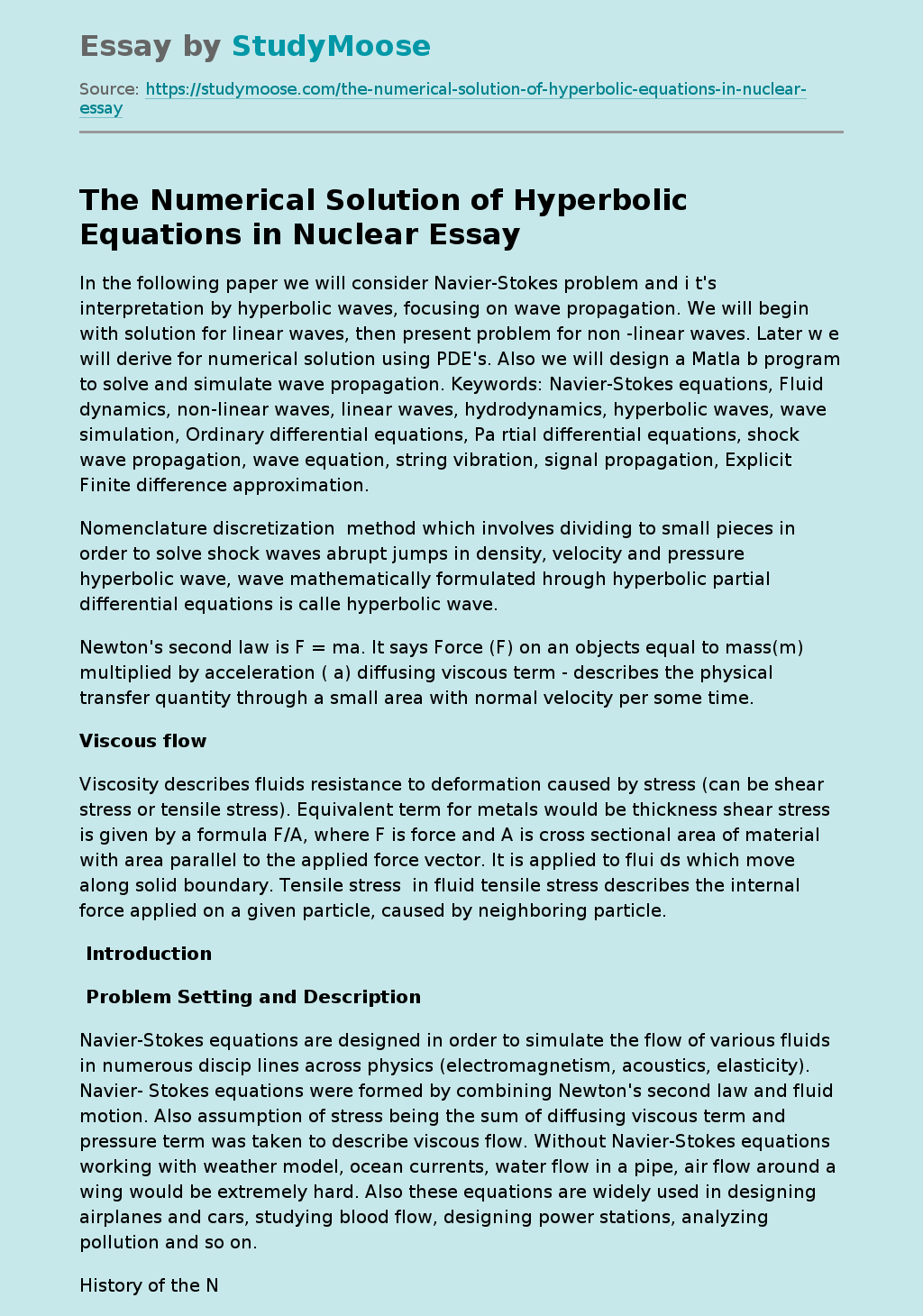