The Nonmarket Environment of McDonald’s

Obesity. The house passed an act called Personal Responsibility in Food Consumptions act, and dubbed the cheeseburger bill. It protects food and restaurants from obesity lawsuits. Interest in obesity issue increased after reports done by Centers for Disease Control Prevention estimated deaths from obesity are around 400,000. Trial lawyers became excited to use this niche. The restaurant and food industries argued that obesity is a personal response and lobbied congress for protection from lawsuits.

Meal and Menu Nutrition Information: Meal Education and labeling Act in the House and the Senate were introduced.

Turn in your highest-quality paper
Get a qualified writer to help you with
“ The Nonmarket Environment of McDonald’s ”
Get high-quality paper
NEW! AI matching with writer

The act required to name of the food on the menu, the calories, grams of saturated fat plus trans fat, and milligrams of sodium contained in a serving of the food. This act was passed after a man named Morgan Spurlock chased after McDonald’s with his documentary targeting them.

Advertisement: Advertising to children were big concerns now, as McDonalds promoted their logo on toys, provided meals at some schools, and when movies came out they had the same characters toy in the happy meal.

Acrylamide: A substance, which causes cancer called acrylamide, was found in carbohydrates that were cooked in high temperature. The emphasis came especially to McDonalds French fries. But other researchers found out that it would require lots of amount of fries to eating at once would meet the cancers requirement. However, the Safe Drinking Water and Toxic enforcing act required a public notice about the substance.

Animal Welfare: People for the Ethical Treatment of Animals and other animal welfare groups over the treatment of food animals targeted McDonalds. They set requirements for its beef suppliers, including minimum space standards for cattle in feedlots. Suppliers: McDonalds developed Code of Conduct for Suppliers. The code covered practices pertaining to the use of prison and forced labor, child labor, working hours, compensation, nondiscrimination, and the workplace environment.

Center for Disease Control and Prevention found out the number of deaths caused by obesity in February 2004. The Surgeon General estimated that health care costs resulting from obesity. Economists in return argue that obesity is caused by many different factors, not just fast food. Trial lawyers sought new mass tort after hearing the estimated health care cost from Surgeon General. Researchers from Sweden find acrylic in carbohydrate foods, which are cooked at high temperature, especially fries. FDA approves the Swedish researchers; on the other hand Steven Milloy proves that it is unlikely to get cancer from a small amount of fries.

PETA targets McDonalds for their treatment of animal. Further USDA hires Dr. Temple for further inspection to find negative answers. McDonalds complied with the doctors results and set standard for the middlemen.

2. What is the time frame of each issue?

3. Which issues should have the highest priority?

All of the issues are issues that need to be taken as the highest priority. Even if McDonalds truly fixes one problem, other problems could take them down. In addition, the concerns are really intriguing. The issues are either killing a person slowly, or killing an animal roughly.

If I had to chose one of them, I would select the antibiotics. The main issue McDonalds face is obesity. Providing antibiotics in our food can probably make us grow and fatten too. By using these growth-promoting antibiotics, they are making the animals suffer, and also killing us slowly.

4. What overall strategy should McDonald’s adopt for dealing with these nonmarket issues?

An overall strategy I would recommend to deal with all nonmarket environment would be just promoting and using only fresh and natural products, with no chemicals.

1. Should Facebook enter the Chinese market on its own and develop its own relation with Chinese government?

2. Should Facebook join with Baidu in a joint venture that would be managed by Baidu? Might the government make demands on Facebook regarding its Web sites outside China?

If Facebook makes a joint venture with Baidu, I think there would be a problem of conflict of interest. However, with the current situation in mind, I think it would be more rational if Facebook does a joint venture with them. Baidu how things work over there, so it would make sense if the joint venture makes an agreement that Baidu would manage the company. They could make an agreement that Baidu will be in control for the first two or three years, until things settle down and Facebook can get to know much more about the Chinese government.

3. Other countries also censor Internet services, although not as broadly or continuously as China. Should Facebook develop a global policy governing how it deals with censorship before it enters the Chinese market?

I think that is a great idea. As mentioned in my previous answer, I believe the Chinese government might make demands outside of China, but making demands inside China is for sure, especially when it comes to censorship. By developing a global policy, which deals with censorship, Facebook will be the one in control of their environment, and prevent future problems.

4. If it enters China, should it allow users to be anonymous? Should it join Global Network Initiative?

China is a big country with 1.35 billion people, and anything could happen if they are allowed for free speech. With the examples of Egypt and Urumqi, I think Facebook should join Global Network Initiative and allow users to be anonymous. Lets say Facebook enters China, and there is an uprising, and people joined and spread the news by Facebook, if something like that happens Facebook will be in trouble as they are responsible. Also the people who started the riot will be in bigger trouble, a death sentence most likely. So by joining the Global Network Initiative, if something like that happens, people will be secure when they’re anonymous, and Facebook wouldn’t carry the whole weight by them, it will be on the Global Network Initiative.

5. What strategy should Facebook use to deal with the pressure it will face in the United States?

A website which connects people, exposes people like Facebook entering China is definitely a matter of geopolitics. It is something you do with care and planning for the long term. Kenneth Roth expresses the importance of requiring the real identity of users when they register. One strategy Facebook can use is to provide this information.

The Nonmarket Environment of McDonald’s. (2016, Mar 07). Retrieved from https://studymoose.com/the-nonmarket-environment-of-mcdonalds-essay 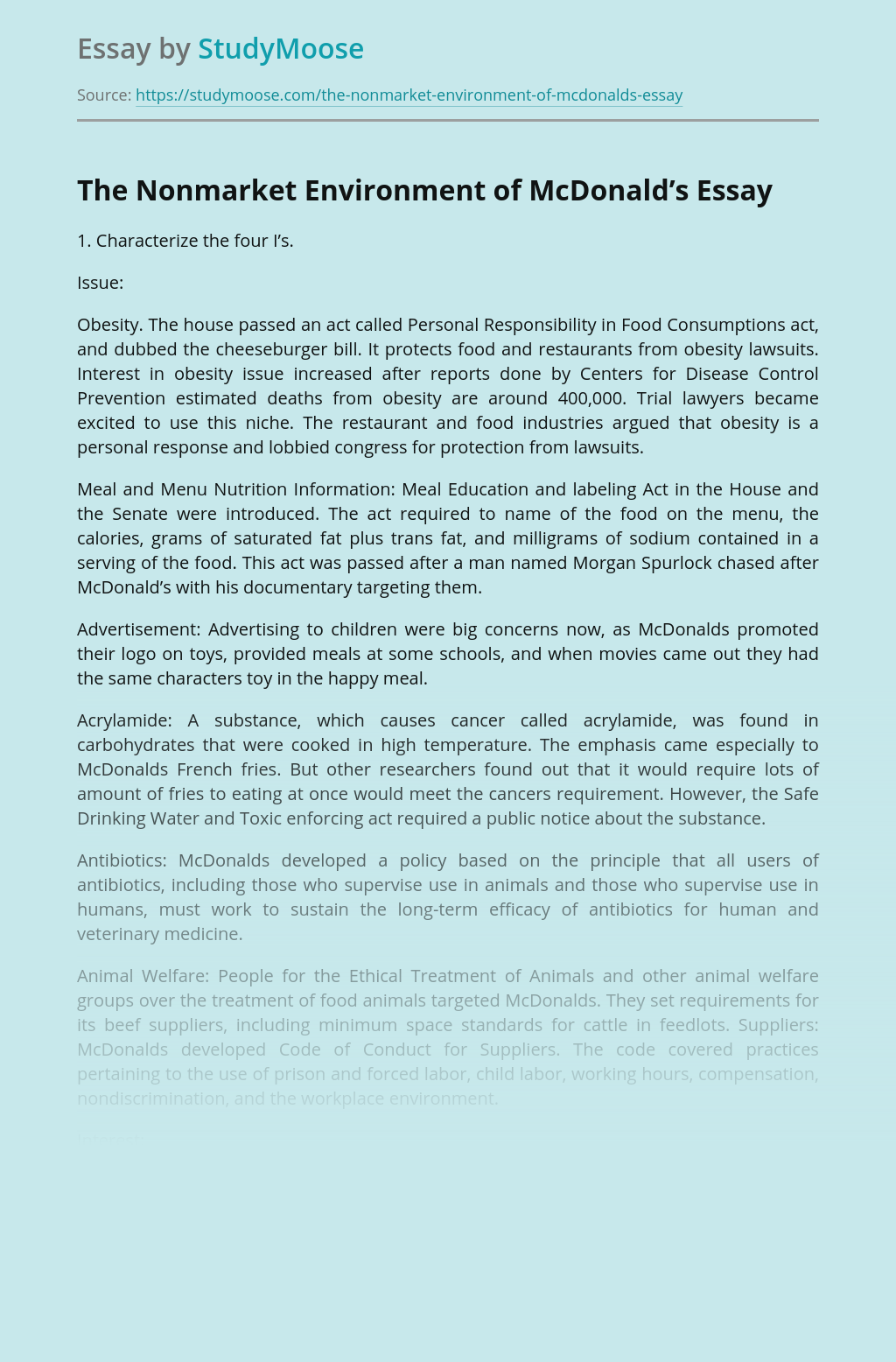 Turn in your highest-quality paper
Get a qualified writer to help you with
“ The Nonmarket Environment of McDonald’s ”
Get high-quality paper
Helping students since 2015
Stay Safe, Stay Original