The Naval Blockade Of The Japanese

The naval blockade of the Japanese held islands dates back to decades ago when the Japan attacked the United States and its allies. It is referred to as the pacific war and it involved the attack on Pearl Harbor which led to a serious conflict of the Second World War. The war continued until the year 1945 when the United States staged two atomic bombs in Japan. The first one was dropped in Hiroshima and the second one in Nagasaki.

After a few days, Japan admitted to defeat and gave up the war, Davis (1-3).

Don't use plagiarized sources. Get your custom essay on
“ The Naval Blockade Of The Japanese ”
Get custom paper
NEW! smart matching with writer

According to The Citizen’s Compendium, Japan was unable to send supplies and troops to support Okinawa which exposed Japan to danger of attacks since Okinawa is an entrance to Japan. The Japanese government became defenseless as they were also stopped from exploiting power in the neighboring countries. This increased Japans vulnerability to attacks by the United States which would adversely affect it economy and citizens.

Therefore, the situation rendered the Japanese government helpless compelling it to give up so that they avoid the drastic effects that naval blockade would cause on the country’s economy and security for the good of the people of Japan.

Naval resources are very critical for Japan’s market and have a big impact on the financial systems in the country. Naval blockade would have caused a huge drop in the republic’s productivity. During the war, Japan was unable to supply ore to the steel industry which was in need of tons of ore required for steel production, Bell (2000, 76).

Japans economy relies heavily on importation and therefore they would not be able to produce if the United States would have imposed naval the blockade on Japan’s islands. As the war progressed, importation dropped off which ruined the economy of Japan significantly. The American submarines went ahead and disconnected Japan’s petroleum supply line in the year 1944 which adversely affected the country. It paralyzed air fleets and sea fleets which could not operate as the country relies on imported petroleum. This weakened the Japan military as they were unable to work without the supplies, Yust (2009, 5)

Summary It is these extreme effects that brought Japan’s government to its knees. This decision to surrender was very critical for the Japanese government in the view of the fact that naval blockade goes beyond power over the sea and has a grand effect on a nation’s economy. If Japan would not have given up the war, citizens would have starved as well as the military force. If Japan would not have surrendered, the United States would have deployed its navy to patrol waters around Japan which would have completely blocked importation into Japan.

This means that the U. S. would have controlled Japan from shipping equipment, tools, and even food. They also would not have been able to export their products such as steel and machinery which would have triggered total destruction to Japan’s economy. The Japanese could have starved leading to massive deaths as they would have had nothing to feed on. The food produced internally by the Japanese can not be enough to cater for all the civilians as well as the military force. Food is a basic need, the workforce especially the military would not operate without food.

Therefore, it was wise for the Japanese to surrender because the naval blockade could lead to severe effects.

A new Survey of universal knowledge.

The Naval Blockade Of The Japanese. (2016, Aug 04). Retrieved from https://studymoose.com/the-naval-blockade-of-the-japanese-essay 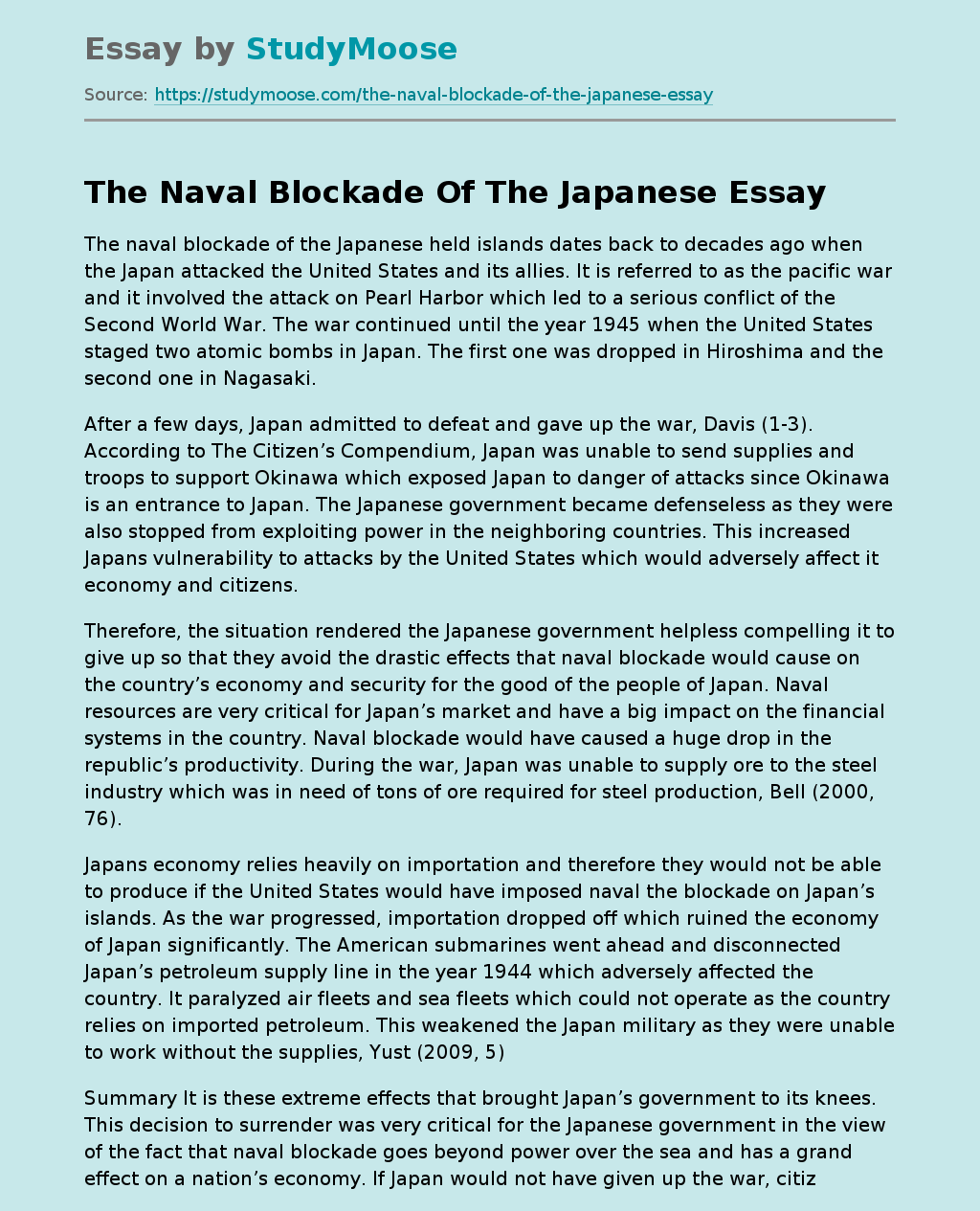