The Nature vs. Nurture Debate in Psychology

Nature vs. Nurture is a well-known psychology debate that questions the behavior of humans. Are certain behaviors inherited (nature) through genetics or are they acquired (nurture) and mimicked over time? (Nature vs. Nurture in Psychology, McLeod). The first World War was an introduction to devastating technological warfare. Battles were fought based on natural instincts rather than hours and hours of strict training as there was no way to prepare one for what soldiers were to face on the battlefield. The nature of all humans is one of animalistic traits.

Don't use plagiarized sources. Get your custom essay on
“ The Nature vs. Nurture Debate in Psychology ”
Get custom paper
NEW! smart matching with writer

When in times of chaos and conflict, human nature overrides the nurture we have been taught to adhere to resulting in primal instinct based reactions. When put under stressful situations, humans resort to ‘Survival of the fittest’, completely disregard nurture, and are later horrified by the actions we chose to make under the influence of nature. ‘Survival of the fittest’ is the notion that it is every man is for himself. Under the influence of nature, the concept of ‘survival of the fittest’ heavily influences actions and thoughts rather than the notion of ‘no one man left behind’ commonly taught to us as children.

In chapter one of Remarque’s text All Quiet on the Western Front, protagonist Paul describes the death of a former classmate, “Strange to say, Behm was one of the first to fall… he failed to keep undercover, and so was shot down before anyone could go fetch him.” (12). Paul recalls the events with such nonchalance that the reader can assume the Paul feels as though Behm’s negligence was the cause of his death as he had not properly kept himself undercover which suggests that he was not fit to be fighting hence Behm did not survive.

Paul’s nature allows him to use ‘survival of the fittest’ as a means of justifying Behm’s death. The fundamentals of human nature allow us to completely override nurture when in times of high stress. In chapter four of Paul Freire’s Pedagogy of the Oppressed, Freire states that “Domination, by its very nature, requires only a dominant pole and a dominated pole in antithetical contradiction;” (Chapter 4). The reader invokes that human nature compels humans to want to dominate and control others. The lust for power prevails over the nurture, the basic principles of established hierarchy. Furthermore, in chapter three of All Quiet on the Western Front, Paul, Haie, Tjaden and Kropp attack their commander Himmelstoss for his brutal training methods. Remarque writes, “ we always reckoned that later, at the end of the war, we would have our revenge on him.” (47).

There would have been very serious consequences if Himmelstoss were to have been able to identify his attackers but the nature of the boys overpowered their rational thoughts and made it imperative that they got revenge on their commander for his oppressive styles of training. The consequences of our actions and decisions made under the influences of nature can be horrifying. One can see that Paul’s nature-based actions made in chapter nine of All Quiet on the Western Front horrify him after he comes back to his senses. The text says, “I would give much if he but stay alive.” (221). This suggests that Paul feels tremendous guilt after stabbing the French soldier and is horrified at how he acted with blatant disregard for the life of a fellow human. Overall, human nature dictates how we act and think in high-stress or chaotic environments, rather the nurture. Our primal instincts outweigh any nurture-based thoughts and are triggered in times of questionable doubt.

The Nature vs. Nurture Debate in Psychology. (2021, Apr 19). Retrieved from https://studymoose.com/the-nature-vs-nurture-debate-in-psychology-essay 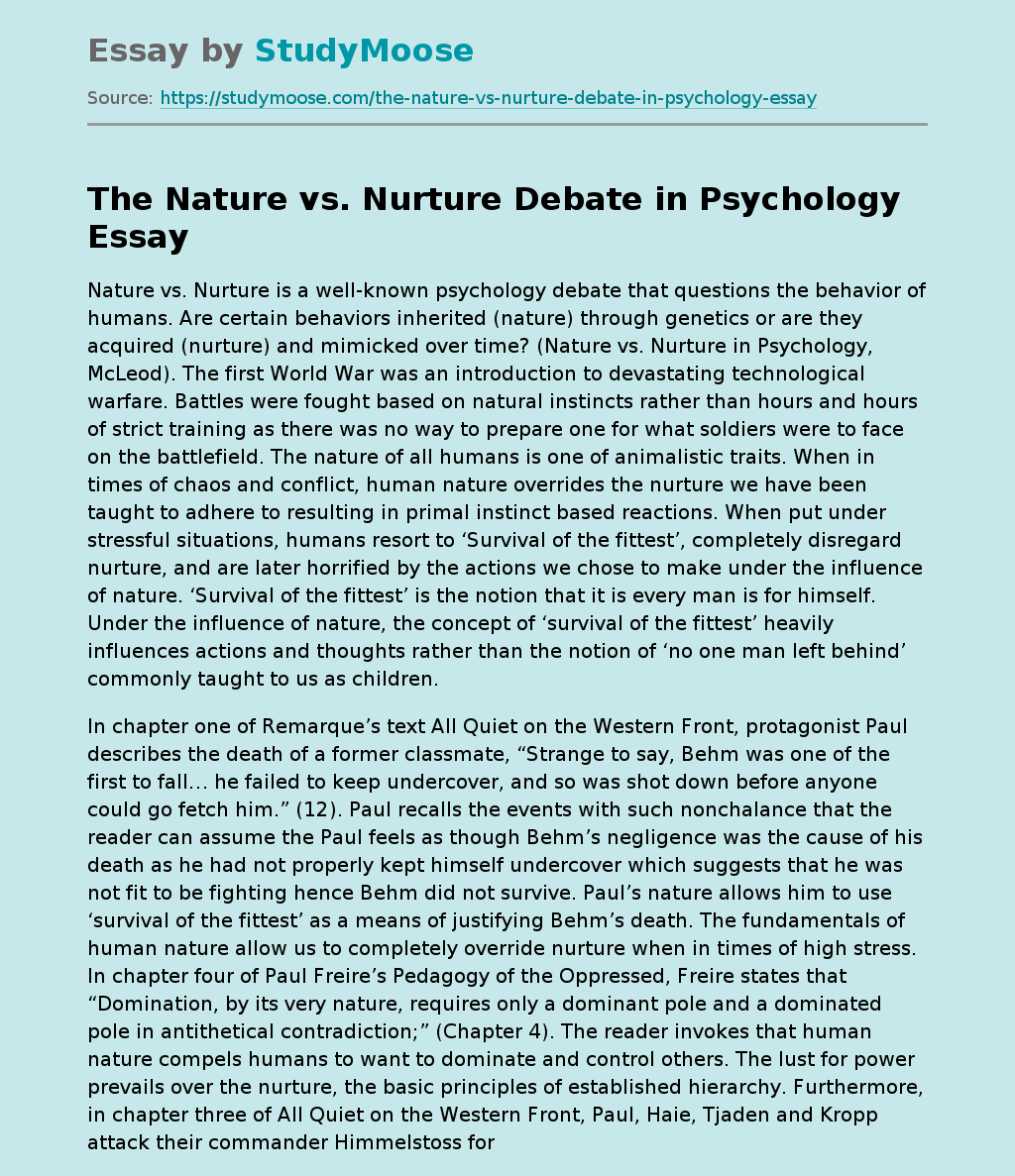