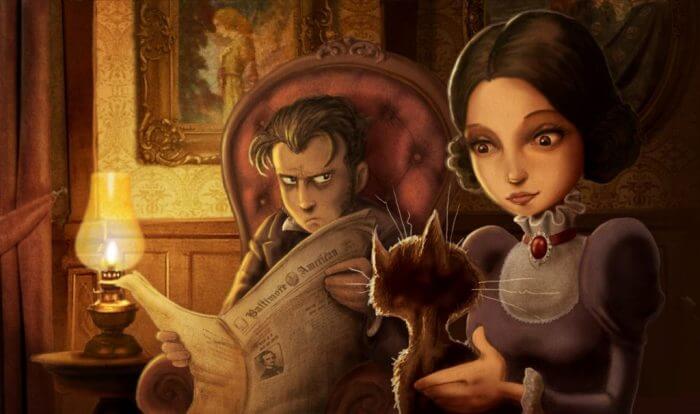 A novella, according to Edgar Poe, should be read in one breath. Powerful romantic charm and emotional potential is hidden in this brief narrative form and in the concentration of the climax. The novels of E.A. Poe are divided into several thematic groups: psychological or logical, sci-fi and detective ones. The writer’s tales tell about unusual  events fanned by romantic adventures of the main characters, the plot unfolds swiftly and fascinatingly, and the ending turns out to be interesting and unexpected. As for his horror stories, the main emphasis is made on the disintegration of the human personality which ultimately leads to tragic consequences.

The Essence of a Crime

In the novelistic direction of Edgar Poe’s writings the topic of crime occupies a significant place. Its intellectual interpretation is provided in detective stories, and thus the American writer is rightly considered the founder of this genre. In the thrilling stories Poe tries to show the inside of the psychic area of the crime. He is interested not in the social roots of crime, but in unmotivated actions that go beyond the normal behavior of a person in society. Alcohol becomes this dark side of the story The Black Cat, and it is what shapes and explains the personality of the narrator. In one of his darkest stories, Edgar Poe shows the terrible effect of alcohol on a person, the disintegration of the narrator’s personality, his transformation from the kindest animal admirer into a fanatic and murderer. All this, by his own admission, is the consequence of alcoholism – his “illness” and “demon.”

The story in many respects echoes with another novel by Edgar Poe written at the same time. This is The Tell-Tale Heart. Here, the story is narrated from the first person too, and this also suggests thoughts about the narrator’s insanity. But unlike the protagonist of The Tell-Tale Heart who told about his clear reasoning with the maniacal insistence, the hero of this story admits that sometimes he does not believe his own memories and does not even count on the fact that someone else will believe him.

In the story The Black Cat, the reason for the degeneration of the character, a man who initially was a soft, sensitive person who loved animals, is named directly. It is alcohol. Unfortunately, the writer knew very well what destructive effect it has on a person. The hero of the story is steadily degrading; his personality is changing. Previously, he adored animals, was devoted to his wife, a calm and kind person like him. But as he drank, the animals began to irritate him. He mocks the monkey and the dog, and only the black cat Pluto still evokes in him a semblance of respect and affection.

But one day a terrible thing happens and the narrator, in a fit of delirium, carves the cat’s eyeball. For a while, he hesitates between remorse and ecstasy with his own depravity. Finally, perversity wins, and the narrator hangs a defenseless cat on a tree in the garden.

Time passes, and the character finds a cat similar to Pluto, but with one difference – a white patch on the chest. He becomes attached to the cat, but the demon takes over again. The fondness of the cat makes him disgusted, and the cat itself is outstanding: the stain on its chest has a distinct form of gallows.

The protagonist can not resist his inner demon. He decides to kill the cat but kills his wife, who tried to protect the animal. He conceals the traces of crime prudently, but retribution overtakes him. Policemen hear the screams of the cat walled up with the corpse of the narrator’s wife.

In the novel The Black Cat mysteries and incomprehensibility appear first, and in the end appears the remorse of guilty conscience for the murder of a woman who dared to resist the protagonist in a moment of irritation. The degradation of the protagonist was explained by his constant drunkenness and hatred for the “look-alike” of the cat he once owned “with the gallows on his chest.”

Moreover, the story also suggests that a kind of dark side was always alive in the narrator’s soul, but it was hidden deep enough and did not cause him trouble. And only the strong and constant influence of alcohol called this to life, and the more he drank, the stronger this dark force became.

Amir as the narrator essay

The narrators quest for trout fishing in america essay