The Metamorphosis by Franz Kafka

A person is defined by more than his name, his occupation, or his family because he belongs to a greater universe where he is defined as a human, famous for imperfection and the conscience. However, the most obvious characteristic of humanity is governed by the dynamics of emotion. In Franz Kafka’s novel The Metamorphosis Gregor Samsa finds himself falling out of society and losing touch with humanity, and his loss of identity is furthered by his inability to understand emotion.

Don't use plagiarized sources. Get your custom essay on
“ The Metamorphosis by Franz Kafka ”
Get custom paper
NEW! smart matching with writer

The narrator’s presentation of human emotion, specifically kindness and anger, creates opposing tones of ambiguity and lucidity, a conflict that answers to a greater theme of the novel.

Situations where a sense of kindness is evoked indicate the narrator’s ambiguity. The first occurrence of this is when Grete brings Gregor food: “[In] the goodness of her heart…she brought him a whole selection of food, all set out on an old newspaper. There were old, half-decayed vegetables, bones from last night’s supper…[and] a piece of cheese that Gregor would have called uneatable two days ago” (91).

Gregor perceives her actions as benevolence, but the details suggest a different interpretation. The objects that Grete brings are garbage, which implies that giving food to Gregor is analogous to throwing it away. Thus, this passage, as presented by the narrator, can be interpreted in two different ways; it can be perceived from Gregor’s point of view, in which the feeding is an act of kindness, or it can be seen from a more realistic point of view, in which the family is simply giving him food that would have been thrown out anyway.

The fact that this passage can be read in two different ways, from personal perspective or an external perspective, indicates its ambiguous tone. This ambiguity is again portrayed when the sister cleans Gregor’s room. Gregor observes that Grete “always [pushes] the chair back to the same place at the window and even [leaves] the inner casements open” (98) and believes that she does so to allow him to stare out the window. He believes that her actions stem from the goodness of her heart and that they are done for his comfort. However, in the same passage, the narrator also relays that “hardly was she in the room when she rushed to the window, without even taking time to shut the door…and as if she were almost suffocating tore the casements open with hasty fingers, standing then in the open draught for a while even in the bitterest cold and drawing deep breaths” (98). Despite the fact that Gregor believes in Grete’s unselfish intentions, he watches her tear the windows open immediately when she enters his room.

This leads to the conclusion that Grete leaves the inner casements unlocked in order to open the window more quickly and easily, suggesting that the stench of the room disgusts her; the unlocking of casements is not for Gregor’s benefit, but for hers. The presentation of the same event leads to two different readings; kindness can be perceived from Gregor’s perspective, but from an external point of view, Grete’s actions are motivated by her needs, not Gregor’s. As with the first situation, the narrator’s tone is ambiguous, and the succession of these two events suggests a characteristic of the narrator. The narrator is a limited third person because much of the observations are limited to Gregor’s perspective, and since the narrator’s accounts waver in tone, Gregor’s perception is hazy as well.

Gregor’s inability to distinguish kindness is highlighted again with Grete’s actions. When Grete argues with her mother that clearing out the room is for the better, the narrator indicates that she “had in fact perceived that Gregor needed a lot of space to crawl about in” (103). This implies that her actions are done out of consideration for Gregor. However, the same line of thought produces other, more believable reasons: “This determination was…the outcome of childish recalcitrance and of self-confidence,…[and] another factor might have been also the enthusiastic temperament of an adolescent girl” (103).

This seems to be a more practical explanation for her actions because Grete is a dynamic character who changes from the passive sister to a bright, young woman, and the process of this transformation encompasses all the adolescent stages of stubbornness, moodiness, and confidence. The narrator thus juxtaposes a reason evocative of kindness against multiple reasons indicative of realism. The fact that Gregor acknowledges all of these reasons and yet still forces himself to believe in kindness implies that he is losing his ability to understand human actions, thus losing his perception of reality.

Considering all the instances of supposed kindness, the narrator appears to fluctuate with his presentation of events, using one description to suggest
kindness but implying that a second interpretation is more plausible. Also, since he is limited to Gregor’s perspective, Gregor’s perception is also ambiguous. However, this changes in situations in which anger, not kindness, is the emotion in question. The narrator’s ambiguity turns to clarity, and Gregor, even with his lack of human understanding, is able to feel the power of anger. The most blatant show of anger occurs when Gregor’s father attacks him with apples. The narrator indicates that “it was clear to Gregor that his father had taken the worst interpretation of Grete’s all too brief statement” (107).

What follows this moment of complete understanding is a long, detailed passage of Gregor’s father, angry: “‘Ah!’ he cried as soon as he appeared, in a tone which sounded at once angry and exultant. […] He had filled his pockets with fruit from the dish on the sideboard and was now shying apple after apple, without taking particularly good aim for the moment” (108). The length and detail of the experience suggests that the narrator’s voice is solid and that the facts are concrete; the event is saturated with nothing but anger. The clarity in which the narrator relays the event indicates that Gregor completely understands the situation and that while he cannot perceive kindness, anger is easily distinguishable. Gregor can understand anger when it is directed at him, and he can also recognize it when it infuses others. When Grete discovers that their mother cleaned Gregor’s room, she throws the family into chaos:

[Grete] burst into a storm of weeping, while her parents…looked on at first in helpless amazement; then they too began to go into action; the father reproached the mother on his right [and] shrieked at the sister on his left…; the sister, shaken with sobs, then beat upon the table with her small fists; and Gregor hissed loudly with rage because not one of them thought of shutting the door to spare him such a spectacle and so much noise. (115)

Even without being directly involved, Gregor feels the heat of anger among the family members and reacts with a similar emotion, rage. He can identify the emotion even when it is not directed at him, suggesting that despite his inability to accurately recognize kindness, he can perceive anger. The narrator, too, is clear on his perception of the event, describing it with long syntax and extended sentences to achieve the effect of an escalating, drawn-out argument. As with the previous incident, the mood of this event is pure anger and cannot be interpreted any other way.

Gregor’s perception of anger is further developed with the incident of the three lodgers. In this situation, Gregor is neither the direct focus of anger nor is he directly connected to the players of emotion. Before, his understanding of anger could be attributed to the fact that he was the target or to the fact that he was close to his family and so could understand them. However, here, Gregor stands outside of the event and simply observes: “They now began to be really a little angry[…]. They demanded explanations of his father, they waved their arms like him, tugged uneasily at their beards, and only with reluctance backed towards their room” (122). Even without the excess of detail and description, as with the first two cases, Gregor feels the tension and anger among the men.

In addition, the narrator develops a heightened understanding of anger, conveying it clearly with fewer words and with less obvious situations. The importance of the narrator’s clear portrayals of anger relates back to his ambiguous pictures of kindness. He is inconsistent in his presentations. If the narrator had an ambiguous tone, then the story would be comprised of vague accounts alone, and that would characterize his style of narration; similarly, if the narrator had a clear tone, then all events would leave no room for interpretation. However, because the narrator is both ambiguous and clear, his style of presentation is inconsistent. This inconsistency, though, develops the greater significance of the novel, the theme of hopelessness.

The Metamorphosis by Franz Kafka. (2016, Jul 20). Retrieved from https://studymoose.com/the-metamorphosis-by-franz-kafka-2-essay 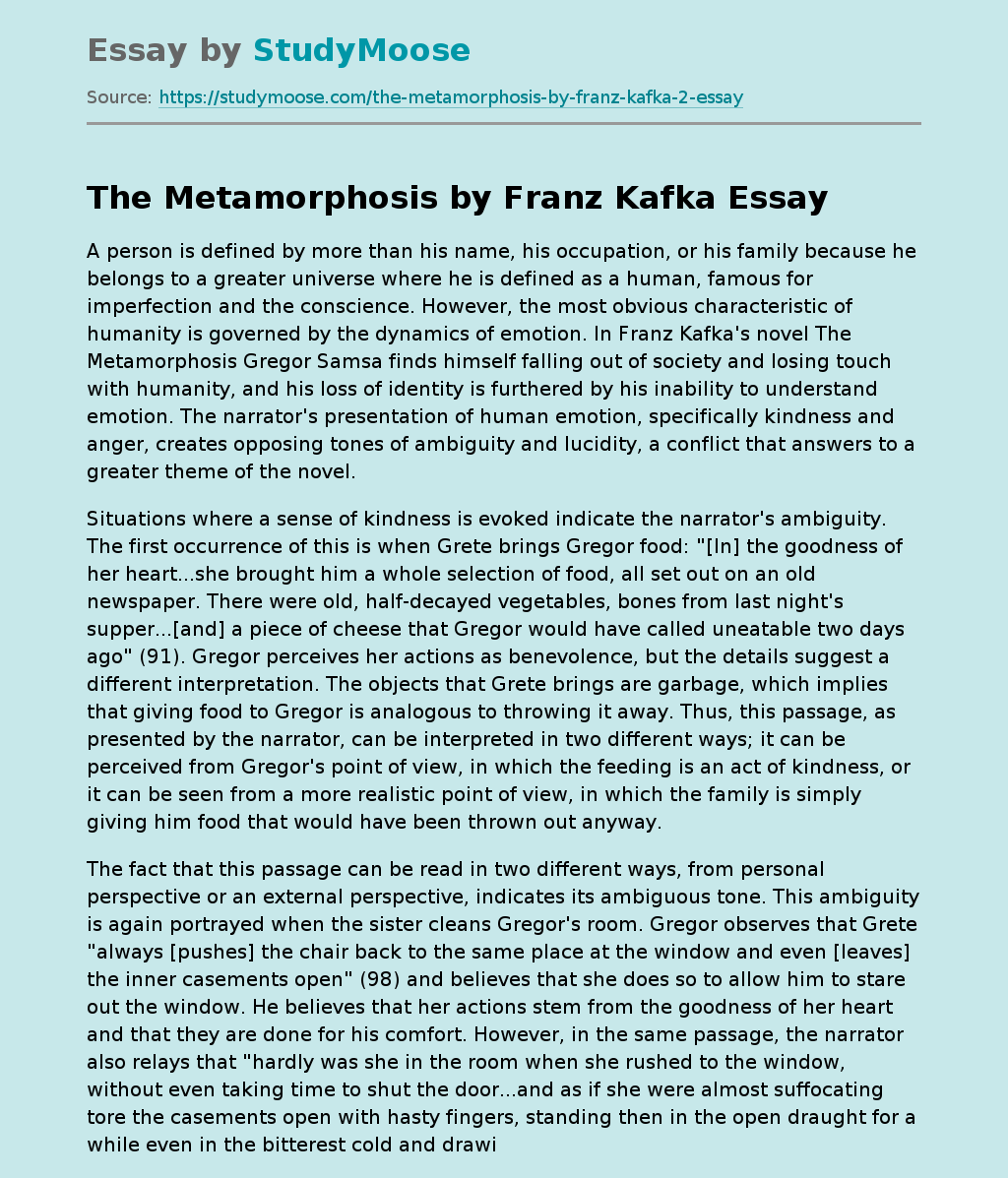