The Meaning of Suffering in Buddhism and Christianity

Buddhism and Christianity are popular terms in the field of religion with several differences and similarities that might interest someone to look at vividly. The two religions contain a set of beliefs, values and traditions which exist together without conflicting with one another and help us to buoy our point of view and gave us tools to talk about our ideas. On the other hand, these sets of beliefs, values, and traditions may sometimes be conflicting and contradicting. This paper attempts to examine the two religions, their points of convergence, and their points of divergence.

Don't use plagiarized sources. Get your custom essay on
“ The Meaning of Suffering in Buddhism and Christianity ”
Get custom paper
NEW! smart matching with writer

Plenty of brilliant theoreticians and theological historians have argued favorably concerning issues pertaining to the connections between Buddhism and Christianity.

They claim that there were no obvious disparities in the character of Jesus and Buddha, especially in their enviable lives and teaching. This, in turn, has given both followers a touchstone on which they can return.

To begin with, I will take a vivid look at the convergence of Buddhism and Christianity. Both religions rely heavily on individual wellbeing as well as their keen interest in the betterment of others. Both Buddha and Jesus Christ made human welfares their watchword and pass this down on their follower through the contents of their daily teachings. This is evident in the Holy Bible, “Therefore all things whatsoever ye would that men should do to you, do ye even so to them: for this is the law and the prophets” (Matthew 7:12, New King James Version). This is a pointer to the fact that they both encourage their followers to always do well to others.

They also made themselves an example of whom their followers can look up for guidance.

Both Buddhism and Christianity place unconditional and equal love for human beings as their focal point. According to Buddhism, this love should be extended to human beings as well as other living things. Similarly, Christian doctrines are based on the principle of loving a neighbor as much as one loves him/herself. This special kind of love usually referred to as Agape by Christians, begins at individual levels and should be extended to all people, including friends and enemies.

Both Buddhism and Christianity place their followers on moral directives. Both religions have laid down rules for their followers which are tagged commandments. Instances can be seen in the Ten Commandments for Christianity and the Five Precepts for Buddhism. Their contents have similar implications which offer guidelines to their followers. The directives are similar and direct: no killing, no stealing, no lying, no adultery or sexual impurity.

In addition, the doctrines of Buddhism and Christianity also teach about perseverance, long-sufferings and hardships of life. Through the life of Jesus Christ, Christians learn about enduring and handling sufferings. This was evident in His crucifixion.

Despite the robust similarities between Buddhism and Christianity, there are distinctions that lie in them. Although, these distinctions are far from absolute. Buddhism lay sole claim on individual effort in enlightenment while Christianity premise every achievement in human life on God’s grace. Buddhism is a religion marked by an individual’s effort while Christians believe in God’s grace through salvation.

Moreover, both religions share different historical perspectives. To take a kaleidoscopic reflection on the historical background of Buddhism. Buddhist believe that Gautama, who became Buddha, was a human being without any divinity. This is completely different in Christianity. Christians believe that Jesus Christ was born of man and divine.

Last but not the least, Christians believe that they are formed and made in God’s own image while in Buddhism, no mention of the human creation story is found.

In conclusion, from the aforementioned, one cannot feign from the high possibilities of the interrelationship between Buddhism and Christianity. From the outset, i.e. their historical evidence, it is crystal clear that both religions share a symbiotic relationship in terms of their teachings and ways of life. In short, both religions has a direct influence on each other.

The Meaning of Suffering in Buddhism and Christianity. (2020, Nov 15). Retrieved from http://studymoose.com/the-meaning-of-suffering-in-buddhism-and-christianity-essay 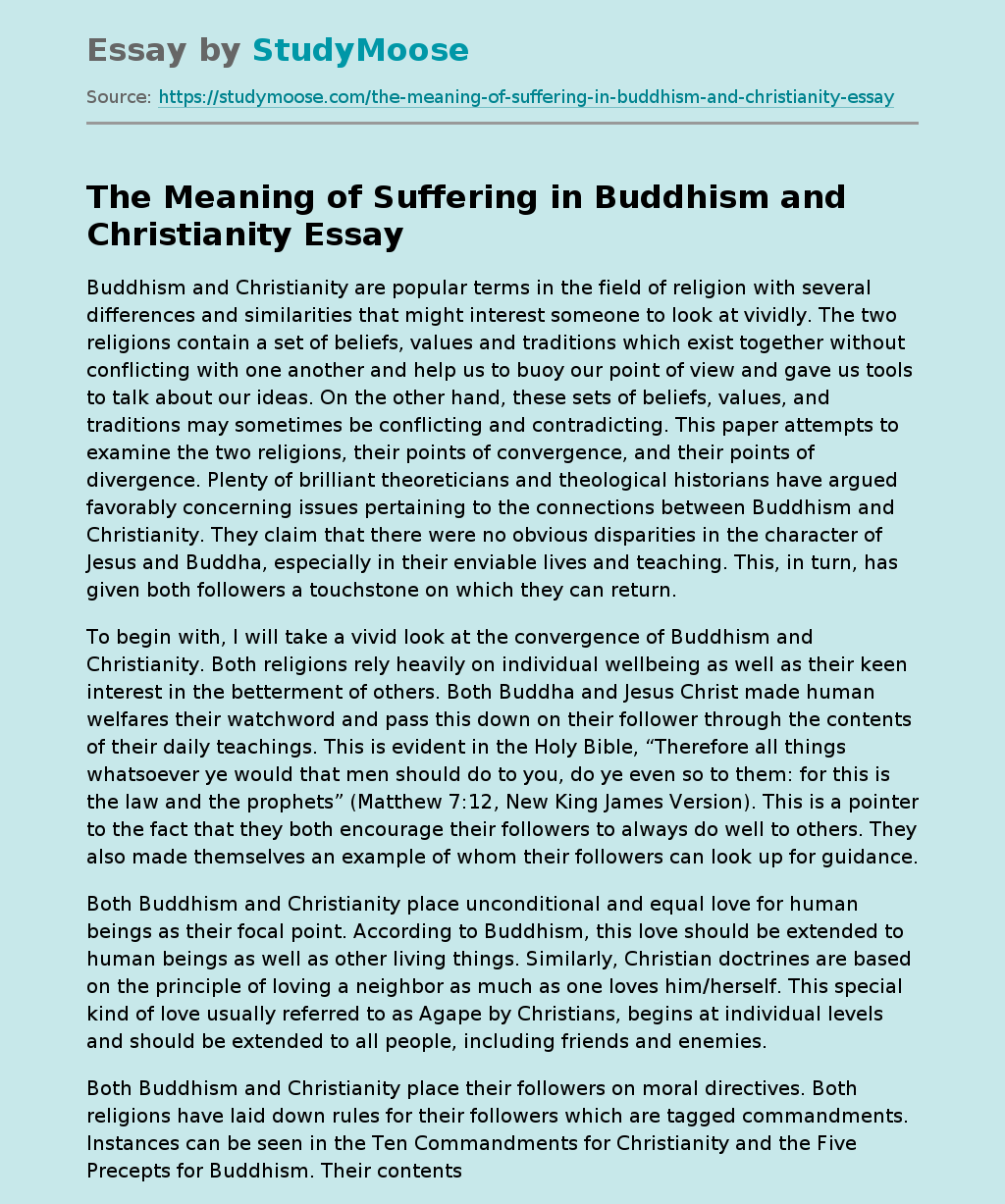