Compare and Contrast Buddhism and Christianity

People have believed many different things among the history. Some ancient people believed the sun, fire, evil, god or gods, sculptures … etc. And some of them not needed to believe in such things. The main reason they believe such that things is their weaknesses under the nature. They cannot understand the natural events and they think there must be a honorable power that controls the nature and the universe. These led people to believe in religions. There were many religions people believed in the history.

Don't use plagiarized sources. Get your custom essay on
“ Compare and Contrast Buddhism and Christianity ”
Get custom paper
NEW! smart matching with writer

Two of these are christianity and buddhism. They have different and similar features in them. We can compare and contrast them in different categories.

Buddhism and Christianity are two of the world’s greatest and most influential religions. The Christian religion, like all other religions has its strengths and weaknesses in our modern society. Perhaps the strengths out weight the weaknesses as this is one of the largest religions in the world. Hundreds of people follow the Catholic/Christian religion yet still a greater number follow yet other religions.

Perhaps this is because they see the weaknesses or perhaps it is simply because their parents have taught them that it is a sin to follow this religion. We define as “Christian” any person or group who thoughtfully, sincerely, prayerfully regard themselves as Christian. This is the definition that pollsters use. However, it includes the full range of faith groups who consider themselves to be Christians, including Assemblies of God members, Presbyterians, Roman Catholics, Southern Baptists, United Church members, Jehovah’s Witnesses, Mormons, etc.

Many Christians have a much less inclusive definition of the term “Christian.” Buddhism is an offspring of Hinduism, and it is similar in many ways to Hinduism. It began in India in about the 6th century B.C. and from there it spread throughout Asia. Today it is found mainly in Japan, China, and the Far East. Very few people in India itself are Buddhists today. The system was begun by Gautama Buddha. He was born about 563 B.C. and raised in a very wealthy family where he was protected from problems and suffering. Later he was exposed to suffering and became concerned with the cause of it. At age 29 he left his wife and son to seek a solution.He tried and rejected both Hinduism and extreme self-deprival (asceticism). After 6 years of seeking, he arrived at the system that became Buddhism. He established an order of monks and one of nuns devoted to his plan of overcoming suffering, then he spent the rest of his life as a wandering religious teacher.

Buddhists do not share most of the core beliefs of historical Christianity. Buddhism does not completely reject the Hinduism Gods, it does not see them necessary. At the same time, Christianity has its one and only God, who comes in three faces, The Father, The Son and The Holy Spirit. The Christian founder, Jesus Christ was the Son of The Father, God, while the founder of Buddhism, Siddhartha Gautama was a normal human being, who achieved enlightenment through meditation and later on was referred to as The Buddha. This brings us to the second major difference, the existence of the supernatural.

Buddhism, Christianity and all of the other major world religions share a basic rule of behavior which governs how they are to treat others. Both of these religions are mostly accepted by people who are under pressure of the strong people.

Buddhism worships either no god or else false gods. It teaches that man must save himself over a period of many lives by human effort.The gospel provides the only true way to worship the only true God. It provides a way for man to be forgiven by the death of the Son of God who paid the penalty for our sins. To receive the benefit, we must trust Jesus and obey Him in this life. Then we have the hope of eternal life.

Compare and Contrast Buddhism and Christianity. (2016, Jul 15). Retrieved from http://studymoose.com/compare-and-contrast-buddhism-and-christianity-essay 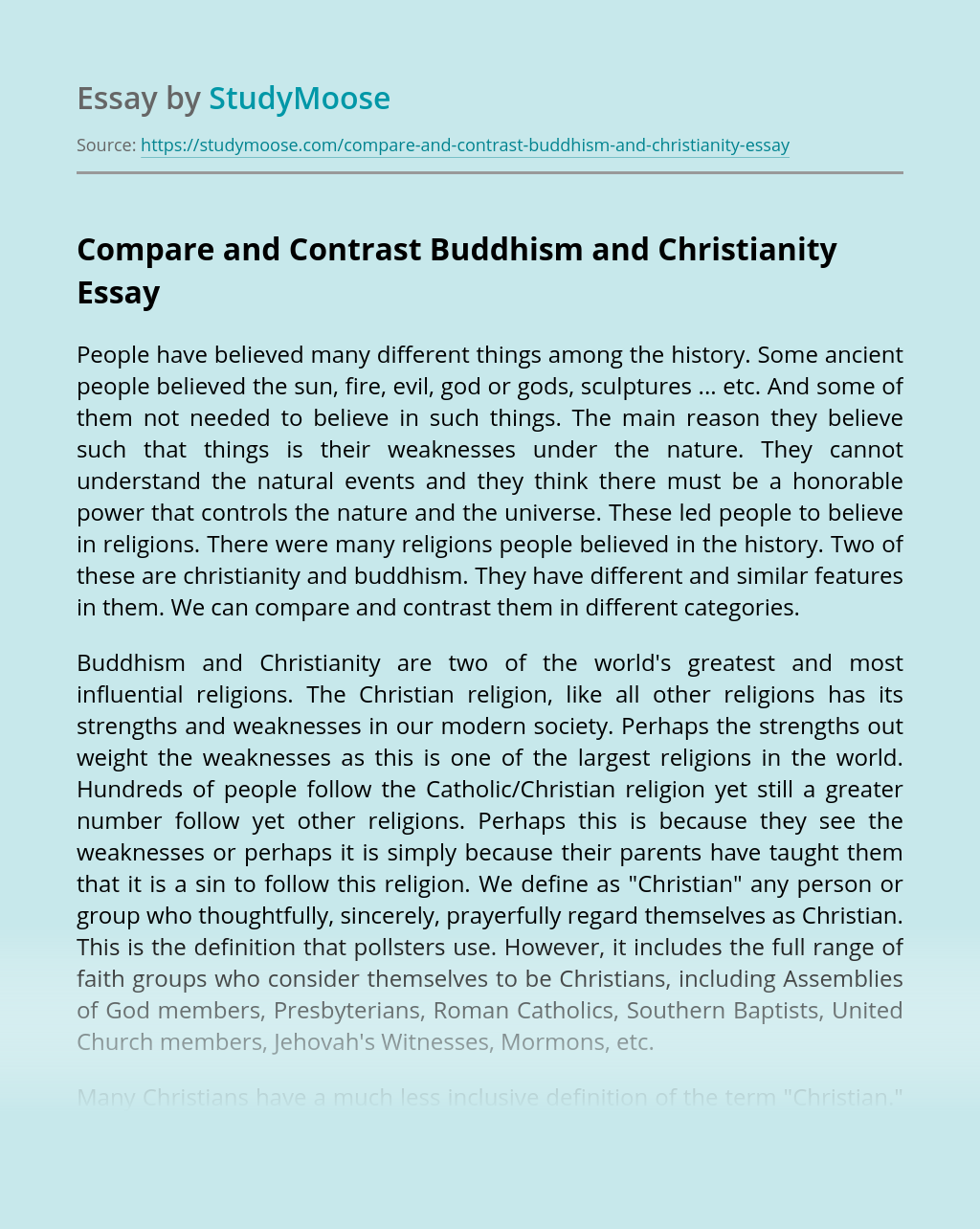