The Meaning of Jeannette Walls' "The Glass Castle"

In the exposition of Jeannette Walls’ reflective memoir, The Glass Castle, the reader meets Jeannette, the author, for the first time, as she rides in a taxi, on her way to a party. During the ride, she sees a homeless woman rummaging through the trash, she then comes to realizes it is her mother. This deeply disturbs Jeannette, so she asks the taxi driver to take her back to her house. When Jeannette gets home she looks around at all her expensive things and starts reflecting on how she became an extremely successful journalist, while her mother lives on the streets.

Don't use plagiarized sources. Get your custom essay on
“ The Meaning of Jeannette Walls’ “The Glass Castle” ”
Get custom paper
NEW! smart matching with writer

When Jeannette is at the age of three and cooking herself a hotdog, the inciting incident occurs. She bends over to feed one of the hotdogs to her dog Juju and her tutu catches on fire, burning her stomach, ribs, and chest. Her family rushes her to the nearest hospital, where the doctors use skin grafts to treat the burns.

During her time at the hospital, Jeannette grows to like the order and quiet. Jeannette also enjoys the way the staff treats her. Dad does not want to pay the hospital bill, so he checks Jeannette out of her hospital room during the middle of the night “Rex Walls style” and the family quickly moves to a new place.

During the next couple of years, the rising action happens, the Walls family, Mom, Dad, Lori, Brian, Maureen, and Jeannette, travel around the South-Western United States. During this time, Jeannette nearly drowns while learning to swim, Dad hangs Mom out a window, Maureen wakes up next to a rat and more.

Dad cannot keep a job, and Mom refuses to find one, as it interferes with her painting, so the Wall’s move often. Eventually the Walls’ become desperate, with no money or house they only have one place to go, Welch, to live with Dad’s mom, their grandmother, Erma.

She makes the kids sleep in the cold basement and she molests Brian, Mom and Dad worry about Erma kicking them out so much that they do not do anything. Dad eventually saves up some money and buys the family a tiny shack with no indoor plumbing, here, Dad says he will begin to build the foundation of their new house called The Glass Castle. Brian and Jeannette help to dig up the foundation hole but after a while they fill the hole up with trash. Their family is running out of money and on the brink of starvation when Mom finally finds a job. Meanwhile Dad drinks away every paycheck. Jeannette tries making a budget to save their money, but Dad still manages to take money from her.

In the memoir, the climax happens when Jeannette’s dad beats her, he does this because she back talked her mother. After this Jeannette realizes that her father does not actually care for her the way he should. All the faith she had in her father disappears, she finally realizes just how broken her family is. Now Jeannette wants to leave her parents and take all her siblings to New York City, where she has a chance at becoming a successful writer and Lori can become an artist. Jeannette finds a job and begins saving up for a bus ticket in a piggy bank. One-night Dad smashes the bank and steals the money in hopes of keeping his kids at home. Eventually the kids save up enough to send Lori to New York.

The Glass Castle’s falling action happens when Jeannette joins Lori in New York, followed by Brian, and eventually Maureen. For the most part the kids live a happy new life in the city. Shortly after they arrive in New York, their parents follow them. Mom and Dad move in with the kids and pay no rent. Eventually the kids grow tired of this and kick them out on the streets. After Maureen has enough and stabs Mom, she ends up in a mental hospital and later moves to California. Brian gets a job as a cop, Jeannette becomes a successful journalist, and Lori a successful artist, meanwhile, Mom and Dad start squatting in abandoned buildings. Not long after, Dad becomes sick, he says goodbye to Jeannette and she finally accepts the fact that she had an awful childhood, but it made her who she is.

In the book, the resolution takes place at the end during Thanksgiving. Jeannette is having a mini-reunion at her and her second husband’s home. Lori, Brian, and Mom all come over for dinner. Before everyone eats they make a toast to Dad, and spend the night telling wild stories about Rex Walls.

One major theme in this memoir is forgiveness. Jeannette makes it clear throughout the novel that she feels no resentment towards her parents or her horrible childhood. In the memoir it says, “Could she have solved our financial problems by selling this land she never even saw?” when Jeannette finds out her mom owns land worth millions of dollars. Still, Jeannette never gets upset with her mother or blames her for their life of poverty.

Throughout the Memoir the theme of forgiveness develops by becoming more truthful during the novel. Closer to the beginning of the story Jeannette gets upset with her mom and dad and tells them to act like parents, but at the end she Jeannette is happy where she is and is not at all disappointed in her parents nor does she hold a grudge against them.

Rex Walls, the antagonist of, The Glass Castle, is a static character. Throughout the duration of the story he is described as an alcoholic and he continues to be one until his death. He is also very carefree throughout the story, he does not mind living in a small shack nor does he mind being a squatter. In the story, Rex is described using both direct and indirect characterization. Jeannette describes his actions and his words, so the reader must use that to make an inference about him. On the other hand, Rex is described with words like thoughtful, reckless, and irresponsible.

The Meaning of Jeannette Walls' "The Glass Castle". (2021, Dec 07). Retrieved from http://studymoose.com/the-meaning-of-jeannette-walls-the-glass-castle-essay 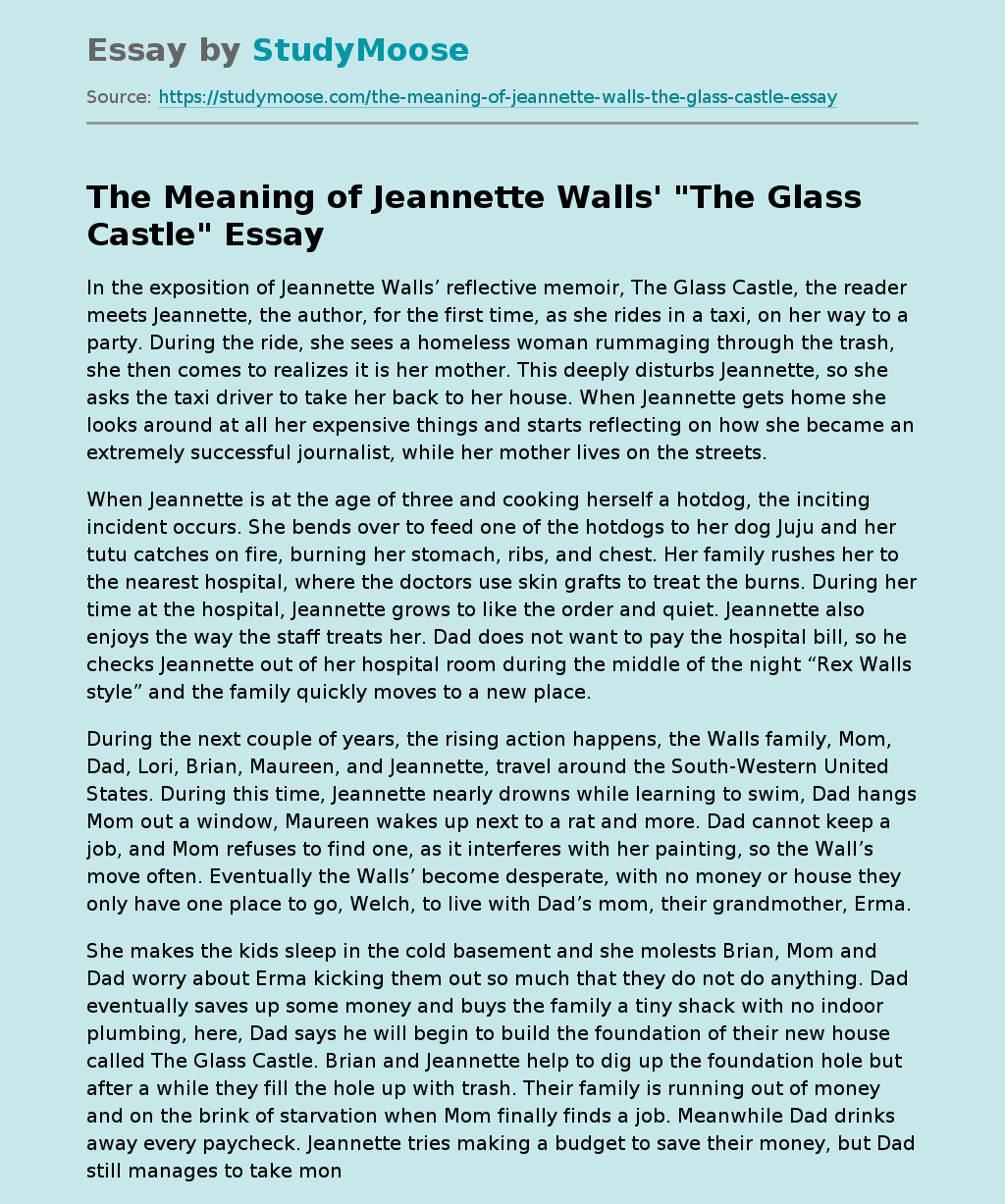