The main features of the Spartan Economy

In Sparta, the economy meant two things : the system of wealth creation and the state of the countrys prosperity. The economy has four essential features, natural resources, economic objectives (military state), distribution of land and the roles of Perioikoi and Helots. These features are inter-related and work together in order to achieve the economic objective, which was to maintain a military dominance. This priority of maintaining a military state, and the ineffectiveness of some of these structures eventually led to the decline of the Spartan economy.

Don't use plagiarized sources. Get your custom essay on
“ The main features of the Spartan Economy ”
Get custom paper
NEW! smart matching with writer

The geography of Sparta enabled provision of sufficient resources to the Spartans. The lands of Laconia and Messene, which were captured by Spartans (and the Laconians and Messenians enslaved/subjugated) became a good food source for Sparta.

These two regions had good agricultural land which provided crops in abundance. These crops included barley, wheat, grapes and figs. Apart from the agricultural products, they also provided meat, as they grazed sheep, goats and pigs, which also supplied products such as milk, skins, wool, hair, fat, cheese etc.

Iron, needed for weapons and armours was found in the Spartan territory itself, although they did have to import copper and tin to make bronze, which may have been for manufacturing utensils, statues, etc. Thus, it could be concluded that Sparta was a self sufficient area enclosed by natural barriers which protected rather than isolated it.

In Sparta, everything served a military purpose, everything subordinated to the art of war. The sole aim was to create “invincible” warriors and military dominance was maintained.

Therefore, the economy was designed to ensure that hoplite classes ( heavily armed foot soldiers or infantrymen) of Spartiates and Perioikoi (dwellers around, sometimes made to fight in war for Sparta) were rich enough to maintain a high level of professional training and equipment. Each Spartiate, therefore had to have a minimum income to pay for his mess dues and the state had to have income to pay for armour and equipment. This was achieved through the exploitation of Helots who produced foodstuff that : paid the mess dues, and was used to trade with Perioikoi that provided the armour and manufactured the goods needed by the Spartans. Thus everything was provided by the Helots, and the Perioikoi, thus making the Spartan economy depend on this supply, in order to maintain the military ! training needed.

In order to concentrate on military activities, citizens had to be free from the responsibility of providing for himself and his family. Therefore, these men owned a plot of land and were expected to make contributions to the mess from the produce of their land. All land controlled by Spartans was divided into allotments : each Spartiate held a portion of the land (the kleros), which were passed from father to son, and could not be sold. The community also owned common land which could be sold and divided, which led to inequalities in wealth, and made “communism” superficial. This is the one feature of the Spartan economy, which proved ineffective as time went by, and contributed ultimately, to its decline.

Again, as the Spartiates had military priorities, they could not cultivate the land themselves, but the Helots did. The Helots, were the local inhabitants of Laconia and Messene owned by the Spartan state. They were required to work the land for their Spartan masters in total subjection. In other words they were state – owned serfs with no political and legal rights. Of the produce, the owner was entitled to 105 bushels of corn for himself, and twelve bushels for his wife, along with some wine and fruit. All that remained, the Helots could retain for themselves, in return, providing aid and servants to Spartiates in war.

The Spartiates needed this produce for two things : to maintain the household, and to make a contribution to the mess, the “syssition”. The nature of contribution included each Spartiate contributing barley meal, wine, cheese, and figs and sums of money for fish or meat. Thus there was a certain interdependency between the Helots and the Spartiates, “discipline necessitated the existence of Helots and existence of Helots necessitated discipline”. Therefore, the Helots by doing their share of the work, enabled the Spartiates to maintain the equality in and contributions made to the Syssition, by which the Spartan economy functioned properly.

The Perioikoi or dwellers around” were people living in towns and villages in Laconia and Messenia. They were free to live their lives as they wished although they were under the Spartan control. They took no part in Spartan government and were expected to fight for Sparta when a military emergency arose. They were also responsible for mining, manufacturing and commerce. All the minerals and marine resources of Laconia and Messene were in the hands of the Perioikoi. They procured metals and manufactured weapons. According to Pliny and Herodotus, they made shoes, purple garments and objects of wool and linen.

Gytheum was the main centre for delivery of imports and exports and this was controlled by the Perioikoi. As a result of the fact that currency of exchange was iron bas, the Spartans had no means of purchasing foreign goods so exchange was limited to essential items such as copper and tin to make bronze. Wool and flax tiles were also exported, pottery and bro! nze work exported to other Greek states. They made or imported chariots. They also shared in land division. According to Plutarch, Lycurgus distributed 30,000 allotments to individuals. Most Laconian craftsmen were also Perioikoi.

Evidence of the Perioikoi came in the form of archaeological artefacts. Examples include bronze figurines of Hermes, engraved gems, limestone funerary relief, marble – hero relief, bronze figurine of bull, all found in Perioikic states. Therefore, the Perioikoi played a vital role in the economy, as they : provided hoplites, procured metals, manufactured weapons, and manufactured clothing and other goods, all the essential ingredients of a military dominant state. Profits from trade and activities also went to Perioikic towns such as Gytheum.

The economy of Sparta began to crumble in the 5th Century. There are a number of reasons for this. The numbers of full citizens started declining rapidly. This occurred due to several factors : they died in the invasions against the Persians, they did in the earthquake of 468 BC, death due to revolts among Helots, and due t the fact that the relationships between Perioikoi and Spartiates declined, which was critical to the economy. Other reasons for the decline of the economy include, heavy and expensive involvement in war, expensive involvement in chariot racing, through combined effect of inheritance : limit to children and dynastic marriage, the land holdings went in the hands of few. The hatred of the Spartan class grew, few enjoyed benefits of land and the result was, disaster for Sparta.

Therefore, the sole aim of the economy was to maintain and efficiently run a military dominant state. Several factors such as the extreme interdependency between the groups such as Spartiates dependence on the Helots and the Perioikoi and other factors contributed and eventually led to the decline of the “Military Dominant” Spartan Economy.

The main features of the Spartan Economy. (2016, Jul 15). Retrieved from http://studymoose.com/the-main-features-of-the-spartan-economy-essay 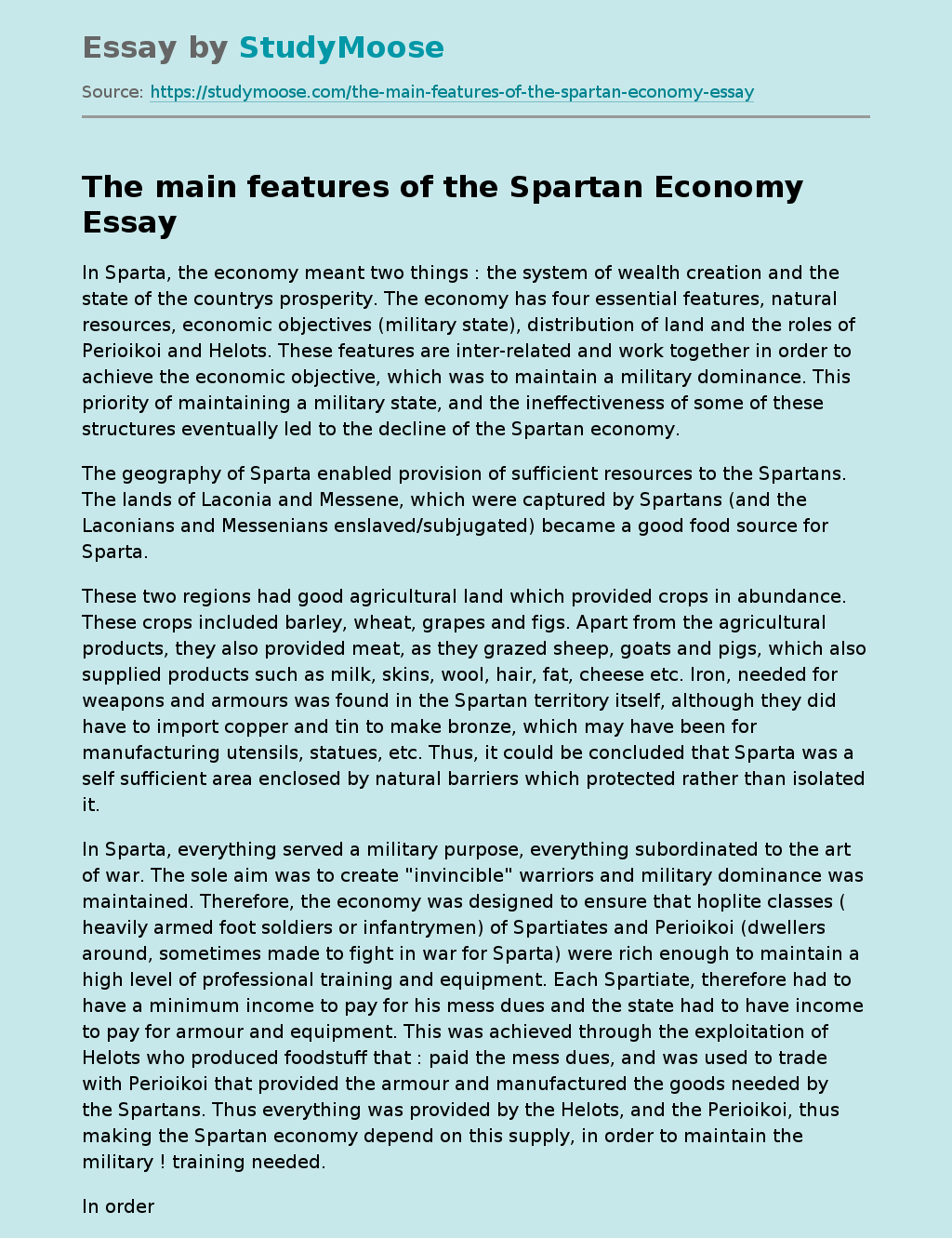