Retail banking can be defined as the offering of banking and financial services to the individuals and small and medium sized firms (SMEs). Today the retail banks are not just ‘high street’ banks with the physical presence in the towns and the cities of the UK, in fact the advent of phone banking and internet banking has added various services and characteristics to the scope of retail banking.

Moreover, there are ‘virtual’ banks which run on the internet and save themselves the costs of building and staffing and outsource their key activities of database maintenance, call centres and plastic cards production.

Don't use plagiarized sources.
Get Your Custom Essay on Features of Retail Banking Just from $13,9/Page

Due to these virtual banks there has been an increase in the competition and creativity for banking even though the fundamental principles banks are still the same as the branch based banks(Blake, 2000).

The loan products include: mortgage loans, personal loans, credit cards and overdraft. The key financial services offered are: insurance (health and general), life assurance, pensions, endowment assurance, stocks and shares, unit and investment funds, foreign exchange, money transmission and wills and trustee services. Retail banks that operate through branches are located in areas that are convenient and easily accessible by a broad base of potential and existing customers. Some of the features of retail banks are:

2. Internal promotions to cross-sell services: Retail banks also focus on using the internal and external space to promote their other services and hence, cross-sell. Inside retail banking, many posters, signs and boards can be seen with information about other services. Moreover, banking staff is encouraging towards catering to the information requirement of the consumers when they come to conduct their business and account related activities. New services are promoted as per the order of the day and brochures and pamphlets are provided to clarify all the details.

3. Customer relationship management practices: The application of Customer Relation Management is a growing interest in retail banking. This can be seen in the websites which are user friendly and assist the customers and provide them the information they would need. Moreover, the customers are even asked to provide feedback on the experience of the website and there is constant improvement that is done to make sure the customer satisfaction is there. The information from the customers can be used to gauge the areas of improvement, potential for new services and products and the experience of the customers inside the branches(Sharma & Kaur, 2003).

4. Extended hours, services and locations: When it comes to hours of operations, the retail banks have to adhere to the state regulations. The banks have a lot of strategies planned out for the customers so that none of the opportunities are missed. Hence, knowing that customer’s hours do not coincide with the banking, savvy technologies like the ATM machines have been deployed.

The ATM machines cater to most of the needs such as making deposits, account balance enquiry, transferring funds between checking and savings accounts as well as paying bills. This is all in accordance with giving customer touch points wherever they work and live and banking facilities are also accessed now at grocery stores, shopping malls, gas stations and restaurants. This is to make banking facilities available twenty four seven(Blake,2000).

5. New customer incentives: Retail banks follow the mission to increase their customers and they employ many advertising and marketing strategies to live up to this mission. These techniques include, broadcast television and radio advertising, print and magazine advertising and public relations efforts to sponsor national and local or private events.

Many retail banks provide cash awards on opening accounts with specific balances. This is because the overall goal is to increase the existing and potential customers. This can be done by banks getting information through the credit applications that are filled by customers to assess their credit worthiness and applications for approving new accounts.

Regulation is now a necessity to improve customer confidence and provide them with necessary protections by providing them with clear information about the services and products offered by the banks. This also allows for the reduction of criminal activity and frauds. UK is a prime example of the “Big Five” banks and this can lead to abuse of monopoly/oligopoly power(Shin, 2009).

The UK government was utterly shocked by the Northern Rock collapse, mainly because it made them realize that many other UK banks had become over concentrated in real-estate related risk. This was just an example of how retail banks were going to suffer considering that they mainly focus on loans. By 2008, for much of the banks which were running like Northern Rock, it had become quite obvious that it would be extremely difficult to rollover their maturing debt. Credit risks spreads continued to widen to very distressed levels and no bank trusted the other bank to repay any new debt.

To lend to mortgage customers, banks raise funds through either funds from retail and commercial depositors or from wholesale funding markets. Needless to say, Northern Rock had been unusual among the UK banks because of its heavy reliance on non-retail funding. Before the recession in 2007, only 23 percent of its liabilities were in the form of retail deposits. It had gotten funds from a combination of short-term borrowing in the capital markets and securitized notes. And right when the recession struck, the short-term lending market and interbank lending but all froze. The situation reached a level where there was no other bank to take over Northern Rock and hence, the Bank of England came in with its support which is usually the last resort.

The next morning, the bank’s retail customers stood in line to withdraw their deposits which is ironic because retail funding is the most stable form of funding for the banks. This was because even in the retail deposits, only a minor percentage consisted of the branch based deposits and the bulk of the retail deposits were being run as non-branch base deposits such as postal and telephone accounts.

As a retail bank seeking out to enhance its customer base, this form of non-branch banking enabled Northern Rock to expand their retail deposits beyond the regional limitations. However, these deposits turned out to be the most vulnerable towards withdrawal once the liquidity crunch hit. The money markets had lack of credit and due to its mortgage lending focus; it struggled a lot compared to its rivals.

Therefore, Northern Rock was one of the fist banks to be struck by the economic meltdown. It was mainly due to its dependence on the wholesale funding i.e. the money markets when the mortgage securitisation market buckled. Northern Rock has been particularly significant because it shows how virtually everything can go wrong with a bank.

Despite the constant emphasis on the fact that banks get into trouble when the depositors rush out to withdraw the funds, Northern Rock had been in trouble before this particular moment. Due to its heavy reliance on non-retail funding despite it being a retail bank, Northern Rock had no sub-prime lending. However, it had been fishing from the same pool of funding and difficulty started in renewing the short-term funding when BNP Paribas, the French bank, announced that it was closing three investment vehicles that invested in the US sub-prime mortgage assets using short-term borrowed money(Pond, 2007).

As any retail bank, the asset quality of Northern Rock was vulnerable to any drastic declines in house prices and rising unemployment. And like any retail bank, under a financial crisis, the prudent risk management by the lenders leads to a generalized retrenchment because they try to shed the risky exposures in order to meet the crisis and hence lend less. But for Northern Rock, it meant withdrawal of funding. Just like any retail bank, Northern Rock sponsored the local football team (Newcastle United) but it had positioned itself as the fifth largest bank of the UK by a measure of the mortgage assets.

Hence, what set the bank apart was not the fact that it used non-retail funding but the extent to which it relied on non-retail funding. One of the features of retail banking is the non-branch based banking and it has been a feature that made the depositors vulnerable to withdrawal and added fuel to the fire. Housing loans are a characteristic of retail banking and as we can see, for Northern Rock, in the absence of proper follow up and non repayment, it was one of the first institutions to be struck by the severity of the crisis.

To summarize the whole Northern Rock crisis, the US interest rates also play a role as they increased from 1 percent to 5.35 percent and the US housing market slowed down. Homeowners consequently began to default and default rates on sub-prime loans reached record levels. Following this, the investment bank BNP Paribas in France warns the investors that they would not be able to take out the assets because of evaporation of liquidity in the market and confirms the suspicions that banks are refusing to do business with each other.

Northern Rock emerges into the scene with financial support from the Bank of England and declares the need as a last resort. The next day, depositors are rushing out to withdraw their deposits and around £1 billion are withdrawn which is the biggest run on a British bank for over more than a century and people continue to withdraw until the government intervenes to guarantee their savings. Hence, Northern Rock which had been relying on the markets that had already dried up due to onset of credit crunch was now in deep trouble because the savers deposits comprised up of a less percentage than an ordinary retail bank. 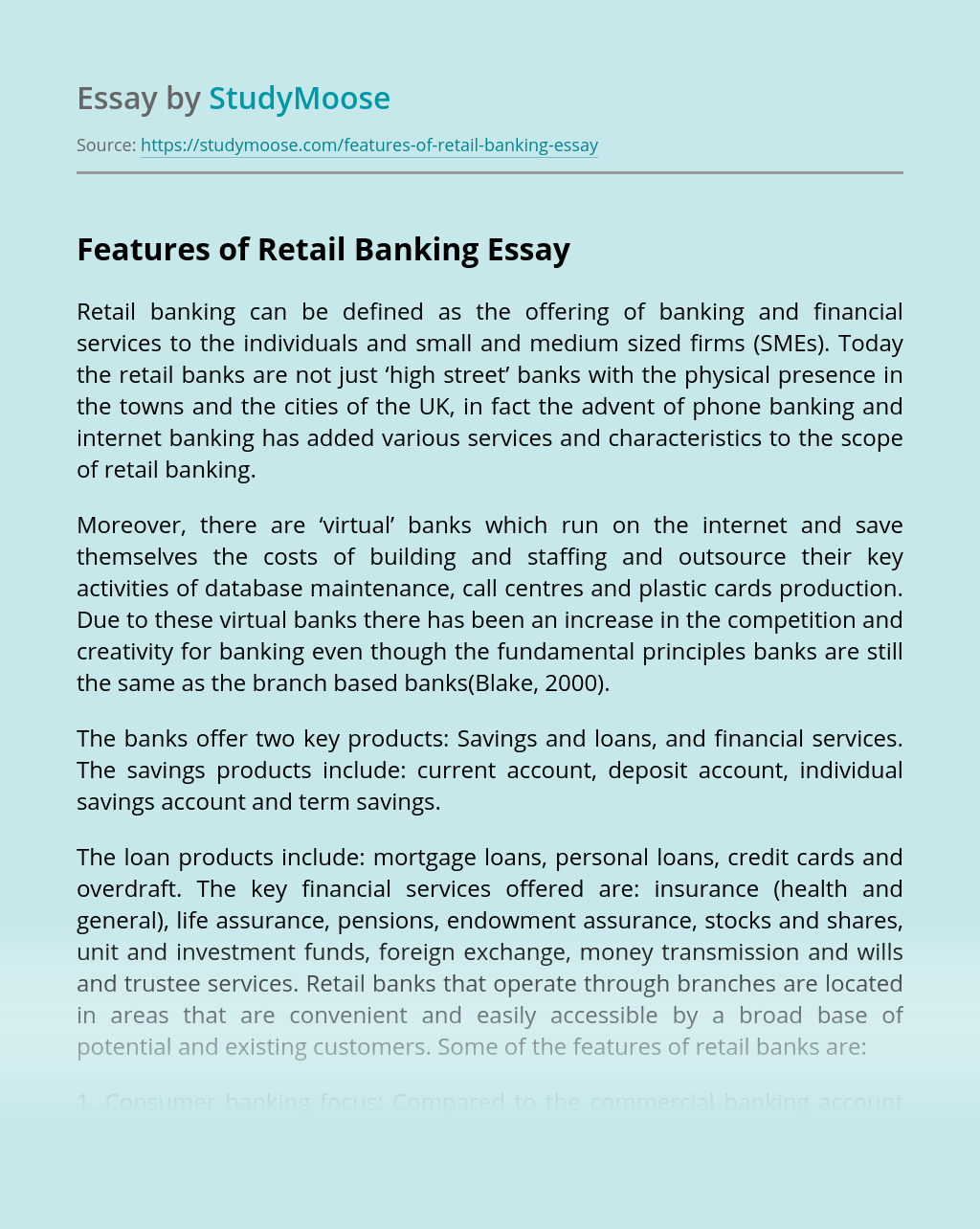 Stop All The Clocks, Cut Off The Telephone

Rate this post Stop all the clocks, cut off the telephone, Avoid the pet dog from barking with a juicy bone, Silence the pianos and with smothered drum Bring out the coffin, let the mourners come. Let aeroplanes circle moaning overhead Scribbling on the sky the message ‘He is Dead’. Put crepe bows round the...

Native Americans in the United States

Get Essay
Bikes vs. Cars

Rate this post Lots of people find it hard to differ a bike from a car. They normally choose the car and ignore the bike. Today in our country people are too lazy to see their similarities and just choose the one that’s easier to drive. Although they are similar by giving you transportation, they...

Function of Music in Theatre

Rate this post QUESTION #1 Discuss the dramatic functions of music in two works of Music Theatre, including some consideration of the relationship between music and other elements of the performance event. Music and drama have the capability of not only integrating to create spectacular visual and aural events in theatre, but they have a...