“The Lottery”: Unfair Fate to the One Who Draws

A society brainwashed in its traditions. Having lost the ability to recognize the traditions for what they are. The community follows their traditions blindly. Even when the traditions hurt their own citizens. In this paper, I will argue the symbolism of this treacherous event. The event where a marked paper is pulled by a person with an unfair fate.

The story is started out like any normal story. We are lead to believe the children are happy and the community is like any ordinary one.

Don't use plagiarized sources. Get your custom essay on
“ “The Lottery”: Unfair Fate to the One Who Draws  ”
Get custom paper
NEW! smart matching with writer

Shortly after we realize this is no ordinary story. This is one of horrible ethics that result in the lost life of a women. The author will tell the story by symbolism, the black box, white slips of paper, black spot in the middle of the paper, and the stoning.

The black wooden box, a symbol of unrelenting deep hole of pain. It represents a coffin. And black like the color of death. The definition of black meaning “steaming from evil, and the very darkest color owing to the absence of or complete absorption of light”.

This box holds power over the community almost like evil holds power over a victim in a scary movie. It also symbolizes that even though they hate the system, they are reluctant to change. People get into a schedule and stick to it no matter what the consequence.

The white slips of paper, “He dropped all the papers but those onto the ground, where the breeze caught them and lifted them off”.

This sentence is symbolism for the lives of the community and that it can be taken away at any given moment. I also believe it represents equality among them. That no one of higher status or lower status has the upper hand. Everyone is to be put in the box and equally draw. Everyone in the community is susceptible to the draw of the lottery winner no matter what your financial status looks like.

The black spot on the slip of paper, represents a mark. Usually marks mean someone is “damaged” or “no good”. When you fail something, such as a report card. When you are underage and you are marked with a big black x. Marks are always made to stand out, as if the person doesn’t fit in or belong.

Stoning, the equal opportunity punishment. Where everyone can participate freely and excitedly. The symbolism isn’t that someone is being murdered or that people are watching and doing nothing. It is that everyone takes place in the murder. The stones are significant because even the children gather the stones. Tessie-who gets stoned, her little boy Davy picks up stones that contribute to her death. The stoning also shows humans instinct to violence. Everyone is friendly to Tessie until she is the one to pull the card and is told “be a good sport” when she cries out.

Shirley Jackson tells the story of “The Lottery” by the above symbolism. Every single detail playing a major role. A story of The Lottery, Shirley Jackson reveals: “an annual ritual of sacrifice in a small town and the dangers of blindly following tradition” The Lottery represents the actions, behavior, and idea that is passed down from generations to accept and follow this tradition. The Lottery continues simply because that’s all the town people know. The result of this tradition is that everyone is a part of a murder annually, even when it is one of your own.

“The Lottery”: Unfair Fate to the One Who Draws . (2021, Aug 03). Retrieved from https://studymoose.com/the-lottery-unfair-fate-to-the-one-who-draws-essay 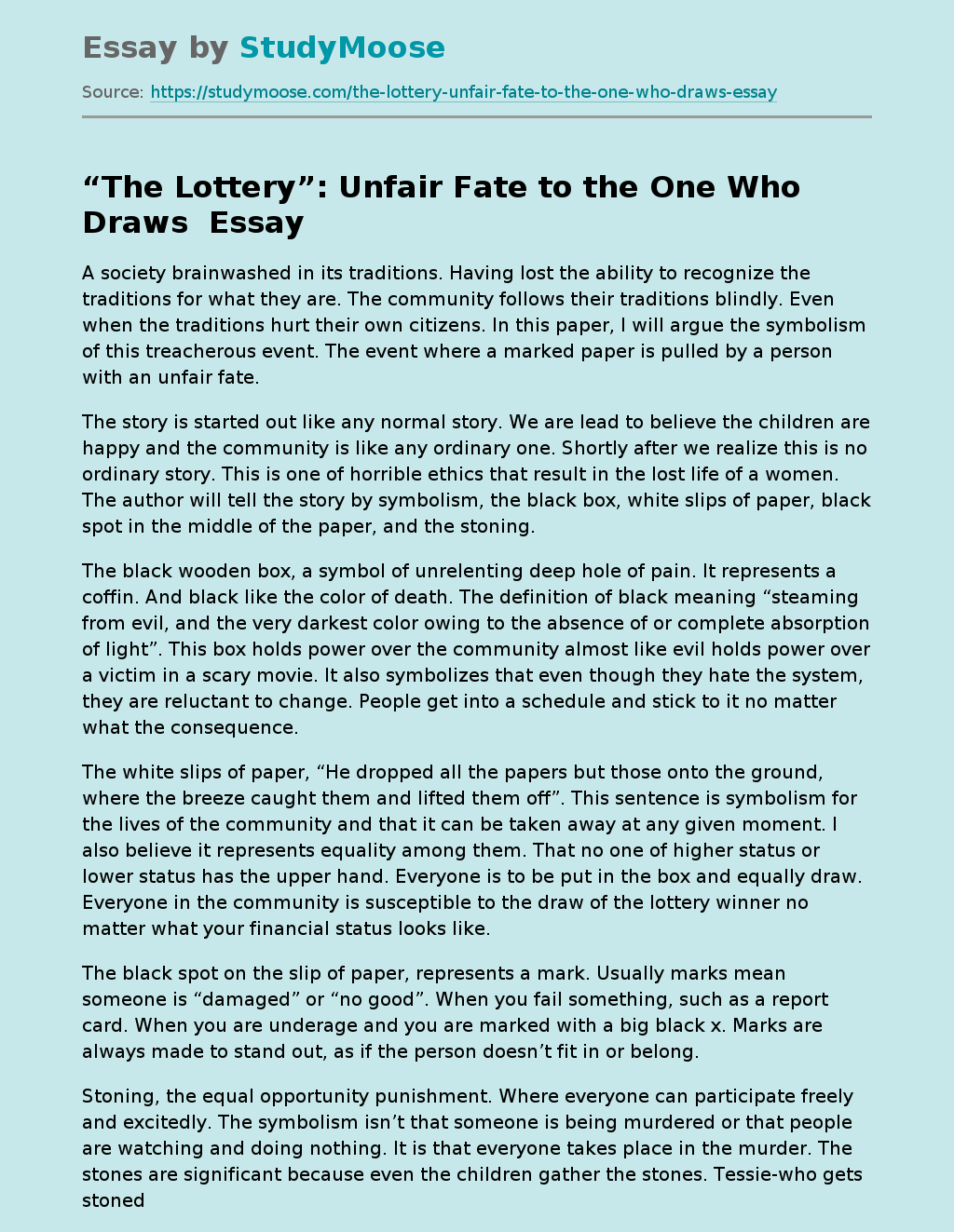