The Loneliness of the Long-Distance Runner

The Loneliness of the Long-Distance Runner, by Alan Sillitoe deals with an athlete facing conformity. Smith, Sillitoe’s character is a young “rebel,” who is in a borstal for stealing money from a neighborhood bakery. Smith is a long-distance runner, who runs every morning while in the borstal. The borstal governor keeps on top of Smith to keep running and win the “Borstal Blue Ribbon Prize Cup for Long Distance Cross-Country Running (All England).”

Throughout the story, Smith expresses his hate for the law, law-abiding citizens, and the law enforcements.

Don't use plagiarized sources. Get your custom essay on
“ The Loneliness of the Long-Distance Runner ”
Get custom paper
NEW! smart matching with writer

He constantly calls them “pigs,” “blokes,” or “pop-eyed potbellied”. He views life as a constant battle between the law and people like himself. He calls it a “battle of wits,” in which he must outwit the law. I think that it is this theory that helps Smith make his decision on whether to lose the race that he could easily win. To win the race would make Smith give in to the governor, and accept the values of all of the people he grew up to hate.

However, to lose the race, Smith would keep his independence and values.

Smith loses the race to win. He knows that he could easily win the race, but feels that he will be giving in. His only fear about losing the race is that no other runner will catch him before the finish line, and he would be forced to stand before the tape until someone passes him. I agree with Smith’s decision, and probably would have done the same thing.

He had his values and what he believed in, and did not want to give all of that up because someone told him to he has hated his entire life. Therefore, Smith was so determined to lose the race so that he could keep his values. In the long run, he was losing to win. Smith was going to be in the borstal for another six months regardless win or lose. Therefore, by losing the race, he kept his dignity and did not give in.

By Smith losing the race, he goes against what most athletes have. Almost every athlete is in a sport for the competition and to win. Smith did not care about losing the race, where most athletes would have won the race regardless. An athlete must compete to win the ultimate prize, like winning the World Series, the Super Bowl, the Stanley Cup, and so on. I do not think that Smith was a true athlete because he really never showed that he wanted to win, showed competitiveness, or wanted to be an athlete. Smith ran because he was able to get his mind straight, and it made him think clearer. Therefore, in general, I think that Smith went against most athletes’ mindset by losing the race.

However, there are a few athletes who do try to “buck the system,” like Smith. One example of this is Pete Rose. Pete Rose was an excellent baseball player, who had a gambling addiction. He possibly threw a few games that he and his team could have won, to cover the gambling spread. I do not sympathize with Rose for this because he was not like Smith. He lost to make money with a bookie, whereas, Smith lost the race to keep his values and beliefs. Pete Rose still had an excellent career and according to his numbers, should be in the Baseball Hall of Fame. However, since his faults are coming out years after he committed them, he is suffering and may not be allowed to be a part in one of the most prestige’s baseball honors.

Another athlete, who tried to “buck the system” was possibly Sammy Sosa. Last season, Sosa’s bat broke and it was noticed that his bat was corked, which makes his bat lighter and easier to swing. However, I do not think that Sosa meant to use the bat, I feel that there is no need for someone like Sosa to use a corked bat. Since the incident Sosa’s bats have been checked before every game to see if it is corked. It is extremely impossible to tell whether or not Sosa used corked bats when he broke the home run record, but the notion is still there. This can definitely hinder Sosa’s eligibility of getting into the Hall of Fame. Since he is still playing, we will not know if he succeeded in “bucking the system” until he is inducted into Baseball’s Hall of Fame.

The controversy of steroid use in professional sports is ongoing. No one really knows if athletes have used steroids to enhance their performance, but there is still controversy. People may say that athletes like Gary Shefield, Barry Bonds, Mark McGuire, Jason Giambi, and so on have used such steroids. Now that the controversy has arrived, many of these athletes have dramatically lost weight, and are not performing as well as they did. These are more cases where people are trying to “buck the system,” but we will never know if they have succeeded until tests are mandatory and the drug is in their system.

In conclusion, many athletes, like Smith have tried to “buck the system,” whether for personal good, or just overall performance. Smith lost his race to keep his values and goals, even though I do not agree with his values, I admire him for being able to face conformity, and stand up for what he believes. Athletes today do things for other reasons, which I do not admire, like gambling, or cheating. These athletes are being paid millions of dollars to play a game, and they feel the need that they need to cheat to win, which should not be accepted, especially for the youth of today. Smith lost the race to ultimately win in his heart.

The Loneliness of the Long-Distance Runner. (2016, Jul 03). Retrieved from https://studymoose.com/the-loneliness-of-the-long-distance-runner-essay 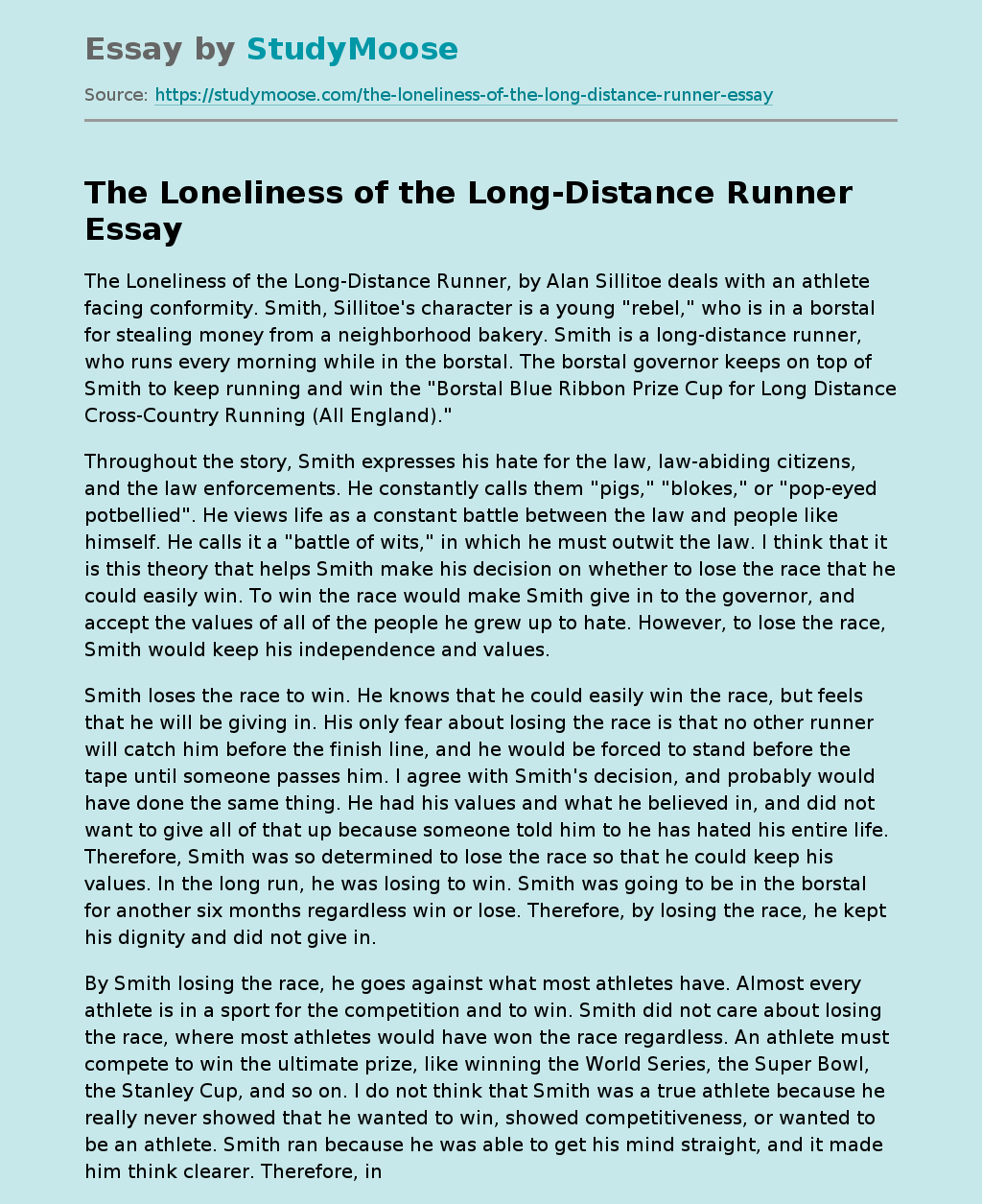