The Left Brain vs. The Right Brain

A question that has commonly been asked amongst this generation, are you a right brained thinker or left brained thinker? It has been more and more about in the past half a century for psychologists. Our daily actions and thoughts revolve around our brains and the obvious vital function it does for our bodies. You may be very shocked at the idea that this is only a theory amongst scientists and that our brains far surpass many so called suggestions on how it works.

Don't use plagiarized sources. Get your custom essay on
“ The Left Brain vs. The Right Brain ”
Get custom paper
NEW! smart matching with writer

Now the left brain is said to give us a completely different set of skills. Psychologists threw out ideas of our left brain taking responsibility of cordial function such as the way we speak, our mathematical skills, reasoning, and critical thinking. Left brained people under these terms would more likely be categorized among the genius level of our society. The ones who can solve Rubik’s cubes in under ten seconds or who can learn to read and write at the age of two.

As we know though, these people are not every one in five, turns out to be one in every  one hundred thousand.

However all of these things I just stated would seem to be true, but in fact they are all just myths. Psychologist Roger W. Speery who won the Nobel prize in the year 1981, came across a remarkable discovery “Our brains are made into two hemispheres, the left cerebral hemisphere and the right cerebral hemisphere, the wall that separates these two hemispheres is called the “Corpus Callosum”.[1] He was studying patients that suffered from the disease commonly known as Epilepsy. Dr. Speery found out that by cutting the corpus callosum it greatly reduced and sometimes eliminated seizures that patients with epilepsy have.

In turn his patients were facing detrimental effects after this procedure. It was discovered shortly afterwards that his patients had lost functions of their brains directly related to the theory of left brain dominance. For example, many split brained patients were unable name objects that were processed by the right side of the brain, but were able to name objects that were processed by the left side of the brain, based on this information, Speery suggested that language was controlled by the left side. In later years, and more research it has been proven that the brain works together as a whole as compared to two sides working separately.

Our brain is an extremely complex organ, only being able to use a maximum ten percent of our brains is also a myth. Eric Chudler, the director of  the center for Sensorimotor Neural Engineering at the University of Washington “When recordings are made from brain EEGs, or PET scans, or any type of brain scan there’s no part of the brain just sitting there unused.”[2] If it were true that we only used ten percent of our brains, we would be more dead than alive. Our brains function as a whole, is working together to control our speech, our language, our basic body controls, and the way we think. If part of the brain, whether it is the smallest part, were to be damaged or removed, it causes direct consequences to that function.

The human brain is actually a high maintained organ; it is required to have twenty percent of our bodies’ blood supply, which takes up a lot of our energy to keep it going. I’m sure you have heard the expression amongst those who try to think about too much at one time, my brain hurts! This myth has originated from people who claim to have psychic powers. Those people who claim to be using more brain activity claim that if we had psychic abilities such as telekinesis or mind reading, our brain power would go beyond this supposed ten percent.

This however has been intuitively denied by many top researchers today. Our brains hemispheres now learned to be working together, instead of separately, control our whole body. It is a constantly working organ, and is used all the way up. It is made up of millions of working parts that separate it into two working halves that function as one whole. Scientist still support the ideas of left  and right brain hemispherical thinkers, however these two portions must function together to support each other to make us as human beings function properly.

The Left Brain vs. The Right Brain. (2016, May 07). Retrieved from https://studymoose.com/the-left-brain-vs-the-right-brain-essay 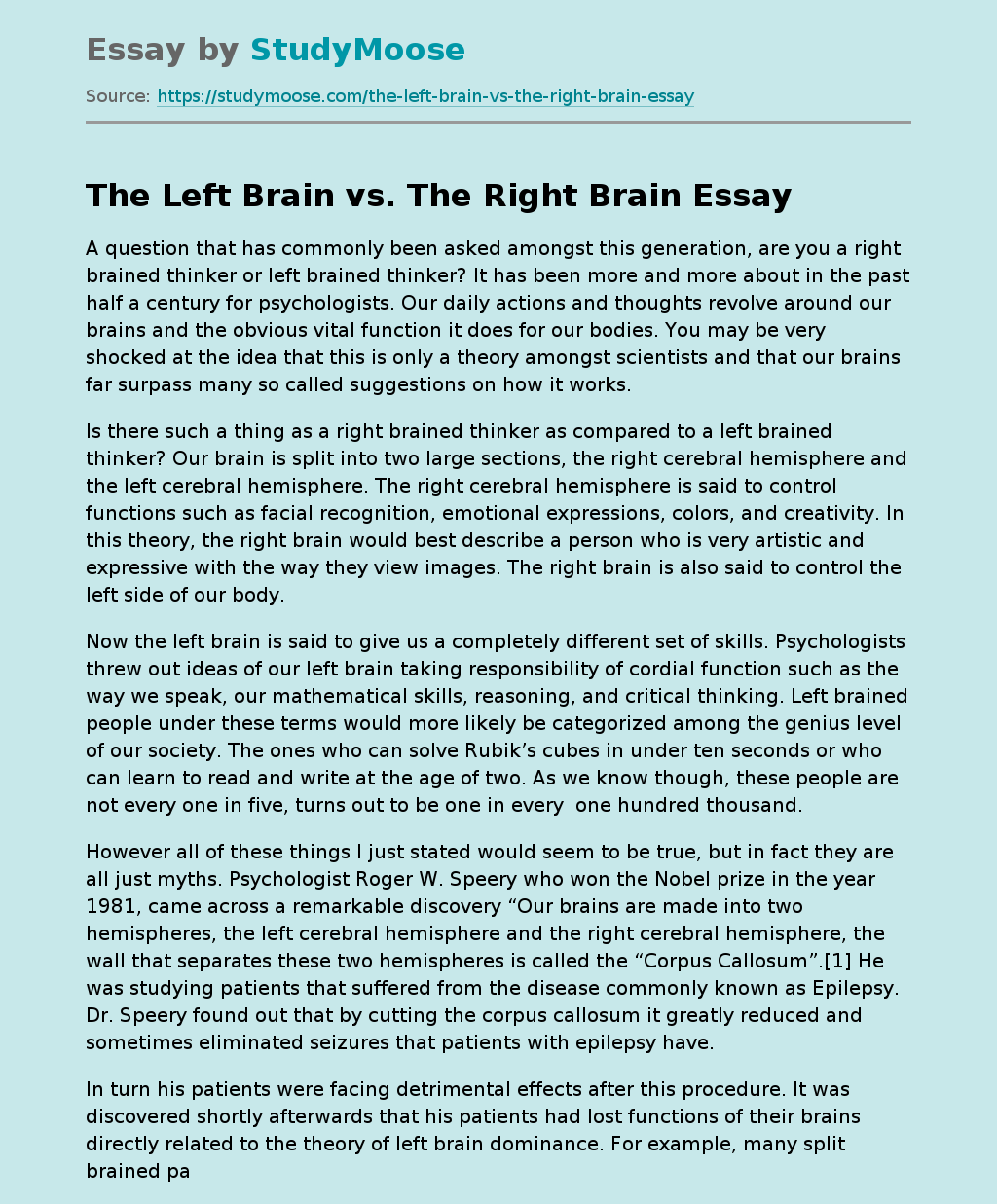