The Islamic State and Religious Extremism

In recent years there have been a serious rise of religious extremism, radicalization and increased conflict from Non State individuals. The tactics of lawlessness and the spread of extremist hate and fear by these Non State individuals have built up and the methods of propagandistic instigating and fear mongering have also expand as a consequence. Groups like ISIS-ISIL-DAESH have capitalized on recent technological advancements to spread their base and reach out to a wider audience regarding their ability to access and use Chemical, Biological, Radiological and Nuclear (CBRN) material for malicious purposes.

Don't use plagiarized sources. Get your custom essay on
“ The Islamic State and Religious Extremism ”
Get custom paper
NEW! smart matching with writer

Proficient in: Extremism And Its Disadvantages

Nerve agent rockets may also still be available in Iraq. In July 2014, the (IAEA) International Atomic Energy Agency revealed that uniformed personnel linked to ISIS-ISIL-Daesh apprehended low-grade nuclear material from Mosul University following the conquered the city in northeastern Iraq. In addition its expansion into Libya, ISIS-ISIL-Daesh may have access to chemical materials from previous programs.

The Islamic State has demonstrated a willingness to use any means to maximize the harm and disruption it inflicts upon its enemies. Starting in 2014, these means came to include chemical weapons, which were utilized in possibly over 37 attacks in Syria and Iraq, causing a handful of confirmed deaths and a limited number of injuries.

In the course of its operations, ISIS-ISIL-Daesh has utilized two basic classes of agents: weaponized toxic industrial chemicals (TICs) and warfare agents. The use of weaponized toxic industrial chemicals (TICs), has dominated by the use of chlorine, illustrated by ISIS-ISIL-Daesh’s willingness, and capacity to effectively prepared resources that came into its hands, which also clearly demonstrated that the group had no remorse about adopting chemical weapons. Chlorine was deployed frequently between August 2014 and June 2015 but slowed to a minor stage after. In total, there were at least 20 strongly instances of the use of chlorine by ISIS-ISIL-Daesh. In addition, there are indications that ISIS-ISIL-Daesh forces may have used chlorine grenades and other small-scale delivery methods extensively in the course of their defense the Iraqi capital of Mosul and other sites in north-central Iraq, although these attacks have not been recorded in detail. A feature of these deployments is that they all occurred in Iraq. In January 2004, Abu Musab al-Zarqawi, the Jordanian-born leader of jihadist insurgents in Iraq, wrote a letter to Osama bin Laden.

Dismissing Americans as ‘the most cowardly of creatures, ‘ who would leave the country soon enough, Zarqawi turned to the apparently ‘insurmountable obstacle, ‘ the Shiite majority in Iraq, ‘the lurking snake, the crafty and malicious scorpion, the spying enemy, and the penetrating venom.’ With al Qaeda’s official endorsement and financial support, Zarqawi promised a campaign that would destabilize Iraq, awaken Sunnis and annihilate Shiite apostates. To those who claimed that the Islamic nation was not ready for a bloody battle, Zarqawi had a ready reply: ‘This is exactly what we want The Islamic State also known as ISIS, -ISIL- Daesh egressed from the left overs of al Qaeda in Iraq (AQI), a local outgrowth of al Qaeda founded by Abu Musab al Zarqawi in 2004. The leader was eliminated several years after the surge of U.S. Military forces in 2007. But it began to develop in 2011. Over the next few years, it took advantage of growing weakness in Iraq and Syria to carry out attacks and growth support among its ranks. The group changed its name to the Islamic State of Iraq and Syria (ISIS) in 2013. ISIS launched an offensive on Mosul and Tikrit in June 2014. On 29 June 2014 ISIS the fearless leader Abu Bakr al Baghdadi made public his new vision of a caliphate during a mass gathering ceremony in the city of Mosul extending from Aleppo in Syria to Diyala, Iraq, and proclaimed the new Islamic state..

The U.S led a coalition that began airstrikes against ISIS in Iraq on August 7, 2014, and expanded the campaign to Syria the following months. On October 15, the United States changed the military campaign to (OIR) Operation Inherent Resolve. During the following months, the United States carry out more than 8, 000 strategic airstrikes in Iraq and Syria. During this time ISIS did lose territorial ground along Syria’s border with Turkey, and by the end of 2015, Iraqi forces had successfully gain great progress in Ramadi. But in Syria, ISIS made ground coverages on the border of Aleppo, and still firmly withheld their presence in and around Raqqa and surroundings. By December 2017, the ISIS caliphate had lost 95 percent of its territory, including its two biggest and strategic strongpoints, Mosul, Iraq’s second largest city, and the northern Syrian city of Raqqa, its nominal capital. The Iraqi rincipal Minister Haider al Abadi announced victorious over the Islamic State in Iraq on December 9, 2017. But ISIS was still influencing and carrying out attacks all over the world, including the United States and Europe.

The Islamic State and Religious Extremism. (2020, May 24). Retrieved from https://studymoose.com/the-islamic-state-and-religious-extremism-essay 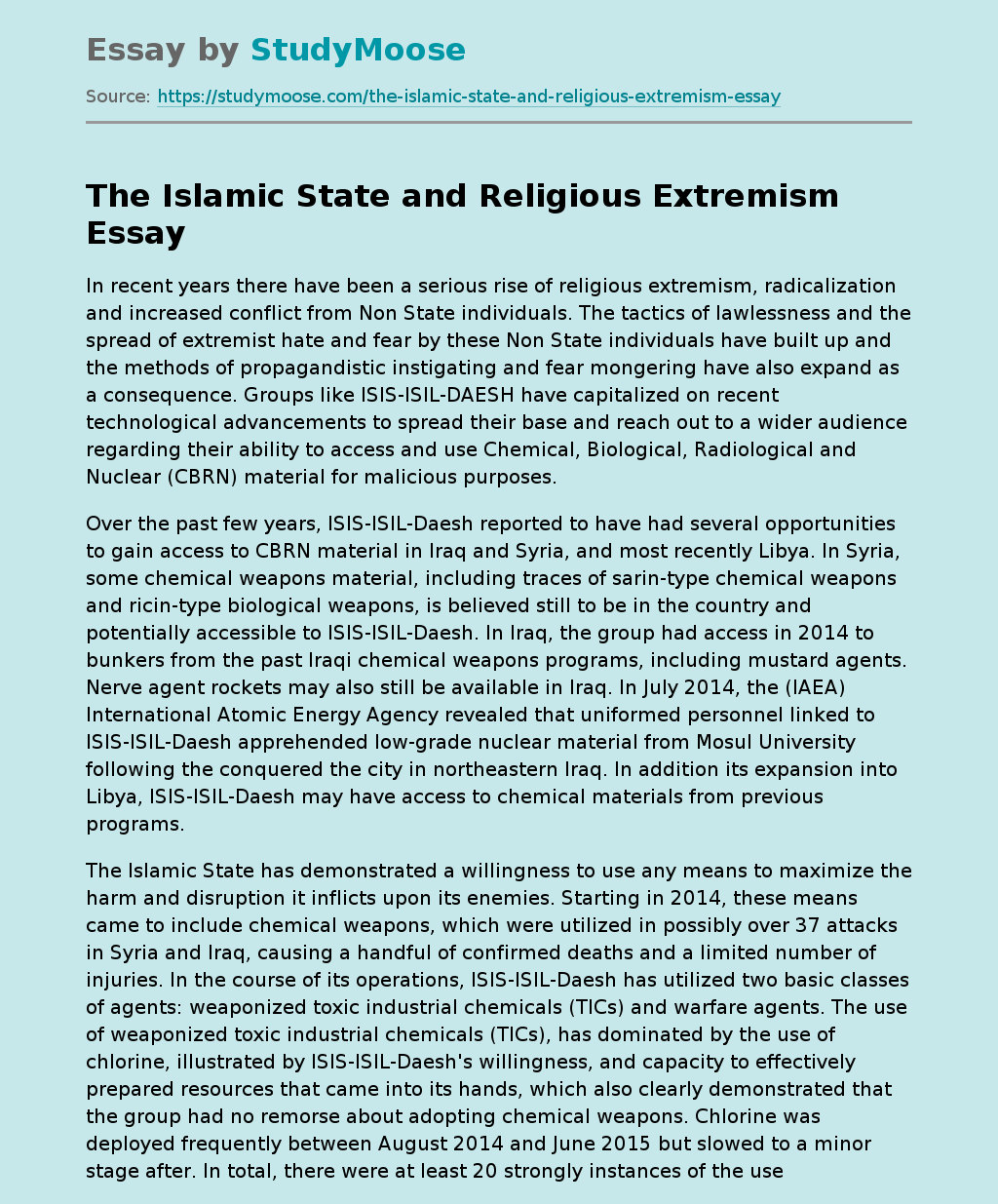