The Moral Education Between Public School And An Islamic Boarding School

This article describes the moral education between public school and an Islamic boarding school. Actually, Applying moral education in this era is not easy the teacher must make a rule or educate their students to keep the behaviour in every place. The people have to realize about education in our country because moral education is the character of students as their identities. It is Not about the best school in the world that have moral value, but about the principle of morality that they are given.

Don't use plagiarized sources. Get your custom essay on
“ The Moral Education Between Public School And An Islamic Boarding School ”
Get custom paper
NEW! smart matching with writer

And the fact, religious education is possible have all package to offer the students to keep their character and identities. Not only intellectual education but also moral education can they get.

Nowadays, we encounter a lot, especially in excellent schools. They feel proud and superior not because of their character, mentality, and morality, but only to the extent that the culture is taken from the West.

Confess quality because it uses a foreign language. It even hopes to be distinguished from other schools because it is more international.

These model schools have been trapped in prestige. Efforts to align themselves by forgetting the identity and meaning of education itself. Coupled with the perception of a society that has been influenced by consumerism and materials that requires their children to be able to compete on this side. The community demands that the school provide a future for children to have adequate life. Religious and moral issues can be secondary.

If we only glance at education in Japan, education can not only apply and develop knowledge but also still be given their character education and cultural knowledge. So they still love and also understand their origin with the culture of their ancestors. Because education does not only prioritize intellectual intelligence but also moral, spiritual and emotional intelligence.

The public should be aware, that the education system in our country tends to only prepare students for entry into the next level and then college or only for those who do have talent at academic potential (a measure of high IQ). Just look at the weight of subjects directed at developing the academic dimensions of students which are often only measured by the ability of logic-mathematics and abstraction (language skills, memorization, abstraction or IQ measures). Though there are many other potentials that need to be developed because based on Howard Gardner’s theory of multiple intelligences, the academic potential is only part of the other potential.

The word morals come from Arabic which according to language means character, temperament, behaviour, or character. If in everyday language morals are related to courtesy manners, decency, and behaviour. In Greek, morals are called ethics or ethos, meaning that there are habits, inner feelings or the inclination of the heart to do something.

Moral education is very necessary and needed in this day and age. Because good culture comes from human beings who are loaded with good morals. Moral education is expected to help the nation’s problems, especially young people. Armed with morals, someone will know and be able to sort and choose good and bad deeds. Putting things in their place and in effect humanizing humans with noble relationships.

Moral Intelligence Factor of each individual improves every development. Individual moral development is divided into four main domains, namely punishment, behaviour, feelings, and personality. According to Piaget and Kohlberg (Santrock, 2007: 132), the moral development of this class is called by the role of parents and school. Research conducted by Walker, Hennig, and Krettenauer (In Santrock, 2007: 133) shows parents and peers can contribute to the moral maturity of children if children can obtain opinions and check to allow them. In the view of Ross Thompson (in Santrock, 2007), children are moral holders, struggles to obtain what is moral. People can help in this struggle with sensitive guidance from adults at home who give lessons about morality in everyday life. Some important aspects of parent and child relationships that contribute to children’s moral development improve the quality of relationships, discipline from parents, proactive strategies, and conversational dialogue. A. According to Thompson (in Santrock, 2007: 133), the quality of the relationship between parents and children in terms of introducing children to reciprocal relationships in terms of close interpersonal relationships is an important basis for positive moral growth in children. In this connection Intelligence that is the ability to perform task-directed, critical thinking, and overcomes the environment effectively. It can be concluded that intelligence is an intellectual potential that requires a rational notion process. Therefore, intelligence cannot be accessed directly, it should be eliminated from more than a few concrete actions that are manifestations of the rational thought process.

The Prophet Muhammad SAW chosen man whose morality is praised by Allah: And indeed you are truly noble and noble. (Surat al-Qalam: 4), as well as humans sent to educate human morals as the sound of the hadith narrated by Bukhari: Surely I was sent to perfect (educate) human morals.

School is a place to study, interact, socialize, and behave by implementing the rules that have been made. Here, it is home to the students who are expected to become a role figure in the future. There are various aspects desired in terms of education that students want, including language lessons, numbers, skills, hobbies and so forth. However, on the other hand, the teacher becomes a parent to educate according to the norms of the rules. Moral, courtesy, and immoral education is applied to foster a sense of consciousness as a human being.

However, in the progress of this age, the behaviour of a student is truly empowered. Even if it because of association outside the school, or school management is lacking in delivering. Basically, the behaviour of a student to the teacher must be full of respect and obedience. But now, the teacher at school is treated the same as a friend, whose sense of courtesy is no longer there. this might also be considered very reasonable by teachers in public schools, maybe their approach to students should be done like that way. In contrast to education in Islamic boarding schools where politeness to the clerics is the key to the knowledge inherent in the students themselves. Thus, the teacher’s role should really be applied properly in educating students to become better.

Islamic boarding school is an Islamic educational institution that was first established in Indonesia and has a very important role in preparing the nation’s generation in terms of education and study of religious sciences. The birth of the Islamic boarding school did not escape the history of the entry of Islam in the archipelago. In the modern era like today, the Salaf Islamic boarding school is faced with rapid changes in social and technological systems. Today’s society has experienced many changes in values ​​in its social life as well as a modern society with its characteristics as a comparison of traditional society. However, during civilization changes that occur within the community, there is still a boarding school that does not fully participate.

Several things exist in the Salaf Islamic boarding school, including; First, the learning system used is the classical method. The learning system was taken from Middle Eastern countries (Arabian Peninsula, Egypt, Palestine, and parts of the African Continent). Second, the management system of Islamic boarding school that is, there is no organizational system and all kinds of regulations in it are centred on the Kyai, as well as the teaching and learning process, for example, the methods applied, the books taught, and the time of their implementation are Kyai’s decisions. Third, technology, which is up to the present era, boarding schools are distancing themselves from technologies such as radio and television, even though the device has quite good benefits, but there are also negative impacts.

Islamic boarding schools must take steps to adjust to reforms that can benefit their students, as well as support the sustainability of Islamic boarding schools, such as the establishment of a planned, clear and orderly curriculum. According to Zamakhsyari Dhofier in his book The Pesantren Tradition there are five elements that must be present in boarding schools, including the boarding house as a place that is useful as a hostel (residence) for students; mosque as a place used for worship; the teaching of the yellow books (classical) which is a study of classical Islamic books written by the great scholars at that time; students who are students who live in boarding schools; and the clerics as caregivers as well as teachers for the students.

In a modern era like this, the existence of the Salaf Islamic boarding school is a question for some parties about its relevance to be maintained. In this era, a lot of progress in science and technology is happening and has had a positive or negative influence on human life. The positive influence is that it is a very effective means of supporting learning to be used as a tool in the learning process. And the negative influence is felt more by the students and the community, namely by the emergence of various kinds of moral/moral damage. Therefore, when compared to public schools, Islamic boarding schools have advantages in an education system that is more moral/moral. Until this modern era, Islamic boarding schools still exist and are growing more rapidly and will still be needed in the future because they can provide good mental and spiritual guidance. However, the system must also be adjusted to the times.

However, they must also be able to combine the law of the Salaf with the current conditions. In this way, the mindset of the boarding school residents will be more critical and dynamic. Thus, they can make wise decisions when responding to new problems in this modern era, can filter out the good or bad cultures, and go according to the current development of the times without having to get out of the shari’ah taught in Islamic boarding schools.

So, the development of Islamic boarding schools must be carried out without having to change the original form of the Islamic Boarding School. If the boarding school rejects the existence of advances in science and technology, it will be alienated and may even be unable to contribute to the lives of surrounding communities.

From the description that has been stated, it can be concluded that moral education in schools is important to do by teachers and all the component of school citizens in order the comprehensive moral education will be achieved.

The Moral Education Between Public School And An Islamic Boarding School. (2021, Feb 24). Retrieved from https://studymoose.com/the-moral-education-between-public-school-and-an-islamic-boarding-school-essay 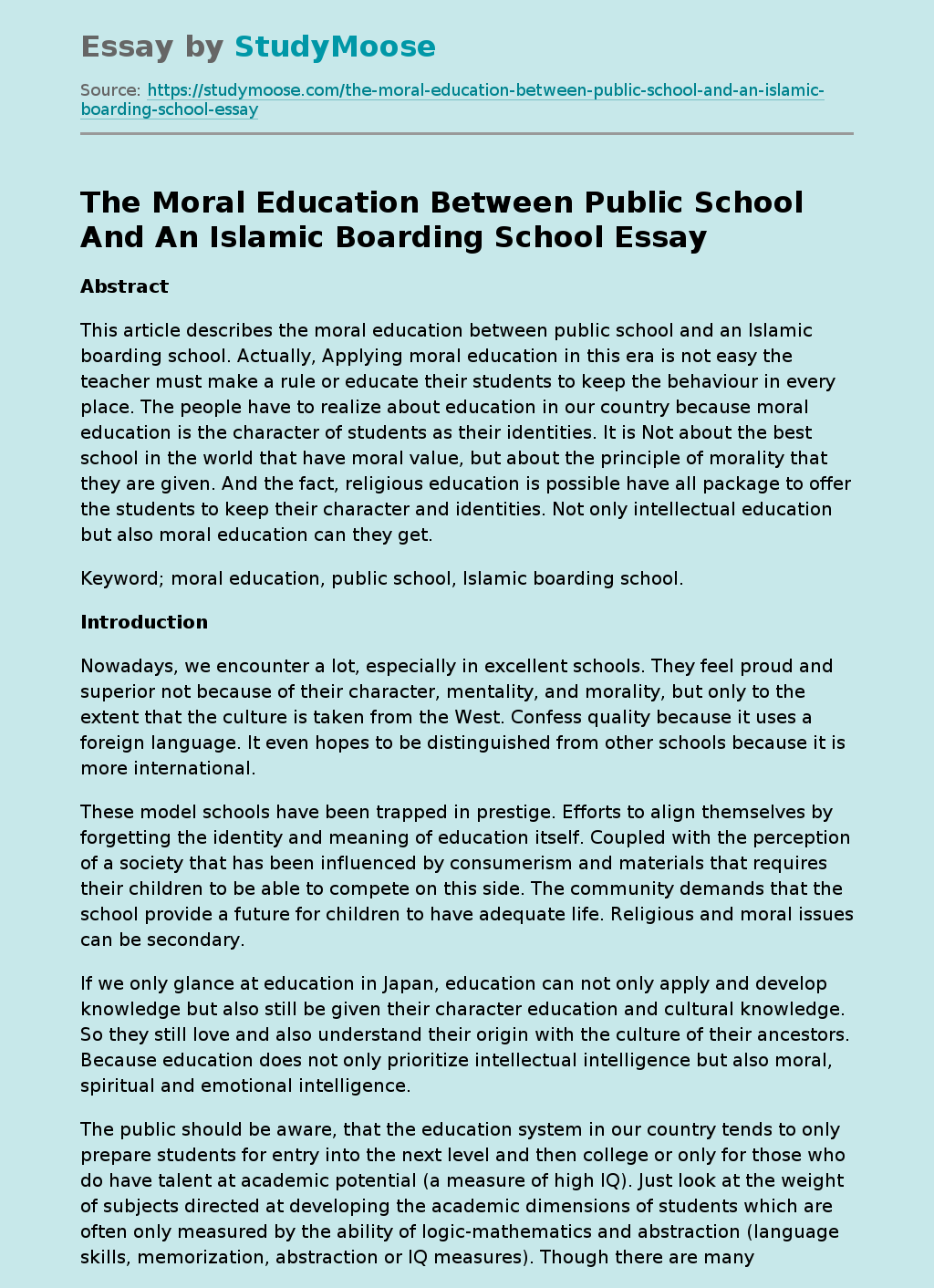