Abstract. The goal of this research is to determine the insecticidal effects of chili pepper leaf extract on termites. Chili pepper leaves were collected then air-dried and oven-dried until brittle. The leaves were then pulverized and milled using the Willey mill. After this, the powdered leaves were boiled in water and filtered. After the preparation of the extract, termites were gathered in two containers. One of the containers was sprayed with the extract. The other container served as the control. The setup was checked every hour for five succeeding hours.

Don't use plagiarized sources.
Get Your Custom Essay on The Insecticidal Potential of Chili Pepper Just from $13,9/Page

Result showed that the extract had no apparent effect on termites.

The chili pepper, or suing labuyo as many of us know it, is a favorite spice of many people around the world, including the Philippines. There are people who cannot eat anything without the taste of real hot pepper. Pepper have health-sustaining properties as well. They have been found to have rich Vitamin A and C contents. Here in the Philippines, even the leaves of the chili pepper are eaten as a vegetable.

The goal of this project is to find out if an aqueous extract from chili pepper leaves have any insecticidal effect on insects, specifically termites.

Termites are a common problem everywhere. They cause destruction in furniture, houses, or anything made of wood. If this research proves to be successful, there can now be an alternative solution to this problem and it is also possible that it can be used in the fight against other insect pest. This research will only test the leaves of the chili pepper for insecticidal properties. Only one concentration of the solution will be used for testing. The chemical contents of the extract will not be determined. The extract will only be tested on termites.

Some of the older insecticides come from minerals and plants. Many of these contain the mineral arsenic. Insecticides that come from plants are nicotine, made from tobacco plants; rotenone, made from certain tropical plants; and pyrethrum, made from chrysanthemum flowers. These have generally been replaced by organic insecticides. The newer insecticides are made in the laboratories. There are three basic types – the phosphates, such as Malathion, the carbamates, such as carbaryl; and the chlorinated hydrocarbons, the most famous of which is DDT (dichlorodiphenyl – trichloro – ethane). Insecticides are absorbed by the insects in different ways. The insect may have body contact with an insecticide. The insect may feed on treated foliage or fruit. It may absorb vaporized insecticide through its breathing system.

Or it may feed on the sap of plants that absorbed the insecticide. Usually, insects are killed by a combination of these methods. Insecticides kill by affecting the physiology of the insect. For example, borax is used to kill roaches. It abrades the skin of the insects (roughens the skin or wears it away), causing them to lose water. They die by drying. DDT and many other insecticides cause death by interfering with nerve transmissions. Others react with the nervous system in such a way that they cause the pest to stop feeding and thus starve to death. Insecticides are helpful, but they also can be dangerous. Some insecticides, called broad-spectrum poisons, kill a wide variety of organisms. Besides killing pests, they kill harmless and helpful organ¬isms, including wasps, spiders, and other natural enemies of pests.

Some insecticides, like DDT, remain in soil and water for a long time, harming wildlife. DDT is no longer sold in the United States. Sometimes insects become resistant to an insecticide. That is, the insecticides no longer kill them. Resistance can be avoided by careful use of insecticides. This means controlling the amount and the kinds that are used. It also means spraying limited areas or spraying only certain plants in an area. Insecticides used in the home may pose harm to people if their fumes are inhaled or if ‘there occurs skin contact. Some contain poisons that affect people and pests. These should not be used if young children or pets are likely to touch or chew on the objects with the insecticides.

It is extremely important to read and follow the directions or warnings that come with any insecticide. It is also important for anyone who uses an insecticide to understand its purpose and properties.

The garden vegetables pepper, Capsicum annuurn, of the Solanaceae, or nightshade family, is grown throughout the world and produces not only the green, bell-shaped, sweet peppers that are common garden varieties, but also the hot peppers used for such spices as paprika, chili, and cayenne. Most cultivated peppers belong to one of two major groups. The Grossum group yields the globose, mild-flavored sweet-peppers and the pimiento, or Spanish pepper. The Longgum group produces the “hot chili” and cayenne peppers, several hundred varieties of which are cultivated in wanner regions. Longum peppers are characterized by their extreme pungency. They may be highly irritating when eaten fresh, and in western cuisines they are generally used for the most part in the form of spice powders made from the dried fruit. Paprika is obtained from a milder variety of hot pepper.

Termites (order Isoptera) are mainly tropical and subtropical insects, comprising nearly 1,800 species in about 200 genera. Common to warm and humid climates, they are also fotmd in North America and southern Europe. Termites were believed to have evolved from relatives of the cockroach, but recent studies of DNA taken from termites and cockroaches seem to show they both evolved from a common ancestor. The life cycle, habits, and appearance of termites are similar to those of ants, so that termites are also referred to as “white ants”.

But the insects differ in a number of important aspects. Although termites can also be agricultural pests, they are known primarily for their destruction of wooden structures. A common method of termite control has entailed the use of chlordane. In 1987, however, with recent studies showing that this pesticide can cause cancer, the United States Environmental Protection Agency banned almost all its uses, including aboveground antitermite applications; it may only be injected into the ground beneath homes.

The chemical hexaflumuron has been found to inhibit the production of chitin for the termite’s outershell, preventing it from molting. This chemi¬cal is being tested for safety and proper use in termite control around houses.

PREPARATION OF THE EXTRACT SOLUTION

Twenty termites were gathered from the mound near Advanced Technology Building (A.T. B.). They were then placed into two containers, divided evenly.

TESTING OF THE EXTRACT ON TERMITES

Ten termites were put into each of the two containers made from the fine screen. Afterwards, 5 millilitres .of the extract was sprayed on one of the containers leaving the other one to serve as control. The number of dead termites was checked every hour for five hours.

Initial results showed that there was no apparent effect of chili pepper leaf extracts sprayed on the termites. During the first hour of the observation period, the researchers observed the death of a termite in the experimental group. During the four succeeding hours, no further death was observed. The group suspected that the extract had a very minimal or no effect on the termites. The concentra¬tion of the extract must have been too dilute to show any insecticidal property. (1 gram of chili pepper leaf powder is to 50 milliliters of water)

Based on the data observed, the group concluded that the chili pepper leaf extract has no effect on termites. No death occurred during the testing period.

The group did not have their expected results and arrived at a certain conclusion that Chili pepper leaf extract is not good as an insecticide for termites. The group recommends to future researchers to use a variation of the concentration, preferably of a higher concentration of the chili pepper leaf extracts for testing. If it proves to be effective, the group recommends to use the extract on different insects for its possible effect.

Mindscape. Grolier Electronic Publishing, Inc,. Singapore. 1996. The New Book of Kpowledge. United States of America. GRolier Incorporated. 19)80. Note: No part of this article maybe used or reproduced in any form whatsoever without wtritten permission from Philippine Science High School, Diliman Quezorr City except in the case of brief citation embodied in scientific articles and reviews.

The Insecticidal Potential of Chili Pepper. (2016, Nov 22). Retrieved from https://studymoose.com/the-insecticidal-potential-of-chili-pepper-essay 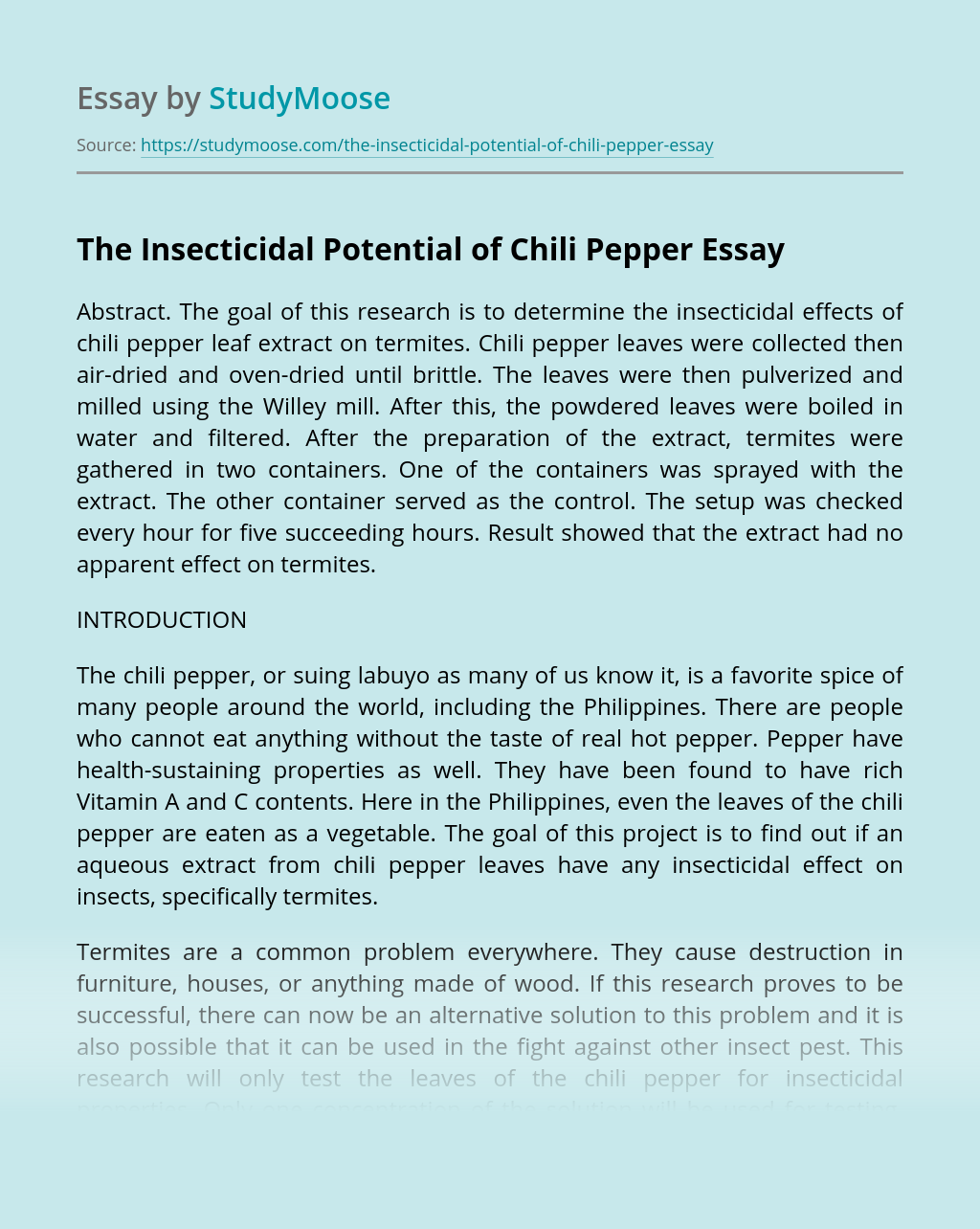