The importance of theraputic relationship between client and therapist Essay

The following essay comprises of basic counselling skills pertaining to the significance of the therapeutic relationship between the client and the therapist. The effectiveness of basic counselling will be reviewed as indicated by empirical literature. The ethical considerations in psychotherapy with regard to the therapist client relationship will also be included. The therapeutic relationship is considered to be the most essential component in facilitating the successful resolution of a client’s presenting problems (Beutler, 1995). It can be defined as the relationship between client and therapist.

Don't use plagiarized sources.
Get Your Custom Essay on The importance of theraputic relationship between client and therapist Just from $13,9/Page

According to Beutler, (1995) the therapeutic relationship is the foundation of psychotherapy. This relationship enables the therapist to induce and maintain the use and adjustments of treatments to ensure the client’s expectations are met (Beutler, 1995). The importance of selecting a therapist is crucial as it results in a therapist that works effectively with a client and reduces factors that may impede progress (Beutler 1995).

The focus is on the client and the therapist attempts to apply all learned techniques and skills to gain effective understanding of the situation and guide the client to make their own choices which promote their overall well-being (Beutler, 1995).

The acknowledgement of the nature of relationship variables enable the therapist to establish a therapeutive perspective on what treatments to be used for a successful outcome (Beutler, 1995). Systematic eclectic psychotherapy (s.e.p) is a psychosocial intervention that collaborates theories, techniques and therapeutic practices from a variety of schools and emphasizes the bond between the therapist and client (Beutler, 1995). This approach defines three ways to promote the development of a therapeutic relationship (Beutler, 1995). The first way is therapist patient-matching which enables the client to seek a therapist that is easy for the client to communicate with but must have a different perspective to enhance the client’s view of their situation (Nelson- Jones, 2003).

According to Beutler (1995) there are two dimensions for patient matching which include demographic similarity and dominant wish that one seeks to fulfill by engaging in interpersonal relationships. Secondly, role induction refers to the conveyance of attitudes that ensures the client has realistic expectations of their progress (Beutler, 1995). It also prepares the client to assume a productive and collaborate role with the therapist in therapy which is a technique referred to as therapeutic contracting (Beutler, 1995). The last way is in- therapy environmental management which is a technique developed to ensure a productive treatment relationship during therapy (Beutler, 1995). The therapist uses this technique to accommodate the expectations and attitudes of the client instead of changing it.The therapist aids in overcoming personal difficulties and working towards a positive change (Brammer, 1993). Basic counselling is an interactive relationship that exists between a client and a professional counselor known as a therapist (Nelson-Jones, 2003).

The therapist is trained to use conceptual models and basic counselling skills (Nelson-Jones, 2003). The basic counselling skills include communication skills such as active listening, clarification, reflection and effective questioning skills (Nelson-Jones, 2003). These skills and techniques are applied to the specific problems presented by the client. Counselling is therefore aimed at helping the client to solve their problem with the appropriate skills gained (Brammer, 1993). The matching method used to ensure a strong therapeutic relationship is essential in enabling an effective relationship during counselling (Beutler, 1995). Theorists argue that the client and therapist must have a mutual understanding for progress to be beneficial in a particular counselling environment. Numerous empirical studies done report that the client variable accounts for about 40% of therapeutic change, as clients are more committed to working within a therapeutic relationship they are comfortable in (Bond, 1996). The therapeutic relationship has effectiveness as a primary level of therapy as it contributes a unique piece of variance to the effectiveness of therapy during the counselling process (Bond, 1996).

Thus, according to these theorists, the therapeutic relationship has secondary level, preventative effects in therapy as a factor that is involved in client’s beliefs and feelings about the effectiveness of therapy as well as maintenance of the therapy (Beutler,1995). Counselling is a helping approach that highlights the emotional and intellectual experience of a client (Brammer,1993). Effective counselling reduces confusion and enables the client to make effective decisions leading to positive changes in their behavior or attitude (Nelson-Jones, 2003). Effective counselling in not telling the client what to do but rather enabling the client to make their own choices and reach their own decision and act upon it accordingly (Nelson-Jones, 2003). According to Tjeltveit (1999) some of the main ethical considerations with regard to the therapist client relationship is competence, informed consent, relationships with vulnerable individuals and a general concern for ethical practice.

This is a legal and ethical concept which professionals are obligated to provide relevant information to clients such as their area of expertise and methods of therapy (Tjeltveit, 1999). The client should be aware of intended treatment and progress during the therapeutic relationship, such choice of techniques, realistic outcome and the methods used. All information discussed during the counselling sessions are regarded as confidential unless subpoenaed by the court or indicated by the client to be disclosed to a particular individual (Tjeltveit,1999). The alternatives of certain procedures should also be provided to avoid unrealistic expectations (Bond, 1996). Also, ensuring clients are knowledgeable about therapy, supports their capacity to engage in informed consent, which protects their rights. Tjeltveit (1999) suggests that therapists need to provide clients with information about its ethical dimensions, including possible value conflicts between therapists and clients in a manner and extent that is appropriate to the particular therapeutic relationship.

It is unlikely that ethical deliberation will result in obvious choices of right and wrong. The nature of dilemmas relating to sexual abuse, suicide, and breaches of confidentiality require carefully reasoned consideration, which can stand up to scrutiny (Wiener, 2001). Wiener (2001) agrees that ethics inform our codes of practice which place great stress on the moral importance of respecting our client’s right to confidentiality. He emphasises its link to the relationship of trust which is so crucial to the therapist’s work, and suggests that ethical dilemmas are most likely to occur when conflicts of values are experienced (Wiener, 2001). According to Bond (1996) non-moral value choices tend to relate to the well-being of the person making the choice, while moral choices are linked to the well-being of the community or society as a whole. An ethical foundation needs to provide a basis to support the process of identifying and considering ethical issues, from a variety of perspective (Wiener, 2001). In conclusion the determinant of the therapeutic relationship is how well the client and therapist are able to communicate and connect, if successful results in effective psychotherapy.

According to the literature reviewed, basic counselling skills also depend on the established foundation of the therapeutic relationship. Once established the therapist is able to understand the client, the appropriate communication and treatment frameworks can be implemented. Ethical consideration in psychotherapy pertain to issues of confidentiality, informed consent, competence and general acceptable ethical behaviour. It can be concluded that the therapeutic relationship and connection between therapist and client is the basis of basic counselling.

The importance of theraputic relationship between client and therapist. (2016, Apr 18). Retrieved from https://studymoose.com/the-importance-of-theraputic-relationship-between-client-and-therapist-essay 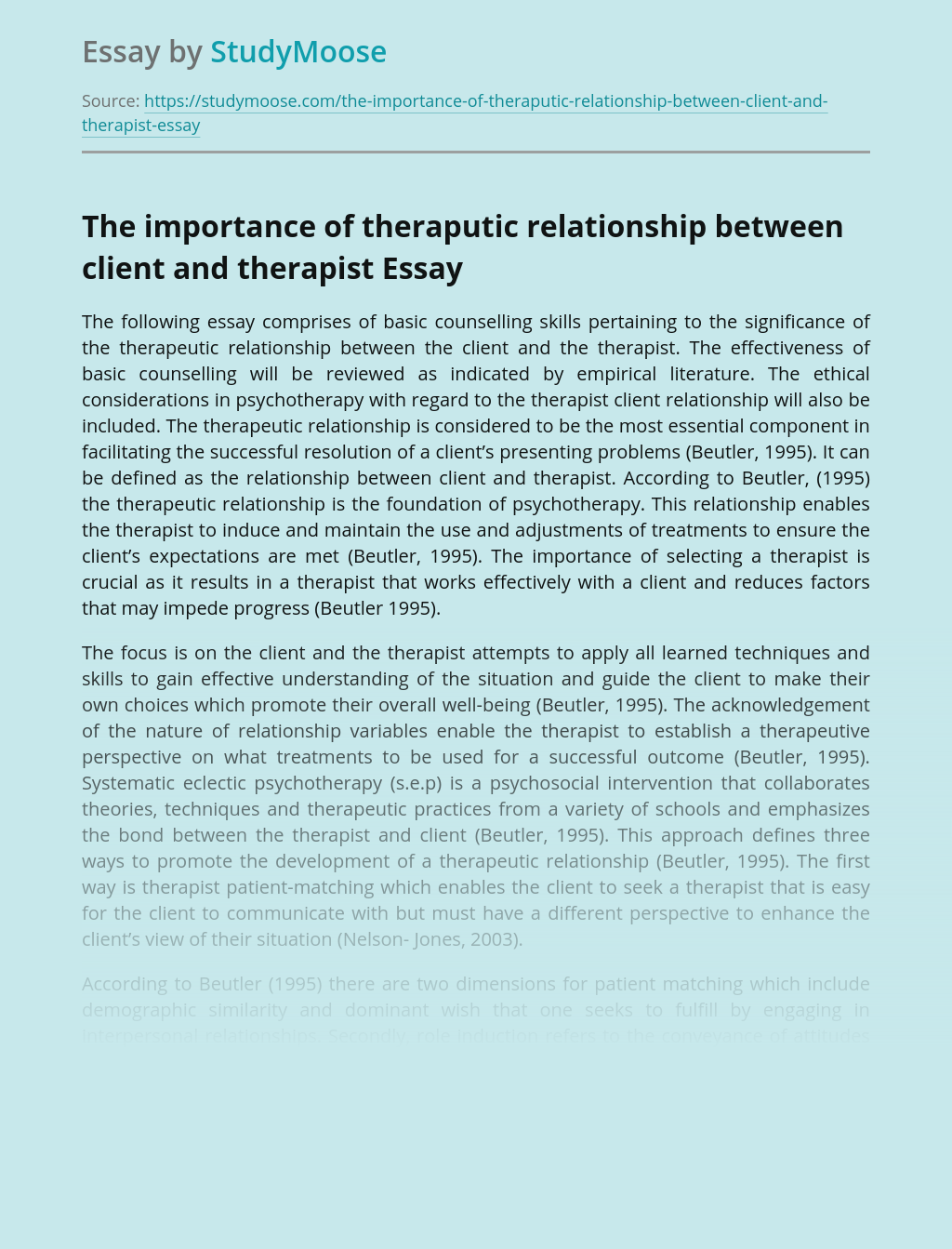 Themes in "The Beauty Queen of Leenane"

Maureen and Mag are isolated because of their physical location and their relationship with each other. Maureen dreams of being free of her mother’s house and small town life in Leenane. She blames her mother and her sisters for her circumstances; however, she is faced with the hard truth that men don’t come to call.... VIEW ESSAY

View sample
Get Essay
The Scarlet Ibis by James Hurst

Gaining from the ameliorate of ones disability, makes a person seem self-centered or conceited. The Scarlet Ibis, a short story by James Hurst tells the story of two brothers. Brother tells the story of his actions that contribute to his younger brothers death. Brothers pride is the main reason for Doodles yearly passing. This idea... VIEW ESSAY

Positive Effects of Corporal Punishment Corporal punishment in regards to spanking has been used for hundreds of years in educational systems and in house holds and is still legal in all fifty states for parents to use in there household because it is an effective way to punish a child for wrong behavior. Even though... VIEW ESSAY

In today’s society people face some form or type of dilemma and it could either be a personal, ethical, or moral dilemma. As individual’s we encounter personal dilemmas, whether it is professional or educational and with these dilemmas there is always some type of choice that must be made and with this choice there is... VIEW ESSAY