To have courage is to do what you want without the care of what others will think. By that standard Earnest Hemingway is a very courageous man. During a time when abortion was such an unspoken taboo, Hemingway threw caution to the wind and wrote “Hills Like White Elephants”, a story about an American man and his girlfriend, Jig. The couple is at a train station in Europe on their way to Madrid to get Jig an abortion. Symbolism plays an important role in “Hills Like White Elephants”.

Don't use plagiarized sources. Get your custom essay on
“ The Importance of Symbolism in “Hills Like White Elephants” ”
Get custom paper
NEW! smart matching with writer

Three main forms of symbolism is shown through Jig’s name, the reference to white elephants, and the bamboo beaded curtain in the train station.Symbolism can be obviously stated or it can be slightly more subtle. The name of the woman, Jig, is a symbol all in itself. In the book Jig says “I wanted to try this new drink. That’s all we do, isn’t it–look at things and try new drinks?” (Hemingway ) Her name reflects on this because a jig is also a form of measurement of alcohol.

What is also interesting about their names that the man is simply referred to as “an American” and only Jig is given a name, this leads the readers to create the characters into whomever we would like, and by the symbolism in the name Jig, we are able to conclude that is couple is used to being carefree and they like to part and “try new drinks”. The largest form of symbolism throughout this entire story is the symbolism involved with the White Elephants.

The element of white elephants is symbolic of the baby. A white elephant is a precious item that has a cost which perhaps surpasses its usefulness. The White Elephant symbolizes different things for both the man and Jig. For the man the White elephant represents something that is more of a burden, though it is a blessing, it is still unwanted. “They look like white elephants,” she said. “I’ve never seen one,” the man drank his beer’ (Hemingway ) This exchange of words indicates that he is not open to considering the possibility of keeping the child and wants the girl to have the abortion operation. For Jig this represents more of the precious aspect of the unborn child.

The bamboo curtain is also used as a symbol that is used to symbolize the issues that this couple has due to this possibility of a new life. This is because Jig wants the baby and the man doesn’t, therefore pregnancy acts as a curtain between them. The story describes this curtain by stating, “Close against the side of the station there was the warm shadow of the building and a curtain, made of strings of bamboo beads, hung across the open door into the bar, to keep out flies.” (Hemingway ) The curtain between the couple seems to become more and more of a problem because “the girls wants the baby, not the abortion, what she says will make no difference in their relationship and which hypocritically he persists in assuring her he does not want if she objects to it” (Weeks).One of my favorite quotes is actually one of Hemingway’s, “Writing is easy, you simply need to sit at a typewriter, and bleed.” To me this quote means that you need to be fearless in your writing a write about what you want, without having to worry about repercussions or what others will think about what you are writing about.

That is exactly was Hemingway did with this story, by writing about an abortion in a time when abortion was such a taboo. I think that Hemingway accomplished creating a more open mind in the average being, with the use of his symbolism. He never actually uses the word abortion, and he does not give an opinion as to whether or not abortion is good. He simply uses all of his symbolism to almost give a life to this unborn child, while also conveying the thought that all decisions are difficult ones, and not all decisions are made with all of the influences of the decision being fully on board with what is thought.

Hemingway is intentionally very vague in his writing and this gives further meaning to the story by giving it the title “Hills Like White Elephants” which needs to be interpreted and thought about by the reader, therefore adding more depth to the story merely with the title. Hemingway leaves us with an open ending, but the symbolism throughout the story leaves us with just enough information so that we are able to draw our own conclusions. The symbolism shown through Jig’s name, the reference to white elephants, and the bamboo beaded curtain in the train station really helps to give meaning and direction to a story that would otherwise be bland and confusing. “Hills Like White Elephants” is not “raisin bread” as Hemingway would put it, It features Hemingway’s clean, plain-style prose; his “iceberg principle” of omitting detail and forcing the reader to decode the story. (Flanders)

The Importance of Symbolism in "Hills Like White Elephants". (2017, Jan 08). Retrieved from https://studymoose.com/the-importance-of-symbolism-in-hills-like-white-elephants-essay?post 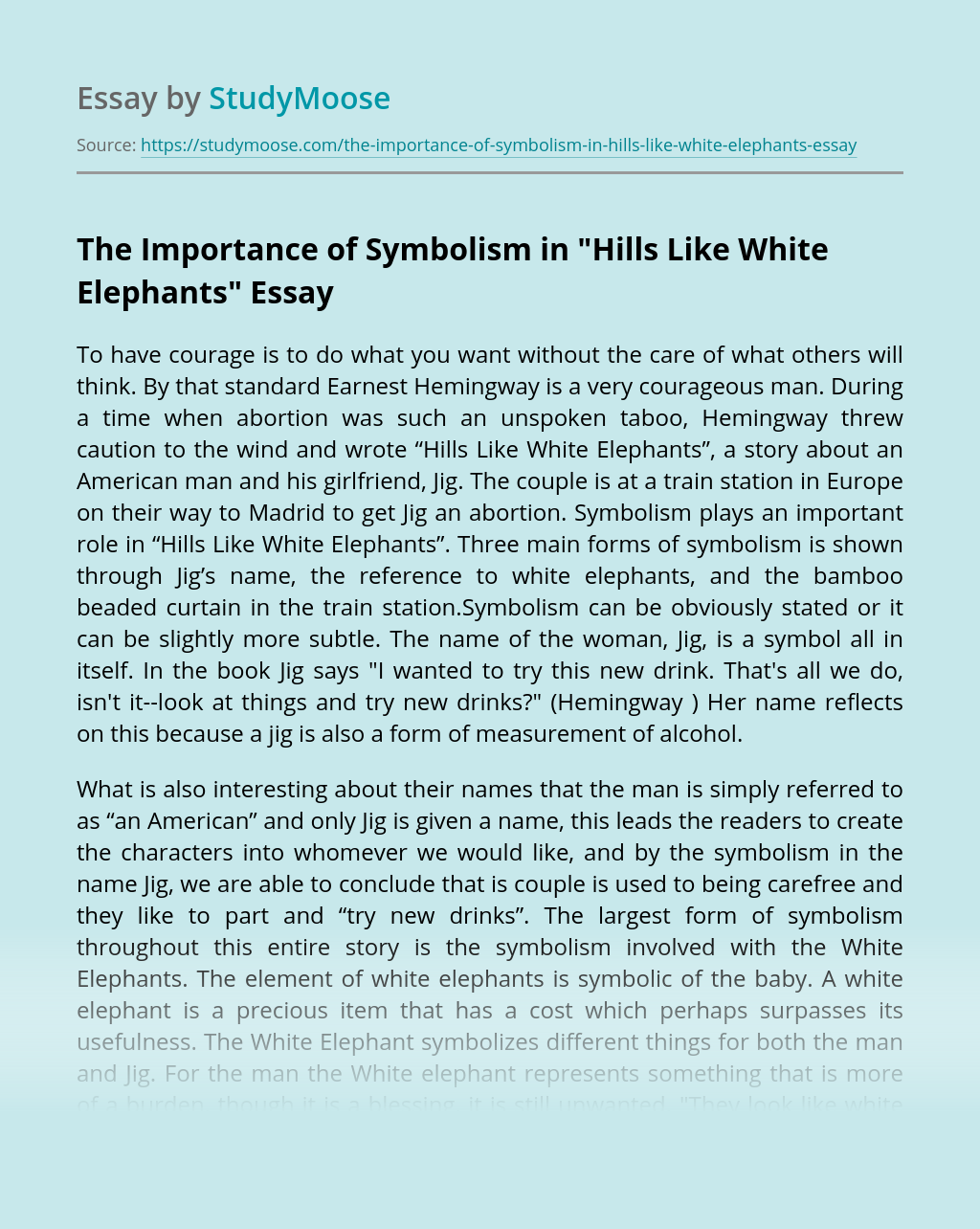