The Importance of Accountability in the Army

What does it mean to be accountable?

Why accountability matters in the army?

How can people who do not show up affect the accountability formation?

+84 relevant experts are online
Hire writer
Don't use plagiarized sources. Get your custom essay on
“ The Importance of Accountability in the Army ”
Get custom paper
NEW! smart matching with writer

Why my chain of command has accountability is because it is easier for them to track down other soldiers in case they were needed for anything.

Being accountable means being dependable, showing up to formation at the appointed time, being at the right place and at the right time and doing the right thing at the right time all while in the correct uniform provided covered in Article 670-1. It is also to see if everyone shows up to formation and or where they are supposed to be. Accountability is not only for keeping track of other soldiers it can also be for keeping track of money, gear, legal documents, and many other things.

Losing sensible items is a valuable part of accountability because our unit’s leaders need to know who was maintaining responsibility for particular respectable item(s), (NVG’s, ACH’s Eye Pro, Ear Pro, Gloves) so on and so forth. If someone in the formation doesn’t have a certain item, it can be acknowledged by the soldier’s Squad and or team leader, so it can be brought up to higher attention so someone who may have an extra set or pair may help the solider in need.

Losing sensible items can be very dangerous, especially in a deployment environment where as anything can happen at any given moment. A soldier who doesn’t have eye pro is putting his/her eyesight at risk. A solider without proper ACH equipment is putting his/herself at risk of getting trauma to one’s head.

Being late is better than not showing up to the appointed place at the appointed time. A soldier that was late may have had an incident that required him/her to run a little late. If so, contact your team or squad leader and inform them why you would be late to formation. A little heads up goes a long way.

The reason you would want to keep track of soldier is so if there is ever a time where a lot of soldiers goes missing you would be able to look in specific place rather than looking in unnecessary places. You can also make a log book so whenever anyone goes somewhere they would have to sign out of that log book. Also, the buddy system is a good way to find out where someone would be. The whole reason for having accountability is so we get to where we are going on time, so we stay safe and if we were to get into trouble someone could come get us.

It is also helpful to have a cell phone or a phone pad with your chain of command in it so you can always be reached. When we’re accountable it makes my chain of command job easier and mines as well, doing what I need to do to be accountable in always a plus because being early doesn’t mean that I am early but being late is being (FTR) failure to report and unaccounted for. If our chain of command always conducts a hundred percent accountability they will never have any problems like wondering where someone is or wondering why someone is missing.

Discipline is vital in accountability because if we maintain our discipline as a professional soldier we will always be accountable unless told to do otherwise. Without discipline soldiers, the military and the government will be ruined because discipline means the observance of certain well-defined rules like reporting to my place of duty on time. Without such regulation it is not possible to maintain proper accountability because such regulations contribute to the United States military.

Orders comes from top ranks down to the lower ranks and article 90 of the Uniform Military Code of Justice states that, willfully disobeying a lawful command from our superiors or any commissioned officer is unacceptable, because following orders is one of the regulations set forth to instill discipline within the ranks.

Following orders ensures that everyone is on the same page to get the task done in the most efficient manner possible. If we do not follow the orders given to us, the risk of failure increases and we put ourselves in the position of not completing the mission handed down.

While we may have been able to question the reason of obedience in our daily life, this luxury is not available to us in the united states military where the goals require smooth internal functioning.

Not following orders is not an optional choice while living the standards of the United States military. If we don’t follow orders while in a combat zone this makes us combat ineffective and if we’re combat ineffective this unit, it slows down the progress of winning and also breaks our leader’s concentration on the task in hand and directs their attention towards us. If we execute the order quickly and to standard, that tremendously helps with the effectiveness of the unit, even if they don’t know it because every single soldier is vital to winning the fight.

If we’re able to follow orders and execute them effectively and to standard that will possibly strengthen the unit and increase the moral of the unit by making it to where the leadership doesn’t have to worry about (if I am going to do that right or not), this relieves tension from the leaders and other members in the unit because then the work is evenly spread out and everyone works like a team to get the job done quickly and to standard, being disciplined is to follow orders without questioning our leader’s judgement.

The Importance of Accountability in the Army. (2021, Jun 02). Retrieved from https://studymoose.com/the-importance-of-accountabili-21357-new-essay 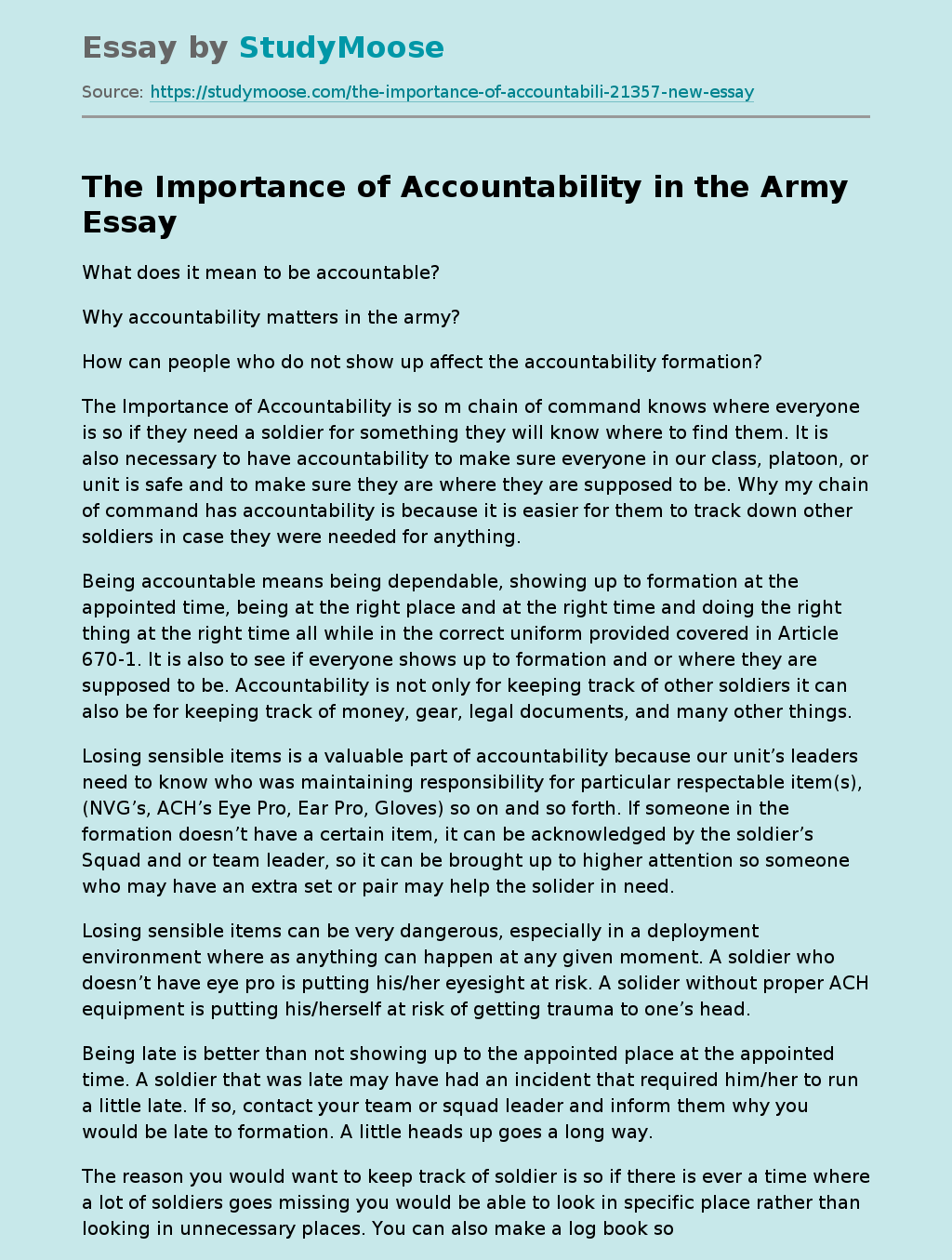