In the late 19th century, Russia began its process of industrialization following its defeat at the hands of Western nations in the Crimean War. Russia’s Industrial Revolution was further helped along by its growing population and an increasing labor force. As the industrial process continued, it sprang forth new jobs in mining, factory work, and railroad construction.

This influx of jobs was taken by an influx of people, come from the country to work in the cities as cheap laborers, taking up dangerous, low-paying jobs.

Don't use plagiarized sources.
Get Your Custom Essay on The Impact of Industrialization on Russia (1750-1914) Just from $13,9/Page

In spite of all these changing times and circumstances, the tension between the upper and lower classes remained taut as a drum, building up under the fabric of society. Industrialization in Russia had an enormous, lasting impact that set Russia on the course for the troubles that would happen in the future.

The 1750 to 1914 period in Russia was met by a large increase in the available labor force. Coupled with an increase in population, Russia’s emancipation of the serfs freed many of Russia’s serfdom from perpetual slavery.

However, the emancipation process was planned so as to put the freed serfs deeply in debt to the original owners of the land. In fact, many of the serfs were so deeply indebted that they relocated to Russia’s cities in search of better work opportunities. When combined with the already growing population, the urban labor force swelled greatly. As a result of industrialization and the availability of labor, many job openings were provided to the urban labor force. Factories needed workers and maintenance, with huge amounts of factory-produced goods being produced and processed. Another source of jobs was in the mining industry.

The mining industry bloomed after the Russia’s industrial boom, with many raw materials needed by the factories in order to facilitate production. The mining (for materials like iron and coal) process was very dangerous, and many workers died working in the mines. Also, men were needed for the building of Russia’s extensive railroad network, the Trans-Siberian Railroad. This increased employment helped Russia’s economy rise from the agriculture-dominated economy of pre-industrialization to a wealthier, more well-rounded economy.

During the era of the serfs, the serfs worked for no pay, while their landlords became exceedingly rich off the serf’s labor. However, even after the emancipation of the serfs, the lower classes were still preyed upon by the upper classes. In factories, workers would soon observe the same patterns.

The workers lived and died in virtual bankruptcy, while the men on the higher tiers of the workplace management structure would get rich off of the workers’ hard labor. After this, the workers began pushing for reform to try and change the unfair stratification of the company income. This continued tension between the upper and lower classes were one of the major, if not the major factor that spurred the chain of revolutions and revolts that occurred in Russia in the early 20th century.

Industrialization did have a huge impact on both Russia as a nation and as a people. In the era of Russian revolutions, the upper vs. lower class struggle is really one of the main points surrounding the cause for rebellion. With the industrialization came the labor workers, and for the laborers, jobs were created. Industrialization helped make Russia a strong, independent nation, and set it on its way to find its government. 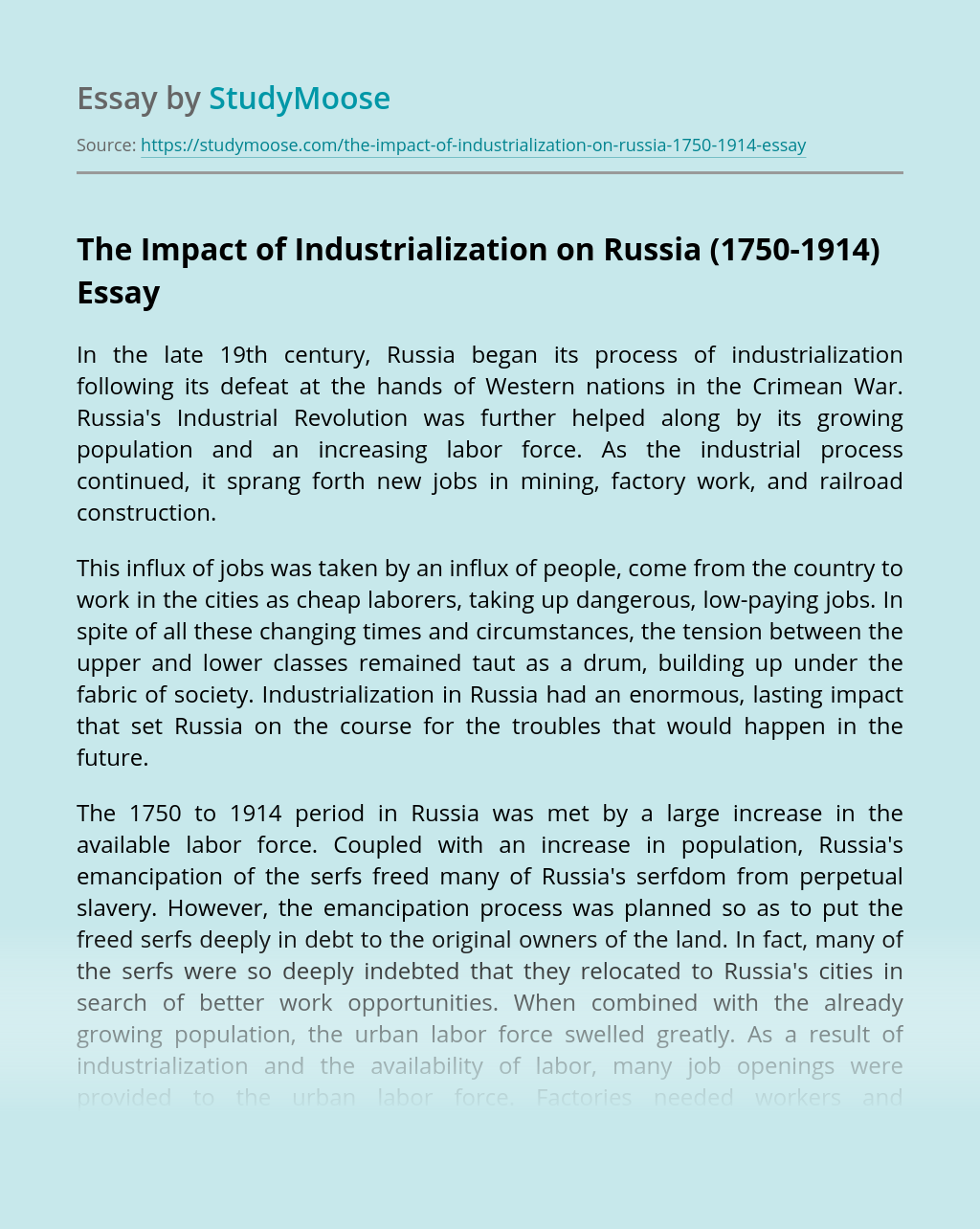 Depression and Suicide in Late Adulthood

Reaching late adulthood is a stage in life that individuals often hope to be able to reach. Life starts from the moment of conception and goes on until we all reach the unavoidable stage of death. Individuals all deal with life in many different ways. An adult that has gone through life completing most of...

Question 2: A range of authors (e.g. Gerard and Ellinor 2001; Isaacs 1993, 1999; Schein 1993; Senge 1995) suggest that dialogue can positively transform organizational cultures. Do you agree with this assessment? Why? Why not? Engage with relevant academic literature in developing your argument. Student Name: Nguyen Vu Hoang Dung Student Number: 11477445 In organization...

The protagonists of Houseboy, by Ferdinand Oyono, and One Day in the Life of Ivan Denisovich, by Aleksandr Solzhenitsyn, as well as their comrades or friends, live servile lives and are constantly under the command of a controlling power. In Houseboy, the character, Toundi, is under the colonial authority of the French in Cameroon, while...