The History of Softball

The history of softball all starts in Chicago on Thanksgiving Day 1887. A group of about twenty guys gathered in a gymnasium to hear the score of the Harvard vs. Yale football game. After the guys heard that Yale had won the game one of them picked up an old boxing glove and threw it at someone who hit it with a pole. One of the guys in the room was George Hancock, (later to be known as the inventor of softball), shouted, “Let’s play ball!” You might think they would try to play with some kind of larger baseball right; well George took a old boxing glove off the floor and tied it up with string then used that as a softball.

Turn in your highest-quality paper
Get a qualified writer to help you with
“ The History of Softball ”
Get high-quality paper
NEW! AI matching with writers

The same goes for a bat they used a piece of a broken broomstick. Well he thought what’s softball without a chalked diamond lines on the floor, so he made them but in a smaller version. That’s how softball started.

While Chicago was no doubt the city were softball was created, Minneapolis was the city that actually modified the game. The first women’s softball team was formed in 1895 at Chicago’s very own west division high school. The team did not have a coach for competitive play until 1899. The Spalding Indoor Baseball Guide 1904 issue fueled the progress of sport by devoting a large portion of the guide to women’s softball. In 1933 the Chicago National Tournament also advanced the sport of softball. At this competition, male and female champions were equally recognized.

Eleven years later women’s softball players were given the closest amount to Major League Baseball, with the 1976 formation of the International Women’s Professional softball League, (WPSL).Now a days the league is also called the (NPF) National Pro Fastpitch. The players made about $1,000 to about $3,000 but since the league had financial difficulties it shut down in 1980. But the league got back together on Nov. 21, 2001. The popularity of women’s softball has grown steadily since the leagues end in 1980. In fact, once again, there is another professional fast pitch league. When softball was invented by George Hancock, he set up or created a specific set of rules for this new sport. The basic rules were: 1) There were 9 players on a softball team.

2) the playing field was divided into t6he infield and the outfield 3) the lines between the bases are 60’ feet apart and when joined they form a “diamond”, inside the baseline 4) Outside the baseline but inside the playing field is called the outfield. 5) Any ball going outside the 1st base or 3rd baseline is a foul ball(runner as cannot advanced and the batter gets another try unless the ball is caught in the air). 6) An official game is 7 innings (a inning is when both teams have their turn to bat). Those were his six rules specifically designed for sport.

George Hancock also set up positions like baseball were the infield and the outfield would play. The infield positions were called; the pitcher, catcher, 1st base men, 2nd base men, short stop, and 3rd base men. The outfield positions are; right field, center field and left field. There are only nine players on the field at a time. The defense would be fielding and the offensive team would be up to bat. The history of softball has changed over time from when it was fist played with an old boxing glove and broken broom into and fast moving sport with gloves and high tech bats that just keep better each year. The leagues have changed and the rules modified all in all the sport has evolved into a fun loving pass time America has come the know and love thank you George Hancock for creating such a great sport.

The History of Softball. (2016, Nov 09). Retrieved from http://studymoose.com/the-history-of-softball-essay 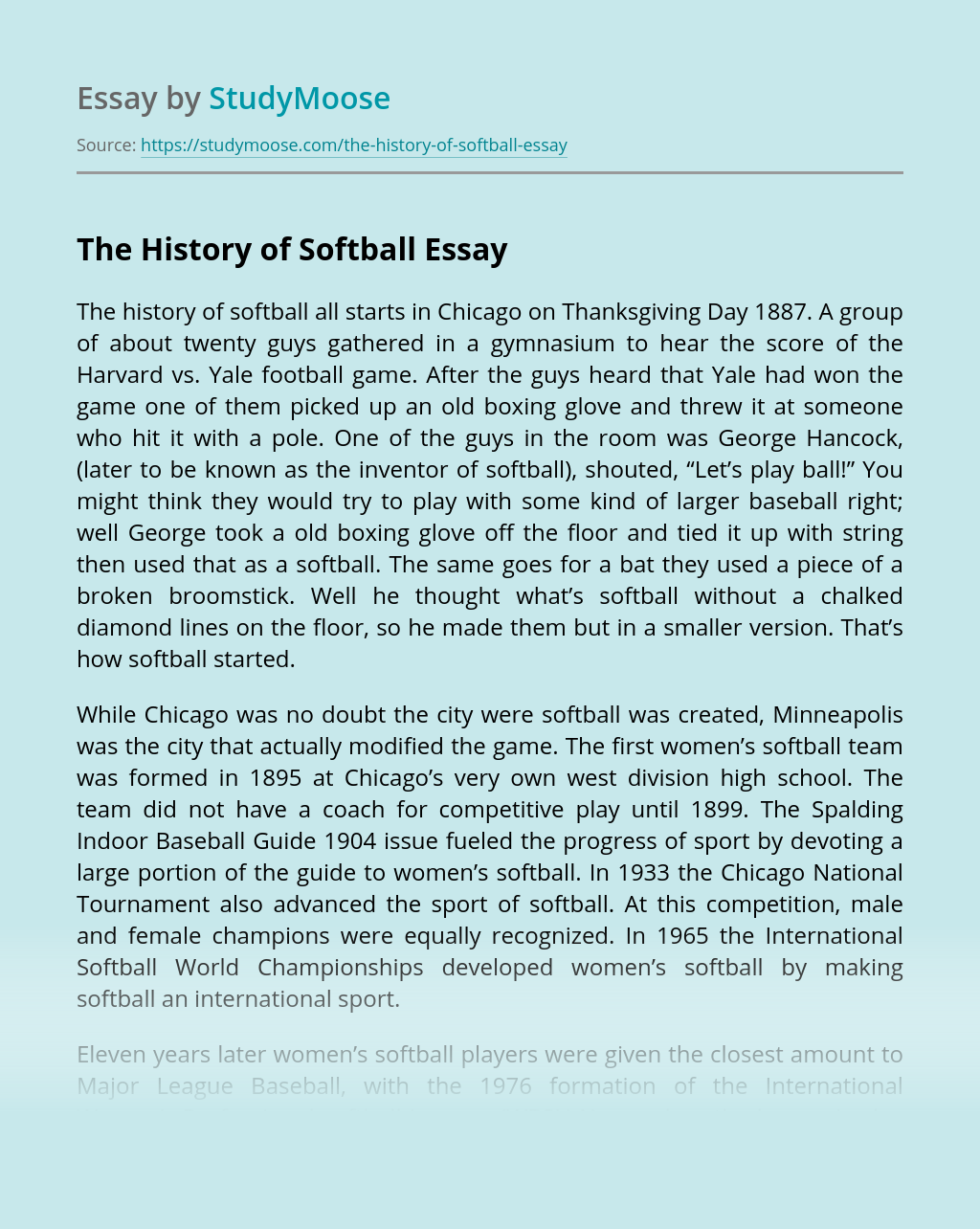 Turn in your highest-quality paper
Get a qualified writer to help you with
“ The History of Softball ”
Get high-quality paper
Helping students since 2015
Stay Safe, Stay Original