Francis Scott Fitzgerald, writer of lost generation portrays the 1920s as the period of downfall of social and moral values. The Great Gatsby, one of the American’s masterpiece books, was published in 1925 a time of great immorality, exactly captured the period’s moods and styles. It is the first book which captures the wild and carefree time period. Gatsby’s quest for his past love is the main theme of this novel.

Circling this object, the writer highlights many useful topics of the 1920’s society and satirizes the social condition of that time.

Don't use plagiarized sources. Get your custom essay on
“ The Great Gatsby by Francis Scott Fitzgerald ”
Get custom paper
NEW! smart matching with writer

The story is told from first person point of view, which gives the story a realistic feature. Each character of this novel comes from different economic backgrounds and represents the differences of social class.

My paper is arguing that society or social condition is responsible for the characters’ downfall in this novel instead of extra-marital or illicit love relationship.

In The Great Gatsby, Fitzgerald using the novel’s characters and setting, portrays the social condition of the 1920’s American society with the representation of social classes and wealth that was the main object during the roaring 1920’s. Fitzgerald mentioned 1920s as the Roaring Twenties, the Boom, and the Jazz Age.

The writer draws the picture of 1920’s as the age of self-centered, loss of morality, depends on money.

This era’s great achievement was prosper and economic growth. “Fitzgerald is a product of his times; it’s not his fault; he’s not responsible but language/discursive net works/social institutions are” (Elizabeth Preston. 156).

The society of Fitzgerald’s time was full of immorality, materialistic, class conflict, exhaustible greed. Young Americans spent money to impress each other of society and relationship or marriage was based on money or social class. ‘Money’ was everyone’s desired and used illegal way to be rich overnight which is the symbol of immorality.

Fitzgerald presents that the elite group of society consists of two types: ‘established rich’ and ‘new rich’. ‘Established rich’ gained wealth from their old generation. They have rare work except business reasons and spend money and time for enjoyment. They pursues lower class people for their own purpose. On the other hand, ‘Old rich’ community thinks that ‘new rich’ belongs low background in society, they are not like them and works for living. Here the class conflict is seen.

Fitzgerald’s criticizes the practices of social class during The Jazz Age using the setting of the novel and the characters. Writer typically generates a connection between the social class and the setting of the novel, for illustration The Valley of Ashes is “a desolate area of land” (Fitzgerald. 21) and “a solemn dumping ground” (Fitzgerald. 21) which is situated in the middle of West Egg and New York.

The Valley of Ashes is popular for the lives of poor people. West Egg is well known for the existence of ambitious community whom are ‘less fashionable’ (Fitzgerald. 7) and East Egg represents the upper class community. In Fitzgerald’s time society was continued based on the social class which is reflected in The Great Gatsby.

In my opnion, each bad incident in this novel happens due to social class.
The society in Gatsby’s time depends on wealth and believe in materialistic life and social classes. Jay Gatsby is one of the prominent example of wealth and depletion. He is dominated by material wealth and class conflict of society. Nick narrates that Gatsby is already leading his luxurious lifestyle with huge money and are in the process of convencing Daisy who is his past love.

Nick states about him, “Gatsby, who represented everything for which I have an unaffected scorn (Fitzgerald. 2). Though he comes from poor family background, but now he is a wealthy successful man, which he earns by selling alcohol to gain Daisy. Daisy is his ultimate goal of life, he thinks that he will be able to impress Daisy and would be accepted by elite group of society with his luxurious house, wealth and upper class lifestyle.

To gain Daisy he wants to enter high class of society with much money like Tom because when Gatsby and Daisy had affair before World War 1, Daisy married a wealth man Tom and betrayed with Gatsby due to his financial standing. Gatsby always keep hidden about his business. But Tom once tells that: “I found out where your ‘drug stores’ were.

He turned to us and spoke rapidly. He and his Wolfshiem bought up a lot of side-street drug stores here in Chicago and sold grain alcohol over the counter. That’s one of his little stunts, I picked him for a bootlegger the first time I saw him and I wasn’t far wrong” (Fitzgerald. 141). To be rich become Gatsby’s life main goal.

Lies, prohibition, immorality destroy the society’s moral decay and also destroy the humanity. For example, to be reunit with Daisy Gatsby uses immoral way to make money and lies about his past and ultimately his past led him to a tragic death. Gatsby once again feels love for Daisy and now his only desire is to be rich overnight to get Daisy’s affections and become bootlegger.

Gatsby “hurried the phrase ‘educated at Oxford’” (p.78). He lies to Nick that he belongs to elite family, complete his education from Oxford due to family tradition and inherited all of his wealth from his family whom are death. Gatsby lies to be accepted by elite people. In Gatsby’s time tendencies of waste and show off is also seen in a wide way. For instance, Gatsby thrown lavish parties to show that he has much money and to prove the elite group of society that he is ‘established rich’ and also to impress Daisy.

F. Scott Fitzgerald draws the picture of modern society’s waste tendencies, and fakeness by telling about the luxuries parties thrown by Gatsby and the guests’ attitude whom are attended at the parties. Fitzgerald also mocks the way of people try to show off their money to impress each other in society.

Gatsby thrown parties from his Long Island’s mansion to make a good impression to the rich people around him and also to prove that he has lot of money. His parties’ unlimited food and alcohol represents the ‘flapper’ age: “At least once a fortnight a corps of caterers came down with several hundred feet of canvas and enough colored lights to make a Christmas tree of Gatsby’s enormous garden.

On buffet tables, garnished with glistening hors d’oeuvre, spiced baked hams crowded against salads of harlequin designs and pastry pigs and turkeys bewitched to a dark gold. In the main hall a bar with a real brass rail was set up, and stocked with gains and liquors and with cordails so long forgotten that most of his female guests were too young to know one from another (Fitzgerald. 41-42).

Gatsby spends his money in a plethoric way like the modern society does just only because to impress his guests and show his upper class lifestyle or excess money. Gatsby’s parties was lasted two days every weekend. Most of the guests of Gatsby’s parties were uninvited and were the same guests each time. Guests were stayed two days each week in Gatsby’s party and took advantage from his hostility.

Nick states that, “But I can still read the gray names, and they will give you a better impression than my generalities of those who accepted Gatsby’s hospitality and paid him the subtle tribute of knowing nothing whatever about him” (Fitzgerald. 61). The guests were attended the party but did not see the person who host these luxuries parties even never try to did that.

Their only work was to attend the parties every week and to drink, gamble and fight with each other because all of them were intoxicated. Gatsby were little seen in the parties and behind him guest gossip about his personal life, “He is a bootlegger. One time he killed a man who had found out that he was nephew to von Hindenburg and second cousin to the devil” (Fitzgerald. 65).

Here Fitzgerald portrays the contempt of modern society for another people. All night people in the party were busy in drinking, singing, dancing, shouting and they were careless about life and this carelessness narrate the ruin of morals in modern society. Through these parties Fitzgerald describes the fakeness of people.

Tom, brutal husband of Daisy was immoral in his marriage due to had an affair with Myrtle (George’s wife). Myrtle wanted to enter Buchanan family to escape from her own class. She told: “’I married him because I thought he was a gentleman.’ She said finally. ‘I thought he knew something about breeding but he wasn’t fit enough to lick my shoe’” (Fitzgerald. 39).

Tom also used Myrtle a lower class women for his own selfish. But later, Myrtle was dead by Daisy due to her pursues over money and social status.
Tom was able to know about the affair of Daisy and Gatsby. Tom tries to convince Daisy by saying that he is a bootlegger. At that moment Gatsby told Daisy: “Just tell him the truth – that you never loved him – and it’s all wiped out forever” (Fitzgerald. 134).

Daisy suddenly threw the Cigarette told that: “’I love you now – isn’t that enough? I can’t help what past.’ She began to sob helplessly. ‘I did love him once – but I loved you too’” (Fitzgerald. 135). But “As a wife Daisy is officially unavailable for exchange” (Godden. 357). She did not leave Tom because of his wealth. 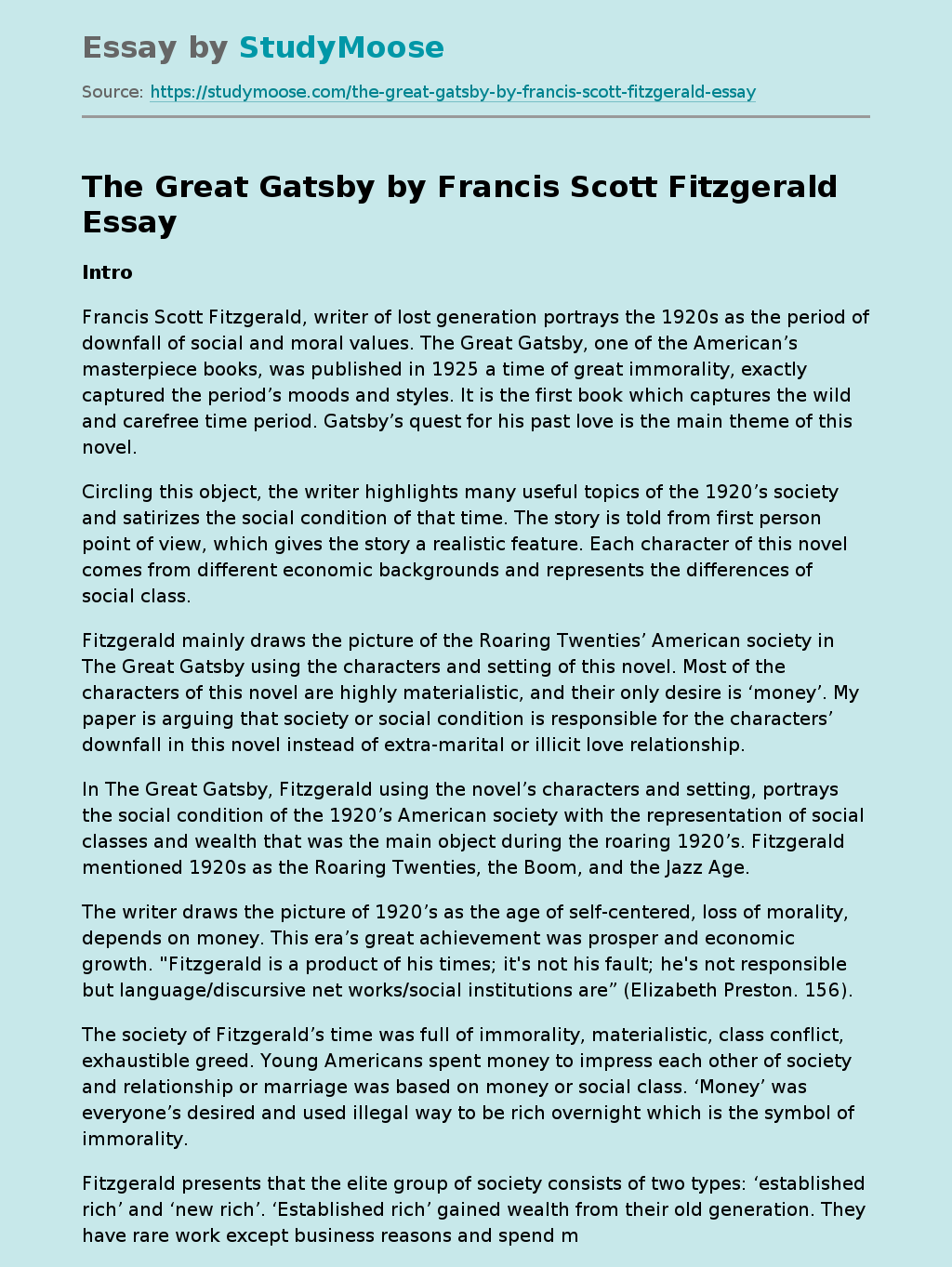