"The Grave," by Katherine Anne Porter

The Grave “The Grave,” by Katherine Anne Porter, is about two young children’s lives and how their past affected them while growing up. Both Paul and Miranda are related as brother and sister.Paul was a twelve year old boy who really enjoyed hunting and gathering skeletons.Miranda was a nine year old girl who use to like shooting targets, and grew up as a tomboy.

They used to live in Louisiana and then later on they moved to Texas.

Don't use plagiarized sources. Get your custom essay on
“ “The Grave,” by Katherine Anne Porter ”
Get custom paper
NEW! smart matching with writer

After they moved down to Texas, their family purchased a small farm and they made a small cemetery in the corner of the farm. After their grandmother passed away, she was buried alongside of her husband and many other close relatives on the cemetery she had used from her farm. Unfortunately, the piece of land that was being used as a cemetery for the family burials was on sale.Later on the land was officially sold and didn’t belong to them no longer.

Both Paul and Miranda on the other hand still played around the land that was prohibited from them to go. For fun they would hunt and shoot arrows at animals that were at sight.

When the trading was official they both headed back home together. Days later Miranda saw an old lady, who reminded her of her own grandmother, and conversed with her. After Miranda finished her conversation with the old woman, her perspective about everything she knew or thought had changed that day. She had realized that hurting animals wasn’t what she wanted to do anymore.

Paul being the brother and boy that he is, took her to hunt rabbits and skinned them in front of Miranda’s eyes. Then he offered to let Miranda skin the rabbits, but she refused her brother’s offer and it caused her sorrow to see the rabbit in so much pain. Soon after Miranda turned twenty, she went to visit India and began to reminisce about her past. As she walked by the markets, who sold farm animals, she lifted her hand where the gold ring was placed on her thumb and looked back at everything her brother Paul and herself did as kids.

Katherine Anne Porter uses the dove, the ring, and the grave. Each symbol symbolizes a different meaning. The gold ring that Miranda found symbolizes luxury. The dove is a symbol of innocence, and the grave symbolizes both death and birth.When Paul had discovered the gold ring in the grave which was actually a discovery of Miranda’s inner self as a woman, which she then slowly accepted it and began understanding and started caring for herself. Miranda describes the woman that craves attention and fashion. The golden ring symbolizes luxury or it can symbolize marriage.When the ring on Miranda’s thumb does not fit, symbolizes that she shouldn’t wear it because it is not meant for her. But on the bright side Paul was fasinated by the dove which shows that he’s simple minded and is a calm person that does not want trouble, but peace in his grandfather’s and his own life.

"The Grave," by Katherine Anne Porter. (2016, Apr 24). Retrieved from https://studymoose.com/the-grave-by-katherine-anne-porter-essay 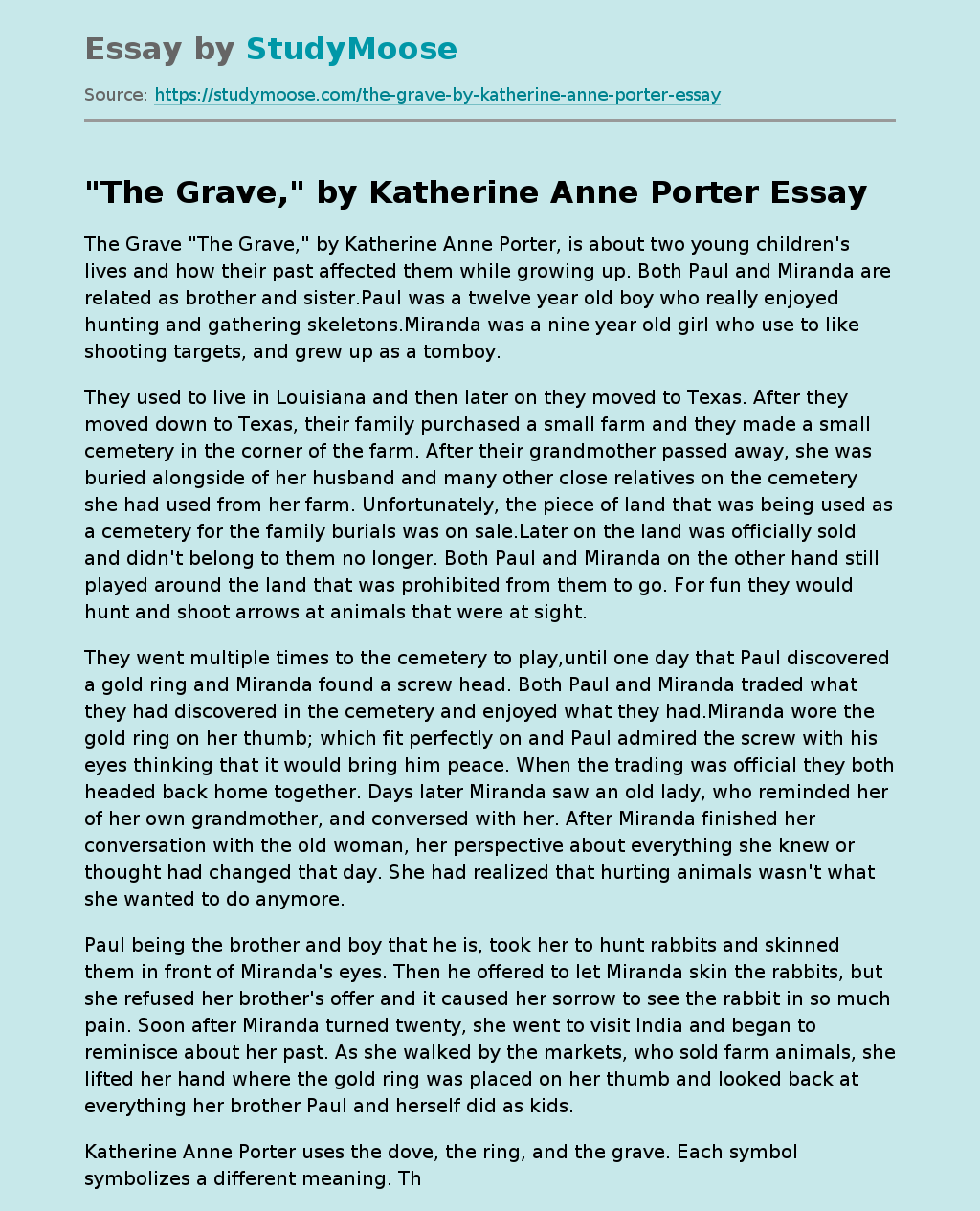