Anthony Harvey’s “The Glass Menageri”e was definitely a movie to remember. A movie to remember to never watch again. In the entire duration of this film I can only say I experienced two things; boredom and well, sheer boredom. The Glass Menagerie, was originally written by Tennessee Williams in 1945 and it was the first of the playwright’s many Broadway successes. Williams is also responsible for classics such as A Streetcar Named Desire and Cat on a Hot Tin Roof.

Don't use plagiarized sources. Get your custom essay on
“ “The Glass Menagerie” Movie Review ”
Get custom paper
NEW! smart matching with writer

This remake of The Glass Menagerie, did not do Williams any justice. The Glass Menagerie is a “memory play” and it was the first of its’ kind. To achieve this type of play, Tennessee Williams included many, precise stage directions in his script. The stage directions-lighting, music, pictures on a screen-were important factors in setting the play apart and making it the success that it was. In the 1973 movie remake however, a lot of these stage directions were ignored, such as the pictures on a screen, the lighting and the focus on characters.

This stripped the play of its individuality, leaving it plain and very lacking. Katherine Hepburn makes her T.V. Debut in this movie by playing Amanda Wingfield, the caring yet unrealistic mother of Tom(Sam Waterson) and Laura(Joanna Miles). Compared to the original script of this play, the dialogue was basically word for word. Though the correct words were delivered, I couldn’t help but wish they were delivered by other people. Amanda(Katherine Hepburn) spoke with such a strange and unintelligible accent that I probably only understood her for about a quarter of the movie and Laura basically whispered everything, so forget about understanding what she said.

The only person I could really understand was Tom, and after an hour of painfully watching this movie, not only was I sympathetic of his poor soul, but I was fully supporting his decision of abandoning his family. I don’t think that was supposed to happen. Some plays were never meant for the T.V screen, let’s make this one of them. You and your money deserve better. So do yourself a favour and watch the play, where the props are all used ,the characters are intelligible and the emotions are well placed. Now,I can’t say that this movie was all bad, it was precise in dialogue and not much was altered from the story, altogether it was arranged well. However, you’re going to need more than accurate duologue to keep someone awake. 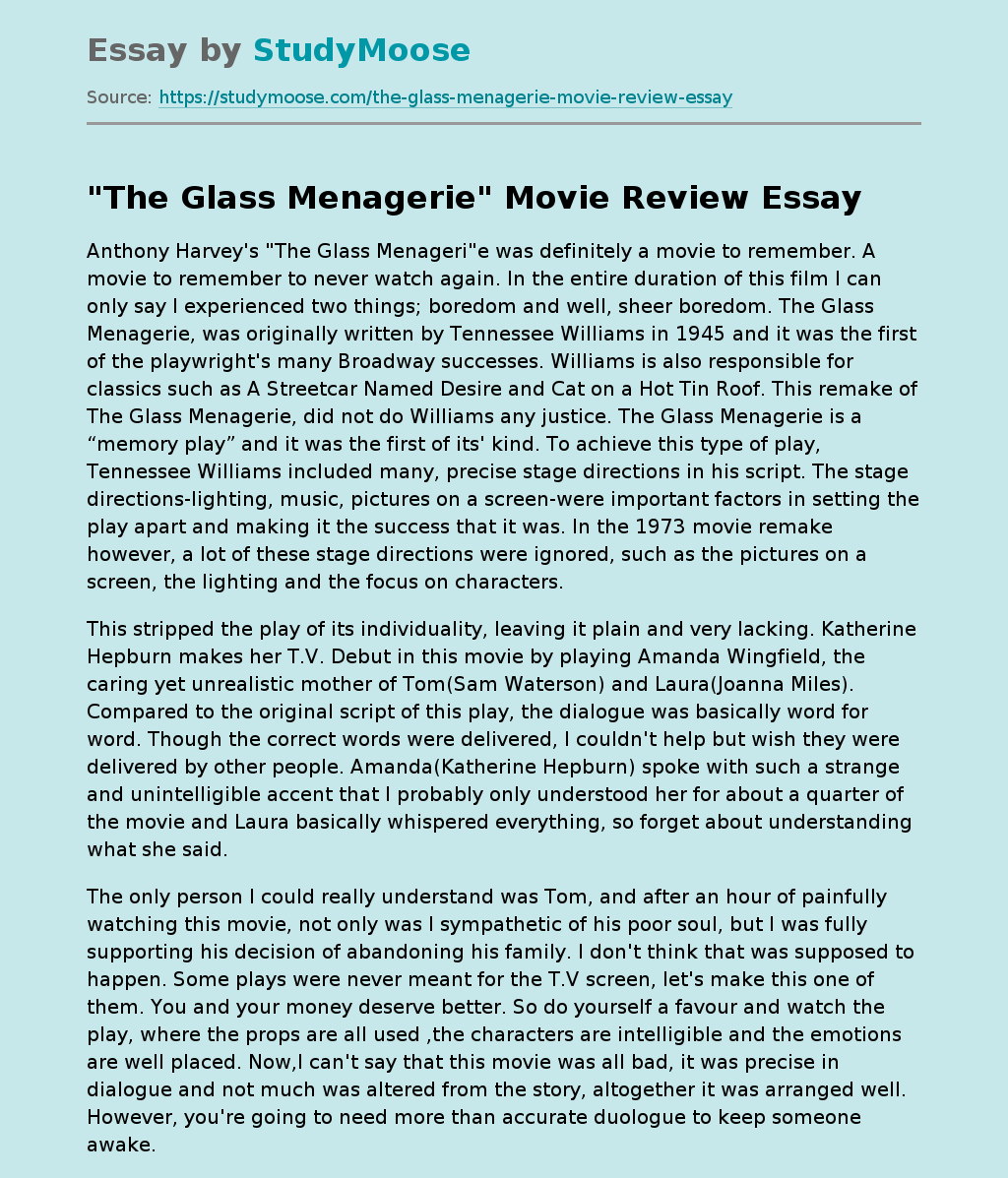