The Giver by Lois Lowry Analysis

In the beginning of the story it begins when Jonas the main character was selected to be the Receiver Of Memory, when the Chief Elder explained that the community only has one Receiver, who will train Jonas personally,The Chief Elder also explains that ten years ago, the previous selection of the old receiver failed, so they have selected Jonas because they couldn’t have a second failure. The Chief says that the Community chose him after years of observing him and that they have had no wrong doubts about his selection.

Don't use plagiarized sources. Get your custom essay on
“ The Giver by Lois Lowry Analysis ”
Get custom paper
NEW! smart matching with writer

Jonas has shown intelligence, truth, and courage, which is The Receiver job. The Chief also warns Jonas that he will face pain and sadness beyond what the rest of the community has experienced. As the Receiver Jonas has the ability to gather wisdom during his training and finally he has the power to see beyond, which neither he nor the rest of the community has seen.

Afterwards Jonas became the Receiver he meet The Giver and they both began to start out easy, The Giver gave Jonas a happy memory which was the first time seeing a rainbow for the 1st day of training, then the giver started to give him harder, painful, and sad memories, hunting elephants,being burned, hunger, and a battlefield, The Giver never wanted to give Jonas those hurtful memories, The Giver believes that Jonas is not ready to be a Receiver Of Memory, He doesn’t want him to end up like the Old Receiver Rosemary she couldn’t deal with all the pain and suffer and wanted to quit which she couldn’t because that’s against the law so she went to Elsewhere and never came back.

Proficient in: The Giver

The Giver still has memories of her playing the piano with him when she was receiver.

When Jonas found out about everything about the Community secrets and what the chief could do to him if he tell his friends about love, color, or having fun with a sled, Jonas also found out that his father that takes care of newborn babies and Jonas’s father was going to killed a baby boy called Gabe for being different from the other babies in the nursing room, Gabe wouldn’t stop crying and he had blue,green eyes and he was different from the rest. When Jonas found out he couldn’t let Gabe die, Jonas took Gabe and protected him from the evil community and tries to leave the Community boundaries to go in Elsewhere, which Jonas cannot allow this to happen, so he takes some leftover food and his father’s bicycle, which has a child seat, and leaves, on his own courage and strength instead of on the memories that the Giver had promised. Jonas has broken serious rules against leaving at night and taking food.

At the end of the book Jonas and Gabe eventually see waterfalls and wildlife, and when Gabe saw a plane, Jonas realizes that gabe has actually seen a bird. Jonas begins to sense that he is approaching to Elsewhere. Jonas and Gabe got to Elsewhere when Jonas had a memory of him being on a sled again and now he has Gabe, when they both got to the bottom of the long hill they found a house and Jonas could hear voices inside, They were in Elsewhere now and had a family right there where he had the same memory before.

The song that relates to Jonas leaving the community was ‘ Somewhere over the Rainbow’. This song related to Jonas,When he wants to go past the other side of Elsewhere, so people can see the memories of the past. This song is going past the rainbow, like Jonas is going past the boundaries.

The main character Jonas has a similar lifestyle as the song I had Chosen ‘Somewhere over the Rainbow’ The lyrics of the song shows how Jonas memories and the new memories he’s having are new to him and also to Gabe, Although he has seen a lot of animals when he was with Jonas he saw a blue bird and also Jonas saw a rainbow, in the lyrics it’s shows them what they had been through, a quote from the song ‘They really sing, “I…I love you.”I hear babies cry and I watch them grow, They learn much more than we’ll know, And I think to myself, What a wonderful world ‘ and also from the book a quote ‘Things could change, Gabe, Jonas went on. Things could be different. I don’t know how, but there must be some way for things to be different. There could be colors Jonas staring through the dimness toward the ceiling of his sleeping room. And everybody would have the memories.You know the memories, he whispered, turning toward the crib. Gabe’s breathing was even and deep. Each night he gave memories to Gabe memories of boat rides and picnics in the sun memories of soft rainfall against windows memories of dancing barefoot on a damp lawn. Gabe? The new child stirred slightly in his sleep. Jonas looked over at him. There could be love, Jonas whispered.’ Jonas loves Gabe as much as he love himself and he want to see Gabe grow and become a normal kid when he grows up, same as Jonas, He wants everybody to have memories and feelings like the people in the community and his friends and family, so everybody could be equal and love what they love or have good memories with friends, and family.

The Giver by Lois Lowry Analysis. (2021, May 28). Retrieved from http://studymoose.com/the-giver-by-lois-lowry-analysis-essay 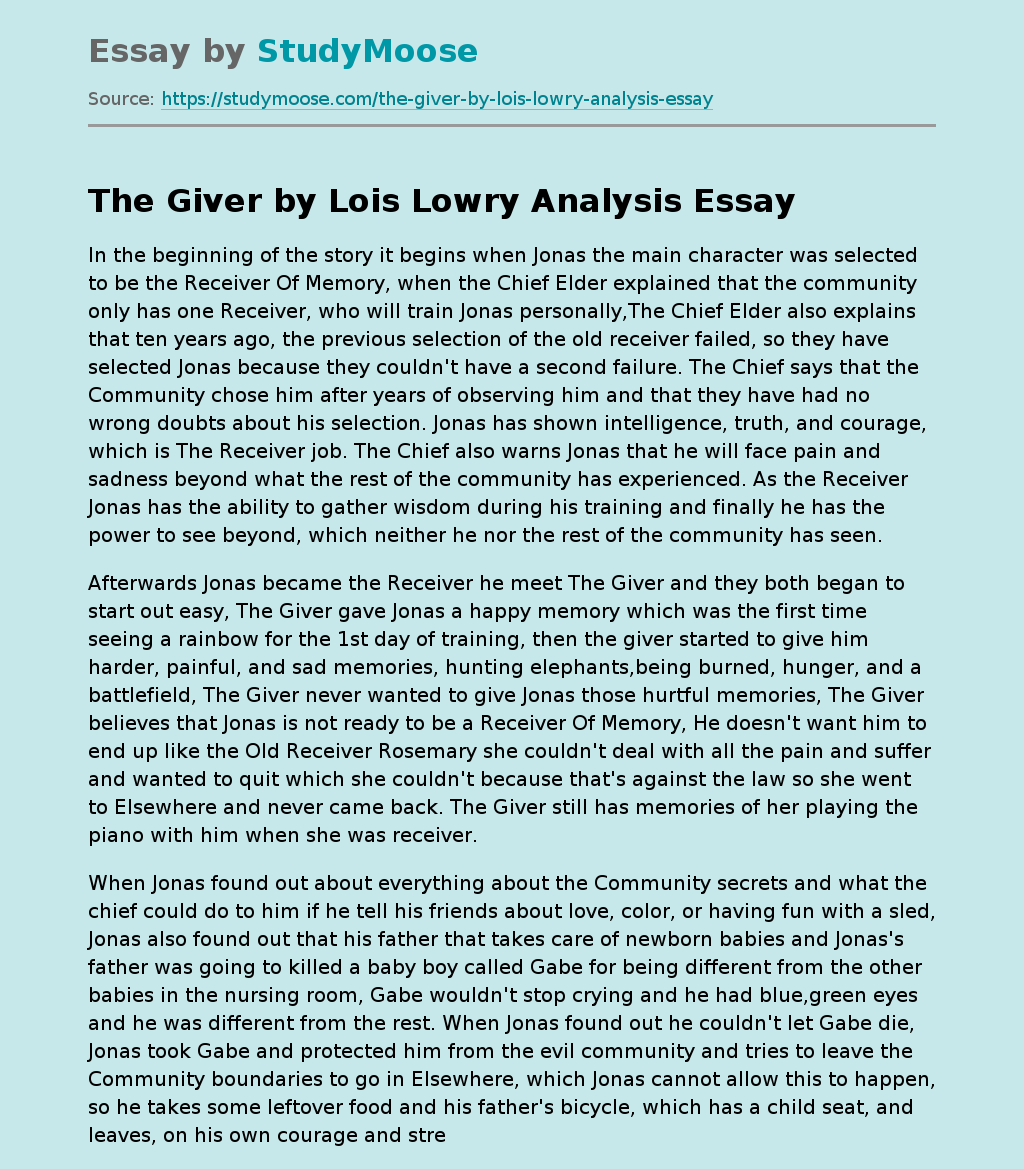