The Funeral Poetry of John Donne's

“As with most poets of his time, Donne was obsessed with death. Mesmerized by its mysteries, charmed by its allure, and convinced of the existence of an afterlife (as a result of Christian theology), he finds himself at times unable to settle on a particular view of the subject. While a considerable portion of Donne’s opus deals with death either directly or indirectly, some poems depict death as insignificant while others present it as something he, and therefore humans, should fear.

Don't use plagiarized sources. Get your custom essay on
“ The Funeral Poetry of John Donne’s ”
Get custom paper
NEW! smart matching with writer

As a Christian, Donne believed (although perhaps did not understand) the concept of an afterlife. This conviction is shown by his understanding of death as a necessary stage before reaching the glory of heaven, the promised life with God” (http://www.luminarium.org/sevenlit/oliver.htm).

The poem begins with a reference to the “subtle wreath of hair which crowns my arm” (3). This small braid was apparently a tradition from the Renaissance era where a woman would give a braid of her hair to the man she loved. He requests that it should be left alone because it is what completes him, his “outward soul” (5). He seems to have made this small symbol of her affection everything he is about. He says he is leaving it to control and to keep her from dying.

How does a small circlet of hair keep her alive? He is keeping her essence, her spirit, and her memory alive by keeping a part of her with him when he crosses over to the other side.

Donne mentions that “These hairs which upward grew, and strength and art/ Have from a better brain” (12-3). The hair the woman gave him is strong and beautiful, but from something better. She seems to be from a higher and better stature than he is so just the fact that he has this braid of hair from her, he feels noteworthy. I take the statement “Can better do it; except she meant that I/ By this should know my pain” (14-5) to mean that he better remember her when he is gone, unless he knows how much pain he is going to be going through when he dies. Donne continues, “As prisoners then are manacled, when they’re condemned to die” (16). His death will mean the loss of her, so the pain he will experience could mean the heartache a prisoner feels having to leave his or her previous life once sentenced to death. A prisoner’s life is over as soon as they are given their condemnation just as a person’s life is concluded when they die.

The third stanza brings him back to where he started, the bracelet of hair. He doesn’t care what her intentions are or were behind the hair, all he wants to assure is that it will be with him when he is laid to rest. The man states that he is “Love’s martyr” (19) and that if some other person happens to stumble on the hair, “it might breed idolatry” (19). The fact that he has the idea that this small braid of hair could create someone to adore it supports the theory that this woman was more than just an average person was. She must have been of some importance in order for him to want to protect it so carefully. He calls the hair a relic, which is “a part of the body, clothing, or other belongings of a saint, martyr, or other deceased holy person which is carefully preserved as an object of veneration.” The use of the word relic helps support the belief of the woman’s significance.

The last two lines of the sonnet are what drive home the impression that whoever this woman was, she was important. “So ’tis some bravery, / That since you would save none of me, I bury some of you” (23-4). She didn’t keep anything that would remind her of him, and yet with some courage, he is able to bury this small token with him. Another interpretation says that “save” used to be printed as “have” which suggests a sexual relationship. This would mean that she didn’t want him in the same way he wanted her, it takes audacity for him to keep something of hers with him for the rest of time.

He was very over protective of the slight braid of hair that he obtained from this female. It is as if he had a small part of a celebrity that he didn’t want anyone else to even have the opportunity to see. It is hard to draw any definite conclusions about who this woman was and what the relationship between she and he exactly boils down to. It is safe to assume however that she was at least of some relevance to him and he was consumed with even the idea of her.

The Funeral Poetry of John Donne's. (2016, Jul 05). Retrieved from https://studymoose.com/the-funeral-poetry-of-john-donnes-essay?post 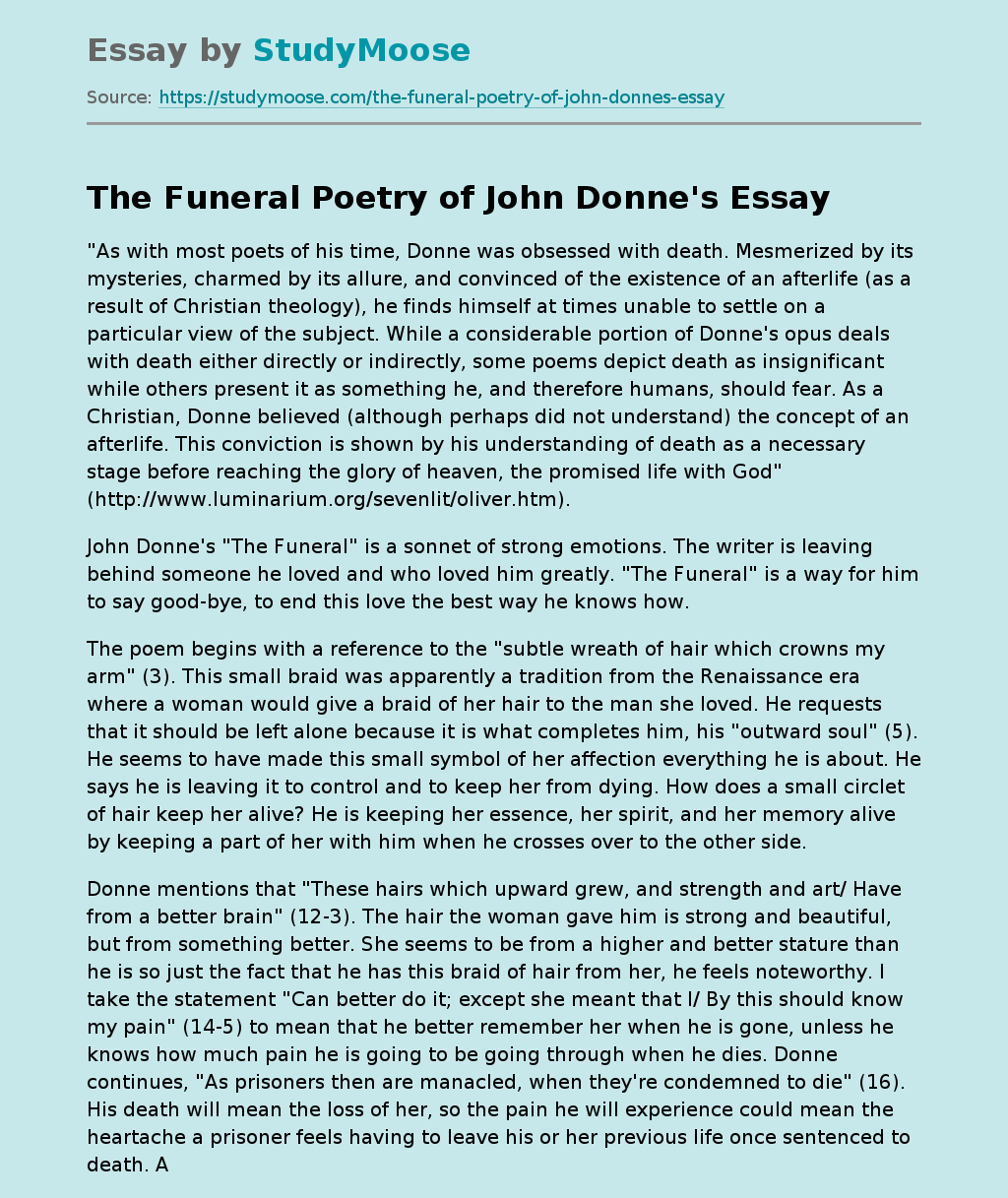