The First Thanksgiving: Journey on the Mayflower

The difficult journey of the Pilgrims began when they left England for Leiden, Holland. At the time, King James required all citizens to follow the Church of England. However like many separatists of the time, the Pilgrims wanted to worship as they pleased (4). After many years in Holland, the Pilgrims decided that it was once again time to move. While Holland was religiously tolerant, the country required the Pilgrims to work difficult jobs that were hard on their bodies. In addition to health concerns, the Pilgrims were afraid that the younger members of their congregation were losing touch with their English heritage.

Don’t waste time
Get a verified writer to help you with The First Thanksgiving: Journey on the Mayflower
Hire verified writer
$35.80 for a 2-page paper

They felt like embarking on a journey to the New World would let them establish a community with their own religion and English culture (17).

The Pilgrims’ journey was supported by a group of investors known as Merchant Adventurers. Represented by Thomas Weston, the investors were responsible for finding a boat to transport the Pilgrims and periodically sending them supplies during their first years in the New World.

In return, the Merchant Adventurers would receive a profit from the resources that the Pilgrims sent back to England (20). After months of preparation, a group of Pilgrims boarded The Mayflower. Driven by Captain Christopher Jones, the boat spent 75 days at sea before finally reaching the shores of Cape Cod (35).

However before they could get off the boat the Pilgrims had to decide where their community should settle. Three exploration expeditions were launched on the shores of Cape Cod Bay (62-63). On the third expedition, Plymouth Rock was discovered and Plymouth was decided upon as the location for the Pilgrims’ settlement.

(78-79). Before leaving their boat dwellings for good, the Pilgrims constructed their first governmental document: the Mayflower Compact. This doctrine formed a rudimentary government for the new settlement and each male was required to sign his name on it, confirming that he agreed to follow the rules of the colony and its leadership (41).

The Pilgrims wasted no time with their construction and quickly began building houses and roads. In addition, they decided to establish a military for protection against the natives. During one of their militia meetings, the pilgrims noticed an Indian watching them from afar. Upon approaching him, the Pilgrims realized he meant no harm and had the ability to communicate in English (92). The Indian’s name was Samoset and was apart of the Pakanoket Tribe. Through this encounter the Pilgrims learned that the Pakanokets meant no harm to Plymouth and wanted to be friends.

A few days later the sachem of the Pakanoket tribe, Massasoit, came to meet the Pilgrims himself. During the meeting a six-point treaty was created that established the alliance between the colonists and the Indian tribe (97-99). The relationship between the Pilgrims and Indians progressed and both communities helped the other. Thanks to the Indians, the settlers in Plymouth learned how to farm corn and hunt for native animals. On the infamous day known as Thanksgiving, the Pakanoket Indians and Pilgrims shared an abundant meal together in celebration of their friendship and success in obtaining food (118-120).

In mid November, an English ship called the Fortune sailed into Cape Cod Bay with 37 new settlers, courtesy of the Merchant Adventurers (123-124). With more healthy and able bodies, the Pilgrims began construction of a massive wall that would surround the settlement and protect the people of Plymouth from attacks (130). During this time, an Indian known as Squanto sought to seize power from Massasoit by turning the colonists against the Pakanokets. As a result, the relationship between the Indians and Pilgrims suffered, and the two groups no longer trusted each other (132-136). Without the Pakanoket tribe, Plymouth was on its own. Their current governor, Bradford, lead the colony with discipline and structure. He strictly enforced religion on all the settlers, even those who didn’t agree with his beliefs (140).

Months after the disagreement between the Pilgrims and Pakanokets, word reached Plymouth that Massasoit was gravely ill and not expected to live. In an act of respect, Edward Winslow and two other Pilgrims traveled to the Indian settlement to see the sachem. Upon arriving, the three men helped nurse Massasoit back to health, mending the broken relationship between their colony and the Pakanokets (142-145). In order to repay the three men for saving his life, Massasoit informed them that Plymouth was in danger of being attacked by an Indian tribe from the north (146). Upon returning to Plymouth, Winslow informed the others about their impending danger and resolved that their best option was to strike the tribe first (149). Lead by their military chief, Standish, the Pilgrims successfully attacked and defeated Wessagussett. This not only saved their colony from a brutal assault, but it also showed the entire region that Plymouth was a strong and dominant colony that shouldn’t be messed with (151-155).

As time progressed the Pilgrims’ relations with the Indians became better. Trade between the two groups continued to grow and a religion was developed through the mixing of native beliefs and Christianity (163). The Pilgrims’ relationships with other colonies also developed. Edward Winslow helped form the United Colonies, a delegation of representatives from nearby colonies that let the different settlements communicate and help each other (180-182). Unfortunately, The Plymouth Colony had entered a great amount of debt around this time, and the Merchant Adventurers had collapsed. The colony’s economic problems were now in the hands of Bradford and other Plymouth investors (168). A civil war being fought in England also made economic times harsher, and many colonists decided to return to England (183).

The Pilgrims and Indians continued to be good friends until the death of Sasamon. After informing Plymouth’s governor that King Philip, leader of the Pakanokets, was going to attack Plymouth, Sassamon was murdered and left dead in a frozen lake. After he was discovered, a trial was held and three Pakanoket Indians were convicted of murder and executed (218-225). The harsh actions of the Pilgrims angered Kind Philip and his tribe. A war broke out between the Indians and colonists, leading to destruction and thousands of deaths. The war ended when a group of natives and Pilgrims came together and assassinated King Philip (337).

After King Philips War, the colonists began to control the Indians. The slave trade began, and male Indians above the age of 14 were taken from their tribes and sold into servitude (345). The Pilgrims now dominated the natives and began a new era that gave them little opportunity or choice.

The First Thanksgiving: Journey on the Mayflower. (2016, Aug 09). Retrieved from http://studymoose.com/the-first-thanksgiving-journey-on-the-mayflower-essay 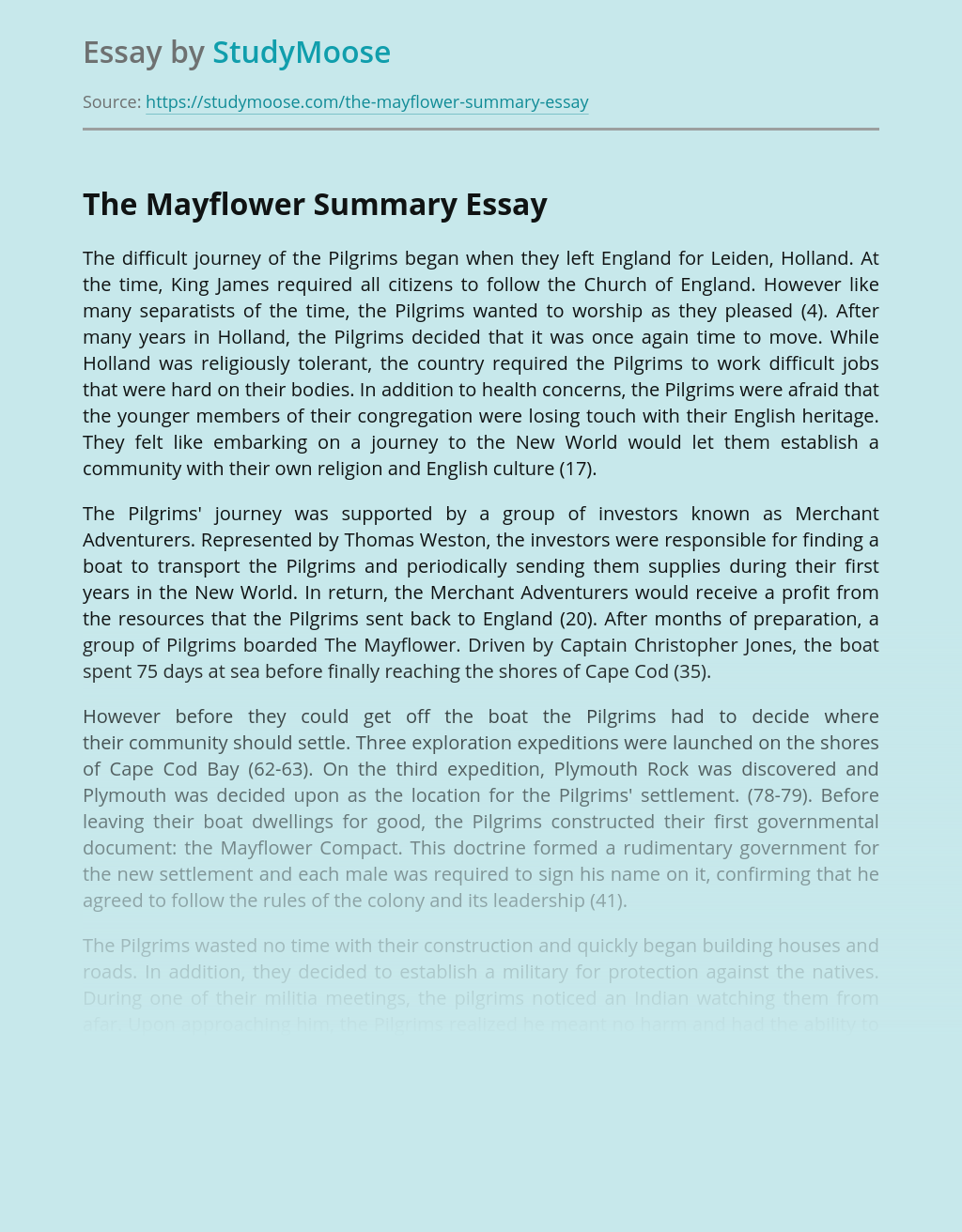 Don’t waste time
Get a verified writer to help you with The First Thanksgiving: Journey on the Mayflower
Hire verified writer
$35.80 for a 2-page paper
Stay Safe, Stay Original