The Federal Bureau of Investigation of the U.S. government, the FBI, was forced to scrap its $170 million virtual case file (VCF) management system. Official reports blamed numerous delays, cost overruns, and incompatible software. But a deeper examination of the cause of this failure uncovered issues of control, culture, and incompatible organizational systems. Among its many duties, the FBI is charged with the responsibility to fight crime and terrorism. To do so requires a large number of agents located within the Unites States and around the world.

Turn in your highest-quality paper
Get a qualified writer to help you with
“ The FBI Case Study ”
Get high-quality paper
NEW! AI matching with writer

That means agents must be able to share information among themselves within the bureau and with other federal, state, and local law enforcement agencies. But sharing informationhas never been standard operating procedure for this agency. According to one source, “agents are accustomed to holding information close to their bulletproof vests and scorn the idea of sharing information.” Enter the FBI’s efforts to modernize its infrastructure, code-named “Trilogy.”

The efforts included providing agents with 30,000 desktop PCs, high-bandwidth networks to connect FBI locations around the world, and the VCF project to facilitate sharing of case information worldwide.

The FBI director explained to Congress that VCF would provide “an electronic means for agents to globally send field notes, documents, pieces of intelligence and other evidence so they could hopefully act faster on leads.” It was designed to replace a paper-intensive process with an electronic, Web-based process. With such a reasonable goal, why didn’t it work? The CIO of the FBI offered one explanation. He claimed that “the FBI must radically change the agency’s culture if the Bureau is ever going to get the high-tech analysis and surveillance tools it needs to effectively fight terrorism.

We must move from a decentralized amalgam of 56 field offices that are deeply distrustful of technology, outsiders and each other to a seamlessly integrated global intelligence operation capable of sharing information and preventing crimes in real-time.”

A former project manager at the FBI further explained, “They work under the idea that everything needs to be kept secret. But everything doesn’t have to be kept secret. To do this right, you have to share information.” The VCF system has been shut down, but the CIO is working on a new approach. He is busy trying to win buy-in from agents in the field so that the next case management system will work. In addition, he is working to establish a portfolio management plan that will cover all of the FBI’s IT projects, even those begun in decentralized offices. His team has been designing an enterprise architecture that will lay out standards for a bureauwide information system. The Director of the FBI has helped too. He reorganized the governance of IT, taking IT budget control away from the districts and giving total IT budget authority to the CIO.

The FBI announced that it will build a new case management system called Sentinel in four phases. The new system, according to the CIO, will include workflow, document management, record management, audit trails, access control, and single sign-on. To manage the expectations of the agents, the CIO plans to communicate often and significantly increase the training program for the new system. The CIO commented, “We want to automate those things that are the most manually cumbersome for the agents so they can see that technology can actually enhance their productivity. That is how to change their attitudes.”

1. What do you think were the real reasons why the VCF system failed?
2. What were the points of alignment and misalignment between the Information Systems Strategy and the FBI organization?
3. What do you think of the CIO’s final comment about how to change attitudes? Do you think it will work? Why or why not?
4. If you were the CIO, what would you do to help the FBI modernize and make better use of information technology? Source: Adapted from Allan Holmes, “Why the G-Men Aren’t IT Men,” CIO Magazine (June 15, 2005), 42–45. 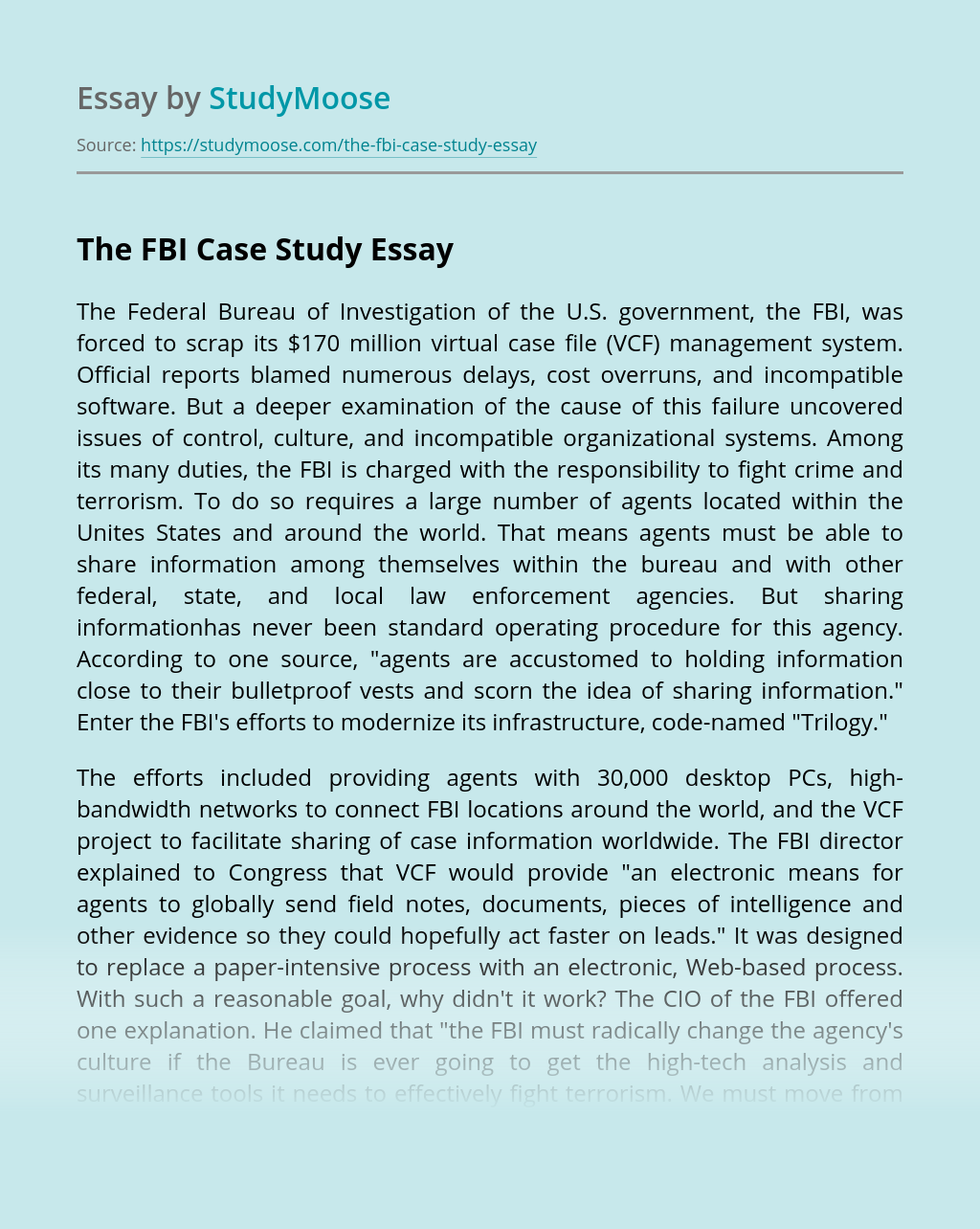 Turn in your highest-quality paper
Get a qualified writer to help you with
“ The FBI Case Study ”
Get high-quality paper
Helping students since 2015
Stay Safe, Stay Original