The emergence of Political parties in the 1790s

Political parties are organized for various reasons, such as: to support a particular political figure, to advance a particular policy or a general ideological stand, to aid politically certain groups or sections of society, or merely to combine for short-term political advantages. From the beginning of the United States, groups such as the Tories, Whigs, Federalists and the Anti-Federalists, have been active, supporting various ideas or plans. The Tories, who were pro-Britaish before the American Revolution, and the Whigs, those who were Pro-American before the American Revolution, were of the earliest groups organized to support a certain cause or idea.

Don’t waste time
Get a verified expert to help you with The emergence of Political parties in the 1790s
Hire verified expert
$35.80 for a 2-page paper

Next the Federalists and Anti-Federalists emerged, alternating supporting and obstructing the ratification of the Constitution. During Washington’s presidency dominant political parties were unknown, but during his second term the emergence of the Hamilton Jefferson rivalry began to. Washington worked to maintain neutrality, but the coming of two dominant political parties appeared close on the horizon. The 1790s were a turbulent period both at home and abroad, and the conflicts that arose laid the foundation of the two-party system in the United States.

First, Hamilton wanted the national debt to be funded at par, which would allow the infant national government to gain respectability and prove their validity and authority.

Hamilton persuaded Jefferson to gather votes for his financial plan if “in return, Virginia would have the federal district on the Potomac” (Bailey 186). Next, Hamilton wanted to create a national bank. Jefferson, a strict constructionist, impetuously argued this to be unconstitutional. Through a loose interpretation of the Constitution, more specifically the “elastic clause”, Washington signed a national bank to be chartered for only twenty years. When Hamilton placed an excise tax upon whiskey, the Whiskey Rebellion took place. The farmers, who were converting their grain into Whiskey because it was easier to transfer, decided to create a rebellion in protest to the Whiskey Rebellion. Despite eager opposition, Hamilton’s programs were passed. From such arguments, the result was not only a split in the administration, but the advent of political parties.

Naturally, “Federalists” supported Hamilton and “Republicans” supported Jefferson. Under Adam’s administration, the Federalists passed the Alien and Sedition Acts as an assault on Republican power. The Alien Acts made it more difficult to become a citizen, provided for detention of aliens in time of war, and allowed the president to deport any alien. “Most European immigrants, lacking wealth, were scorned by the aristocratic Federalist Party. But they were welcomed as voters by the less prosperous and more democratic Jeffersonians” (Bailey 196).

The Sedition Act outlawed criticism of the government of the president; “it was a direct slap at two priceless freedoms guaranteed in the Constitution by the Bill of Rights-freedom of speech and press” (Bailey 197). The provisions of these acts not only challenged the Constitution but caused Jefferson and Madison to pass the Kentucky and Virginia Resolutions that proclaimed the right of states nullification thus being the first proposal allowing disobedience towards Congress if laws exceeded Constitutional authority. Controversial “Federalist” legislation, therefore, led to the creation of a strong opposition party, despite Washington’s warnings of political parties in his Farewell Address.

In addition to domestic affairs, certain foreign affairs contributed to the rise of political parties in the United States. Federalists, many of whom were previous Loyalists, condemned the French Revolution, while Republicans praised its democratic ideals. The Federalists and Republicans expressed contradicting views on nearly every affair. When the British eagerly tried to cut off the French West Indies, they seized about three hundred American merchant ships and impressed many American soldiers. In an attempt to revive peace with Britain, John Jay, a Federalist, was sent to negotiate. The Republicans feared that Jay, being somewhat pro-British, would fail to draw a treaty favoring America. Jay’s Treaty stated that the British agreed to evacuate their forts on the frontiers and pay their damage costs from their recent attacks on American ships.

It forced the United States to pay the debts still owed to British merchants on pre-Revolutionary accounts. The American colonists, especially the Republicans, were disappointed, and felt like they were “cheated” in this treaty. Further, in the XYZ affairs, President Adams sent ambassadors to negotiate with Telleyrand in France in hope to avoid war. The French demanded bribes before the Americans could meet with Telleyrand and negotiate. This event was released in American newspapers and the three men who tried to push bribery over the Americans were known as X, Y, and Z. The American diplomats turned down the bribe and went back to America. “The Federalists were delighted at this unexpected turn of affairs, whereas all except the most rabid Jeffersonians hung their heads in shame over the misbehavior of their French friends” (Bailey 195).

The novel introduction of political parties in the United States provided more than two popular opposing political groups; they served a valid function. With two opposing bodies it allowed opposition to be equal. With the presence of political parties it helped to eliminate the chances of a dictatorship forming. Political parties helped to keep the government in the will of the people; members of each party must compete for offices, therefore to get an office the majority of the people must be pleased on the decisions. “The competition for power proved to be among the indispensable ingredients of a sound democracy” (Bailey 189). The presence of political parties helped to shape the new government into a stable democracy with the involvement of the United States people.

Furthermore, the United States’ affairs and disputes helped to bring about important parties that proved to be crucial in the building of the new government’s operations and authority. Because of Jefferson and Hamilton’s contradicting views a crucial ingredient was emitted that allowed American to become a strong democracy that it is today. Domestic and foreign affairs therefore produced tensions that established the tradition of political parties in the United States.

The emergence of Political parties in the 1790s. (2016, Jun 19). Retrieved from http://studymoose.com/the-emergence-of-political-parties-in-the-1790s-essay 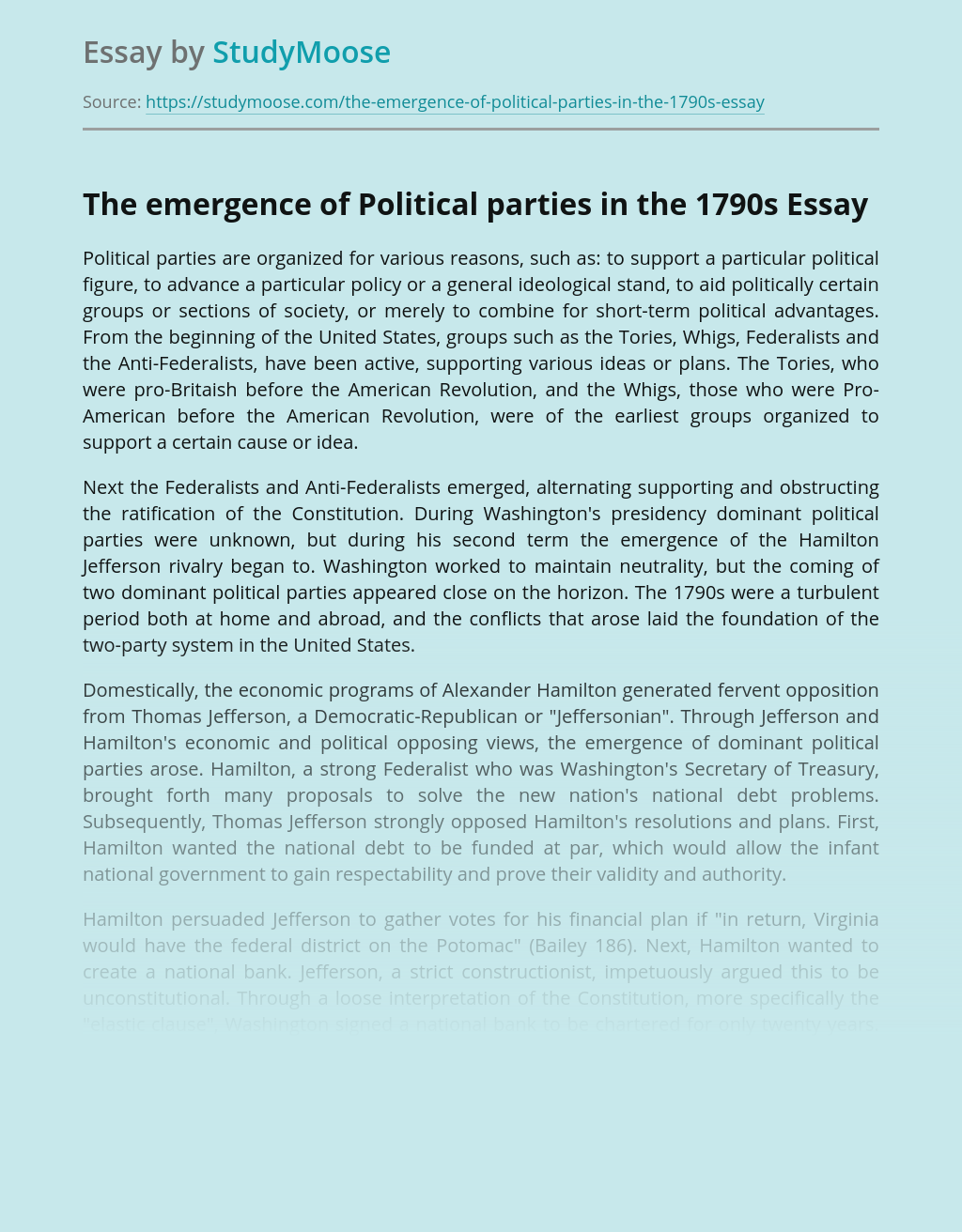 Don’t waste time
Get a verified expert to help you with The emergence of Political parties in the 1790s
Hire verified expert
$35.80 for a 2-page paper
Stay Safe, Stay Original