The Elderly as a Burden

There is a perception in society that the elderly are a burden because some of the elderly might not have planned and prepared for their post-retirement years and old age. Interpretation Some of the elderly may also be unhealthy, incapacitated and have a poor quality of life which means that society will now have to bear the burden of supporting them. StakeholdersHowever, such a stereotype that the elderly will always be a burden to society can be easily debunked.

Don't use plagiarized sources. Get your custom essay on
“ The Elderly as a Burden ”
Get custom paper
NEW! smart matching with writer

The elderly will not always be a burden to society if they are healthy, have planned well and are well-prepared for their post-retirement years and old age.

The elderly might be perceived as a financial burden to society because most of them have hit retirement age and are gainfully unemployed. ExplanationAs a result, the majority of the elderly are financially dependent on their family members. ExampleIn Singapore, there is the Maintenance of Parents Act where elderly parents who are Singapore citizens or Permanent Residents and above the age of 60 can claim maintenance from their children.

In 2012 alone, there were 303 elderly parents who filed a claim against their children. Link Hence, the elderly will be perceived as a financial burden to society because of their inability to support themselves financially as majority of the elderly are no longer gainfully employed.

The elderly are perceived to be an emotional burden to society because to some caregivers, it is psychologically draining to take care of the elderly. ExplanationThe majority of the elderly have a higher tendency to be sad or in low spirits. ExampleIn a survey conducted by professors at the NUS School of Medicine, one in five elderly persons in Singapore aged 75 and above exhibits signs of depression. LinkAs a result, caregivers of the elderly might feel that their wages do not justify the emotional investment required of them to care for the elderly. There might be resentment on the part of the caregivers and cause them to conclude that the elderly are an emotional burden to society.

The elderly are perceived to be a physical and financial burden to society because the infrastructure of a country might have to be modified to cater for an increasing group of the elderly who are wheelchair-bound. ExampleThe Singapore government has set aside S$40 million to co-fund voluntary upgrading on barrier-free accessibility. Explanation Such upgrading of facilities are costly but elderly-friendly. LinkOperators might perceive the elderly to be a financial burden because such upgrading of facilities in shopping malls may deter able-bodied shoppers who prefer to avoid the congested smaller malls under construction in the short run.

It is also unfair to say that the elderly will always be a physical and emotional burden to society. ExampleMany studies on older people’s abilities, frailties and needs have been done. These studies show that there is only a slight drop in ability between the ages of 60-69. ExplanationAnecdotally, many people remain in good physical and mental health. LinkIn addition, the elderly will not always be a burden to society because there are social contributions that they make to society. Many elderly citizens take care of their grandchildren and impart sound values in the process.

The Elderly as a Burden. (2016, Apr 21). Retrieved from http://studymoose.com/the-elderly-as-a-burden-essay 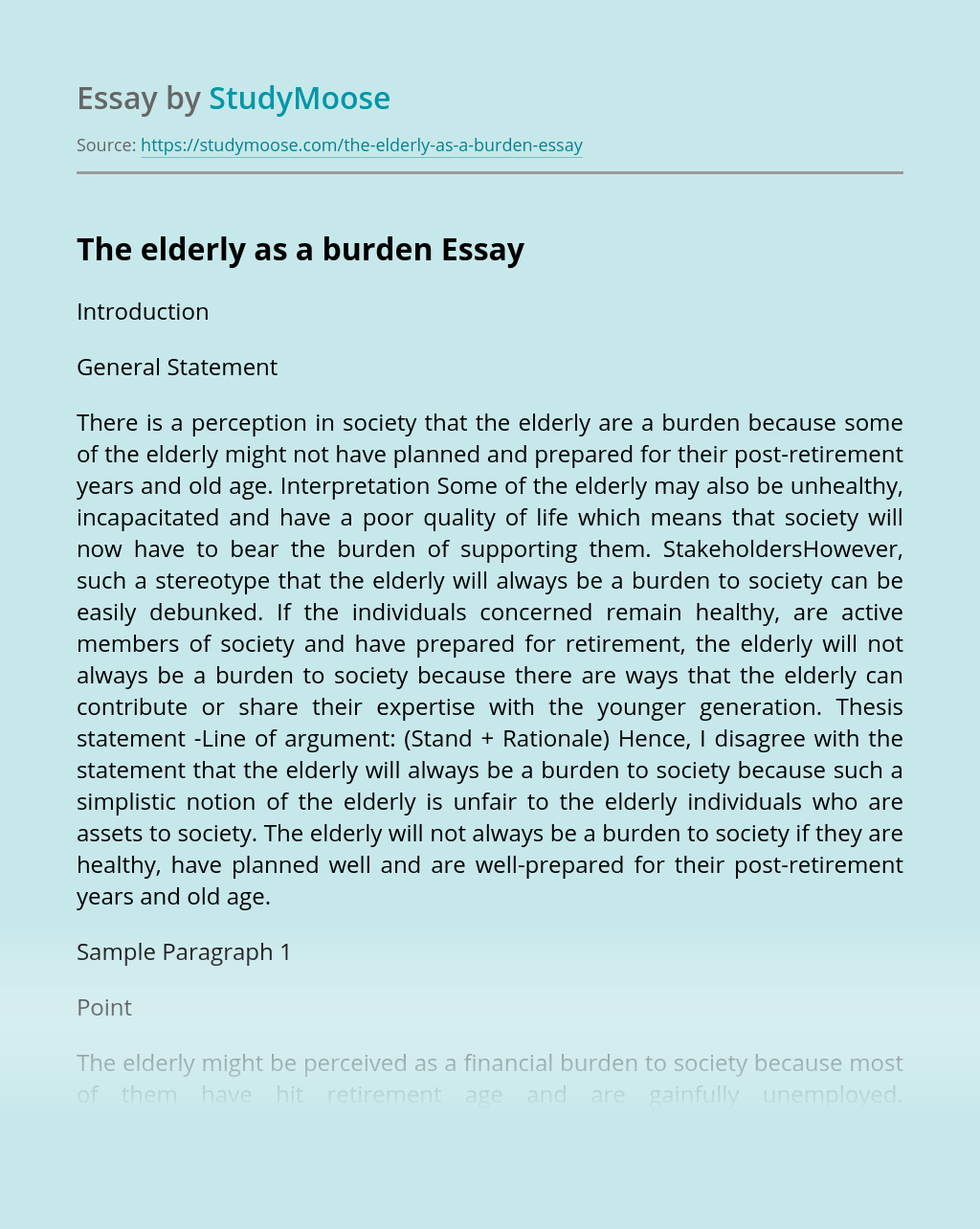