Skateboarding’s resistance to dominant values was embodied by the punk culture, as Humphreys (1997) illustrates the unregulated free nature of skateboarding appealed to punks.

Don't use plagiarized sources. Get your custom essay on
“ The dominant culture ”
Get custom paper
NEW! smart matching with writer

However, the very culture which embodied skateboarding led to its demise, as the middle classes shied away from skateboarding’s associations with ‘punk’. But, skateboarding resurfaced in the early 1980’s, while big businesses dominated Fordist manufacturing, small businesses found new freedom and flexibility. ‘No longer dominated by mass production businesses, the niche skateboard industry did not require large markets to survive’ (Humphreys, 1997, p151).

This economic change enabled technological change, as shop owners did not have to cater for large markets, thus the phenomenon of street skating emerged. Street skating freed skaters as they no longer required parks or ramps to ride, ultimately from this the invasion of skaters within open plazas and squares of the inner cities arrived, but skating remained illegal in many cities. Therefore, to create a legitimate environment the next stage for skateboarding was the formation of a national governing body, the NSA (National Skateboarding Association).

The NSA aimed to encourage the commercial growth of the sport. ‘The current president of the NSA, Don Bostick, reiterated this commitment to a corporate form of sport by describing the NSA’s goal as making skateboarding more professional and accepted’ (Beal, 1995, p257). This illustrated that from the start the aim of the NSA was to incorporate into skateboarding mainstream values, which are a kin to the dominant sports culture. These processes illustrate the originally pure nature of skateboarding, whilst over time it has become incorporated into mainstream culture.

However, this view is somewhat dated and theorists such as Beal now recognise that skateboarding was not in a cycle, and incorporation into the mainstream culture did not occur overtime. Alternatively, it is now believed that skateboarding has the values of the mainstream culture within them from their inception, these are values such as the post modernist values of consumerism. ‘In our post-modern image culture, media culture in all its forms provides many of the resources for identity, how we come to understand ourselves’ (Kellner, 1995; Cited in Wheaton and Beal, 2003, p156).

From its inception, skateboarding held many of the values that were similar to the punk movement. ‘As a musical and fashion style, punk was part of an underground movement that promoted spontaneity, doing things for their own sake and work as play values’ (Roberts, 1983, Cited in Humphreys, 1997, p167). Therefore, values which tie in with the mainstream values of consumerism were evident from the beginning, skateboarding has always held values similar to the mainstream culture. Skateboarding produces an image more likened to post-modernist sport.

‘Post-modern sport and leisure is depicted as being dominated by commercial consumption’ (Crouch & Tomlinson; Cited in Wheaton, 2000, p269). The success of skateboarding has arguably always been dependant on the consumption of skateboarding products. Many argue that the similarities between skateboarding’s values and those of the mainstream post-modern values, can be seen as a consequence of the influential media. ‘The media’s power in deciding what is considered snowboarding, and what will be lucrative, significantly affects the popular digestion of the sport, its commodification, and its practice’ (Heino, 2000, p184).

Therefore, countercultural sports are seen as part of the dominant sports culture; as, through media, such as magazines, they indicate to their readers what they feel skateboarding indicates, which is typically translated through the content of subcultural magazines. The overwhelming amount of adverts for skateboarding products within magazine coverage seems to offer the readers the chance to be a member of an exclusive group. ‘Advertising campaigns for products…

offer a bricolage of transient images of extreme sports, images that affirm that if you want to become one of them, you need to focus on image, style and fashion’ (Kellner, 1995; Cited in Wheaton, 2000, p269). Therefore, as shown through a complex system of processes, it is possible for countercultural sports to simultaneously resist and reproduce the ideals associated with the dominant class. ‘Many resistant subcultures are not singularly transformative, but they do include forms of challenge as well as forms of accommodation’ (Beal, 1995, p254).

Within skateboarding, this certain phenomenon of challenging and reproducing the values of the dominant sport is illustrated through the participation in competitions. Consequently, there is a reproduction of corporate bureaucracy achieved through the formation of competitions; however, subcultural values are transferred into these competitions. ‘The ability of the skaters to resist and negotiate with the CSA representatives demonstrated that they successfully challenged the official agenda.

The skateboarders’ resistance to the CSA-sponsored competition is an overt example of the struggle between the values of corporate bureaucratic interests (e. g. , control by authority, elite competition) and the grassroots interests (e. g. , control by participants, open participation)’ (Beal, 1995, p259). Therefore, skateboarding competitions are shown to be undertaken in a de-emphasised manner, with a heightened focus on the participation, instead of the winning. ‘Skaters used the contests to meet new people, learn new tricks, and skate on new and challenging courses…

There are no exclusive positions, no champions, no elite standards, no end goal to achieve, and nothing to win’ (Beal, 1995, p257-258). This illustrates how subcultural sports can use aspects of the dominant class, reproducing dominant values, but through changing the signification, reflect their own countercultural ideologies. Subcultures primarily exist in opposition to the dominant culture, there is always a space offered where subcultures can challenge the power of the dominant classes.

Therefore, to illustrate whether the meanings held within the magazine support the traditional subcultural values of resistance, or reproduce values reflective of the postmodernist culture, an analysis of the text will be conducted. The analysis will investigate the extent to which the supposed resistance to hegemony is actually reflected by subcultural magazines. In order to analyse the content of the subcultural magazine, the qualitative method of semiotics will be utilised.

A semiotic analysis will determine whether subcultural magazines reflect the supposed resistance of skateboarders, as through semiotics text can be de-coded, illustrating hidden meanings behind the text. ‘Semiotics is primarily a mode of analysis that seeks to understand how signs perform or convey meaning in context’ (Manning, 1987, p25). Strinati (1995) shows that semiotics is the science of signs; it is a model of structural analysis derived from the theory of structuralism. Structuralism is the theoretical framework studying the deep structures of a text. 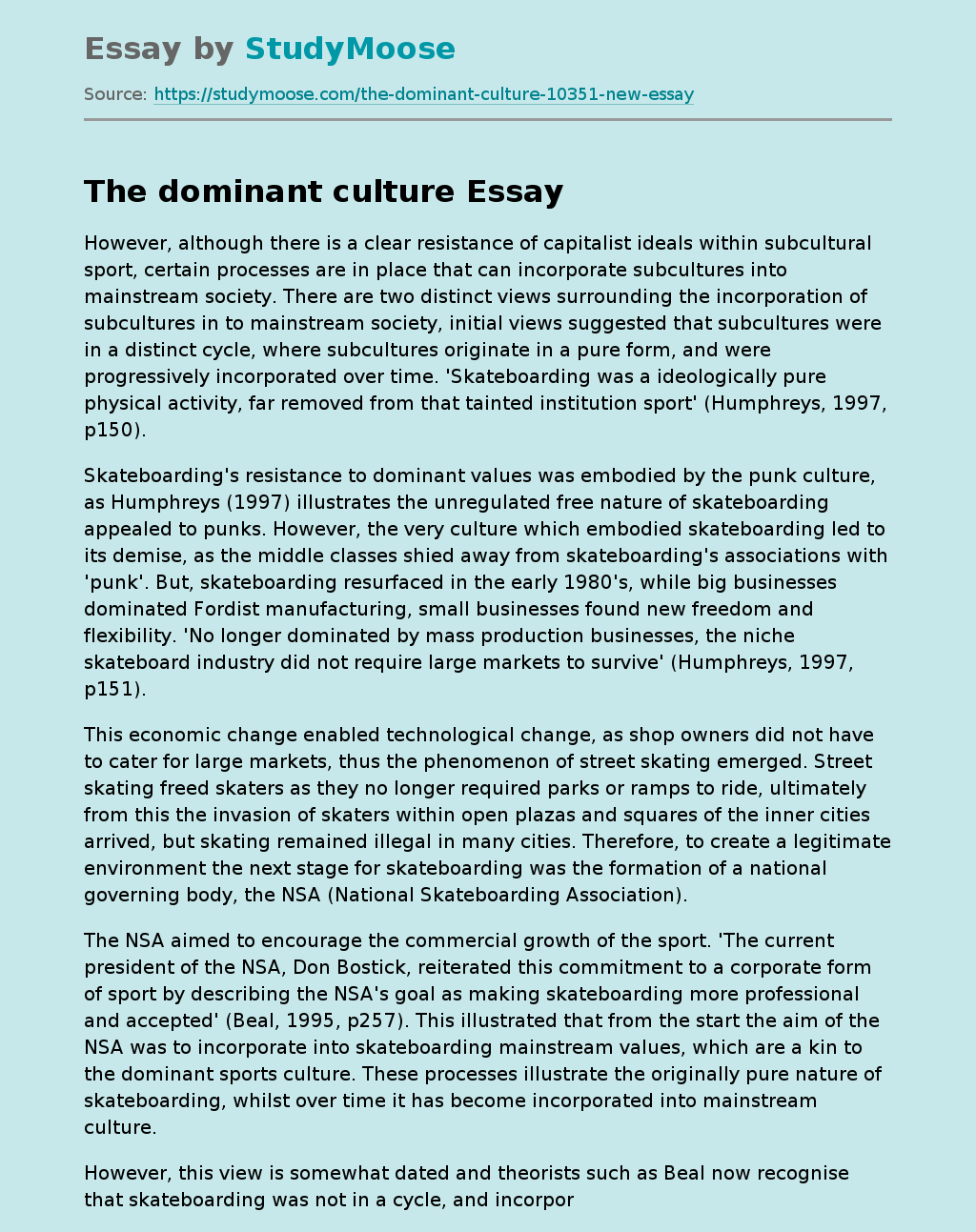