The Difference Between Convergence and Divergence

The concept of convergence and divergence are clearly defined within two distinct paradigms of ER. Convergence is modelled on the association that all ER will converge or become uniform (Kerr et al 1960) throughout the globe. While convergence supporters may provide a somewhat utopian view, the principles behind convergence are idealistic in their view. This concept is streamlined while allowing for the transfer of human capital with little differences of awards, unionism and other factors. While this concept may provide the globe with a safety net, factors that may work against convergence are political, social, cultural and ideological as well as different IR systems that are in play globally.

Don't use plagiarized sources. Get your custom essay on
“ The Difference Between Convergence and Divergence ”
Get custom paper
NEW! smart matching with writer

Uniformity does present an ideological view in an illogical world, and yet convergence has many supporters such as (Clift; 2006 ; Loredo and Suarez, 1998). Comparative ER studies takes into account the impact of globalization on national ER and there is debate on the convergence and divergence systems of ER. Convergence system proposed by Kerr, Dunlop, Harbison and Myers in 1960 focus on the international influence of industrialization, technology and market forces on the convergence or uniformity of industrial relations systems (IR).

It means development of common features across societies that adopt industrialism and related forms of production and organizations. Industrial societies have to create ways of developing IR systems based on ‘pluralistic industrialism’. Alternatively, the technology that induces social changes related to industrialism. Convergence happens in industrialized societies at different levels such as technological, workplace, industry, urban and national levels. Presence of social, cultural, ideological differences is obstacles to total convergence.

Studies that explored the degree of convergence in national IR systems showed presence of persistent differences, which can be a reflection of their responses to industrialization through attempts to handle issues.

Regulatory systems are common in capitalist economies, which will be changed by the developments in technology and industry, leading to economic and social crisis. This initiates development of new systems. Therefore, convergence in effect does not produce identical systems in industrialised countries. In many modern industrial societies, liberal-democratic institutions and pluralist mixed economy play a role in industrialisation and late developers successful to adopt suitable organizational forms. For example, Japanese manufacturing firms are successful in focusing their approach to IR for better manufacturing practices. , thus becoming a role model for others to converge.

While the concept of convergence has been discussed, divergence offers a different view of ER, which is dualism. The description for this has been seen as where the workforce is separated into core and peripheral employers. Individualism and differences in employment patterns underpin the concept of divergence (Bamber et al 2004). The growing use of technology and the organisational structure are one factor in the growing trend of how organisations develop.

Divergence theory means coping with macro economic problems, developed during 1980s. For example, countries such as Norway, Sweden, Austria and Germany have introduced corporatist state policies for balancing the interests of employers, unions and the state, while in Britain and USA, traditional systems of collective bargaining have been replaced by market based dualistic IR system. In this system, the workforce is divided into peripheral employees as a collective bargaining framework and core employees under individualistic work arrangements. The logical and political features of both systems are opposed to each other; hence, one may dominate the other, in course of time. Divergence theory is supported by the recent development in a variety of technology and organizational structure in different directions. Employment structure has been changed from industrial based to service based.

Formation of subcontracting firms, increasing part time and white-collar jobs increased number of women in the labour market and worker-involvement work strategies are examples of such developments . Other divergent trends are growing heterogeneity between and within national ER systems and individualization within the work force. The individulisation trend has caused de unionisation in many countries with unions representing smaller proportion of the employees Labour movements caused fragmentation of many firms which tried to maintain organizational unity at the national and sectoral level. Hence, unions faced more pressure to preserve continuity and organizational change along with innovations. Freeman (1989) pointed out the divergent trends in union membership and density among developed market economies (DME). Since the 1980s, union density has increased in the Scandinavian countries while it declined in the UK, Australia and USA, in spite of having similarities in increasing trade, technological transfer and capital flows between them.

The MIT project involving scholars from different countries re-examined ER among developing market economies (DME) and analysed arguments of Kochan, Katz and McKersie (1984) that changes in the American IR from late 1970s had resulted in a key change in the managerial strategic choices con firm-level ER practices. The authors pointed out that only by adding ‘strategic choice’ dimension to Dunlop’s framework, the above change could be identified well. They suggested framework in the form of a matrix that included three levels of decision-making -macro, industrial relations system and the workplace- each level having independent effect on ER, and three parties such as employers, unions and government. The rows of the matrix represented three levels and the columns, the key parties. The MIT project analysed the relevance of strategic choice framework across countries and the effect of competitive strategies on firm-level ER.

The first stage of the project was identification and comparison of developments in different countries. The second stage examined industry- wise ER in these countries. Organizational work practices such as new work rules due to adoption of new technologies and competitive strategies, changes in patterns of skill acquisition and training, new remuneration systems for the employees, new practices on staffing, employment security and recruitment were studied. Data was analysed country-wise and industry-wise to compare two hypotheses- one stressed on the importance of institutional structures that influence ER and the other on the range of strategic choices for international competition and technological changes. The result showed the importance of enterprise and management on strategic decision making in ER, need for flexible workforce and deployment of labour, trends in investments for skills and training development and the restructuring needs for unions.

Following the MIT project studies investigated relevance of convergence and divergence theories, (Katz and Darbishire 2000) and showed difference in of employment patterns across countries such as low wage, HRM, Japanese oriented and joint team – based and many ‘converging on divergence’ patterns. These differences include centralization of bargaining, commonality of processes at a decentralized level and coordination between decentralized bargaining structures. However there is a lack of empirical evidence that the patterns are not mutually exclusive. The convergence and divergence concepts are too limiting to identify the degrees of relationships between globalization and national ER. For example, studies on wage inequality may point out convergence while studies on participation rights may point out divergence.

The Difference Between Convergence and Divergence. (2016, Jun 06). Retrieved from https://studymoose.com/the-difference-between-convergence-and-divergence-essay 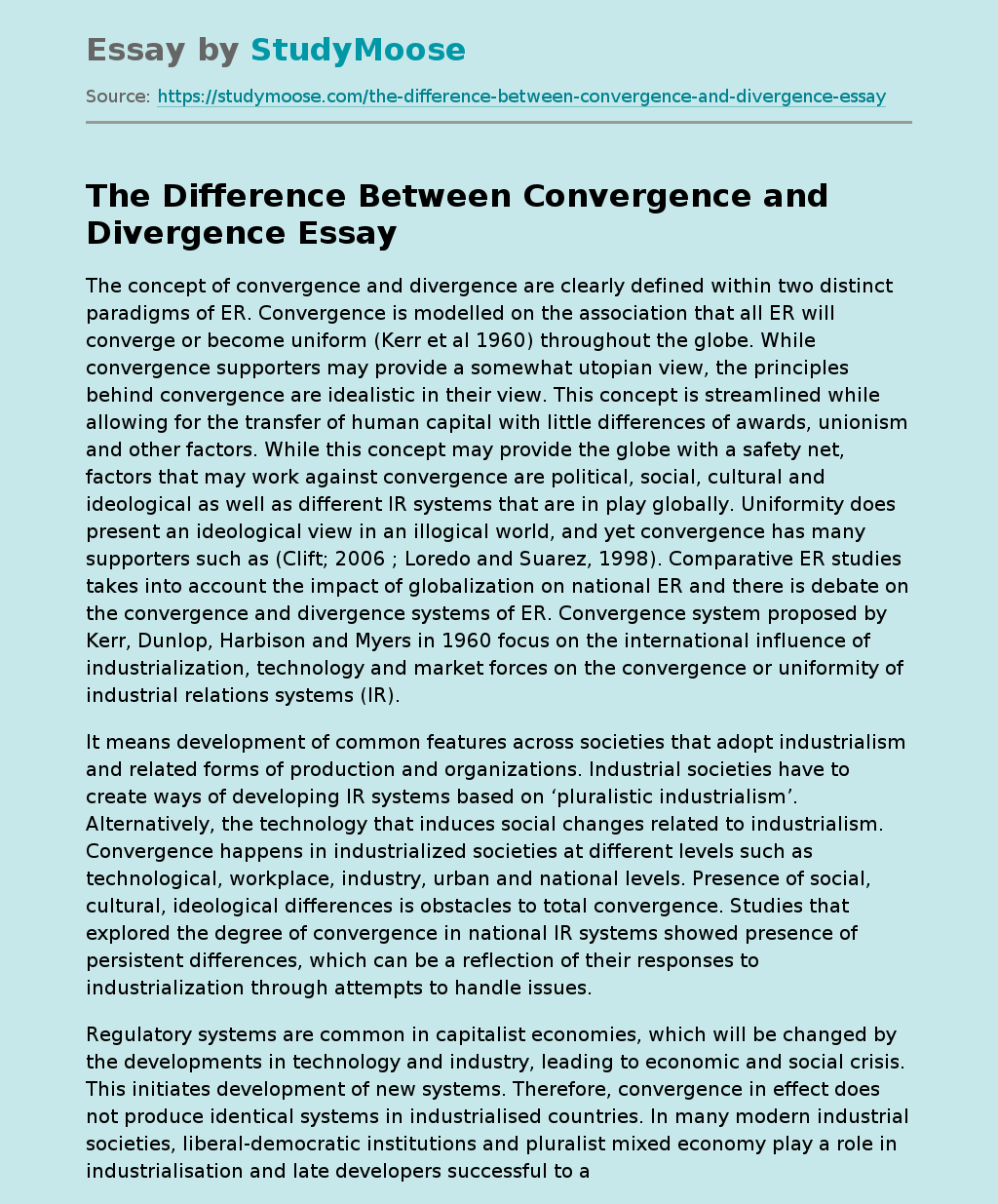