The death penalty or capital punishment has been part of our humanity for years and years. Existed since ancient times, according to people a person who has committed an atrocious act, was sentence to death penalty or capital punishment. The death penalty begins back in the 18th century B.C. in the code of king Hammaurabi of Baylon; who was accused of committing 25 crimes. In years past, the punishments where more crucial then today, the execution procedures had no boundaries, forms of killing where endless.

Don't use plagiarized sources. Get your custom essay on
“ The death penalty or capital punishment – Furman v. georgia ”
Get custom paper
NEW! smart matching with writer

Drowning, whacking, “damnatio ad Bestia” which was death cause by a wild animal, dismemberment: dividing the body into quarter-usually with an ax, throwing then off a high place, impalement: one of the most crucial consisting in beating them with a stick, buried alive, the guillotine: decapitation, wretch they refer as the “quick, clean and humane” way of doing the killing, death by torture, stoning crucifying was also consider a death penalty act. Jesus Christ was crucified in Jerusalem part of his punishment for being the son of God.

Within times pass the process change a little to decapitation, execution, hanging, electrocution, execution by gas and the one use to date lethal injection.

(1. History of death penalty) One of the cases that reach the Supreme Court and change the laws in the United States about the death penalty was the case of Furman v. Georgia in 1971. William Henry Furman claimed that his sentencing violated his rights guaranteed by the 14th amendment. (The 14th Amendment was passed after the American Civil War, and was designed to prevent states from denying due process and equal protection under the law to their citizens.

And was dividing into sections: the first section of the amendment was to revolutionize federalism, stated that no state could “deprive any person of life, liberty, or property without due process of law; nor deny to any person within its jurisdiction.

The equal protection of the laws, gradually the Supreme Court interpreted the amendment to mean the guarantees of the bill of rights apply to the states as well as the national government.) (2. Our documents) Furman’s v. Georgia: Furman was a 26year old man with very little education. A man that struggle his whole life about making a living, was very depressed and moody all the time there were days when he didn’t have anything to eat, and that’s when he started breaking into homes to be able to survive.

He was caught a couple of times but was giving a light or suspended sentence. A psychiatrist had already diagnosed him with emotionally disturbed and mentally impaired. But was still entering homes in order to live. On August 11, 1967 Furman enter a home and was going through some things when he heard a noise and try to escape the home, some said he drop the gun and when it hit the ground it shot and others said he felt and the gun discharge killing Mr. William Joseph Micke Jr. a husband and father of 5 children. The death was truly a tragic, it was an accident that resulted in murder, and his carrying a gun was to protect himself in case or to even scare a person and be able to run without any incidents.

Furman despite of his conditions was convicted of murder and sentence to death in a one day trial. Although Furman did not intend to kill the resident he regales committed murder during the commission of a felony, and was an aggravating factor, and the one in particular which made him eligible for the death penalty (3. Murderpedia) When the trial approached he pleaded not guilty by means of insanity, which was the advice of his appointed attorney. The court at that time order another psychiatric test and the physicians who examined agreed that he was mentally deficient and in the report they concluded that Furman experienced mild to moderate psychotic episodes associate with convulsive disorder. After a few weeks in a hospital assigned by the court, the Dr. said he knows what’s right from wrong and that he was competent to stand trial for murder.

Although killing was an accident, the state of Georgia at the time authorized that the death penalty be giving weather a murder took place during the commission of a felony. Furman had one thing going against him at all times; he was a black man in the 60s and 70s and most blacks guilty of committing murder in that state was a reason enough to sentence to death penalty. In 1972 the case reach the Supreme Court which they rule 5-4 that the death penalty as then administered violated the 8th amendment proscription against cruel and unusual punishment and the 14th amendment equal protection clause.

The courts typically issue the decision with a majority opinion written and sign by one of the justices. On occasion the court will issue a per curiam decision which takes the form of a brief, unassigned opinion. All 9 judges had different opinions, although 5 justices voted to reverse the death sentences, there concurring opinions revealed that it was shaky coalition. Each majority justice, Mr. Douglas, Mr. Stewart, Mr. White, Mr. Marshall, and Mr. Brennan, wrote a separate concurring opinion supporting the majority decision. Each believed that Furman had indeed been deprived of his constitutional rights. The justices could not agree on an argument striking down the death penalty across the board, however. This unusual procedure reflected not only the intense differences of opinion within the majority, but also the difficulty of deciding the constitutionality—or presumed lack thereof—of the death sentence.

The four dissenters, Chief Justice Burger and Justices Blackmun, Powell, and Rehnquist, also wrote extensive opinions expressing their views against the majority opinion. Several argued taking the position of judicial restraint that the death penalty was a matter for the people to decide, through their legislatures. Others argued that emotional appeals were not appropriate in Supreme Court opinions. Finally, the dissenters were disturbed by the erosion of federalism and the unnecessarily invasive judicial activism practiced by the justices of the Warren Court. They said that it was disproportionally applied to the “poor and despised” that it was applied in an arbitrary and capricious fashion.” Justice Douglas was the man that came up with the idea to review the historic of the death sentence penalty for both America and England.

This justice noticed that the laws was extremely unfair because it was applied only to the minorities, the outcast and the smaller population in the country. He decide that the death penalty was unusual and against Gods Plan. Furman centered on the convictions and death sentences of 3 African American men. His case ended changing the way they see each individual case. (4. Law Cornell My opinion on this case is that everyone should be treaty equally, his intent was to commit a crime of robbery not a murder.

Further, specific jury findings of “aggravating circumstances” were necessary to impose the death penalty. There was therefore no Eighth Amendment violation, and the death penalty was constitutional. (5. Georgia encyclopedia/ 6. Lectlaw) Gregg v. Georgia took place on March, 1976. The case dealt with administrative law; this legal field controls the “due process” clause of the United States Constitution. The due process clause is defined as the government’s obligation to respect and uphold the legal rights of American people during and after they are arrested.

Both the Federal and state governments are required to protect and preserve a person’s human rights and liberties. All governments of the United States are required to treat citizens in a fair and respectful manner during the arrest process. When he appealed his sentence as “cruel and unusual” and a violation of the Eighth Amendment, the US Supreme Court in a 7-2 decision upheld the sentence.

The court ruled that the death penalty was an appropriate punishment in extreme criminal cases and that Georgia had settled appropriate values and other precautions to guide a jury’s considerations in capital cases. He was sentence to death penalty do to the fact that he entered the house armed so he meant danger to the community and that his purpose was to commit the crime. The United States Supreme Court stated that the execution of Troy Leon Gregg was Constitutional due to the fact that Mr. Gregg was tried, head and sentenced through a formal judicial system. The night before he was supposed to be killed, Gregg escaped from prison and was killed in North Carolina following a fight. (7 law cornell) In this case the court upheld the constitutionality of the death penalty, defending statutes that guide judges and juries in the decision to issue the death sentence.

The Court did, however, state that the madatory use of the death penalty would be prohibited under the Eighth Amendment as cruel and unusual punishment. The defendent in this case, Gregg, had been convicted on two counts of armed robbery and two counts of murder. The jury was instructed by the trial judge, who was following Georgia state law, to return with either a decision of life imprisonment or the death penalty. Justice Byron stated in his opinion that Gregg had failed in his burden of showing that the Georgia Supreme Court had not done all it could to prevent discriminatory practices in the forming of his sentence. This decision became the first time the Court stated that “punishment of death does not invariably violate the Constitution.” (8. Death penalty) 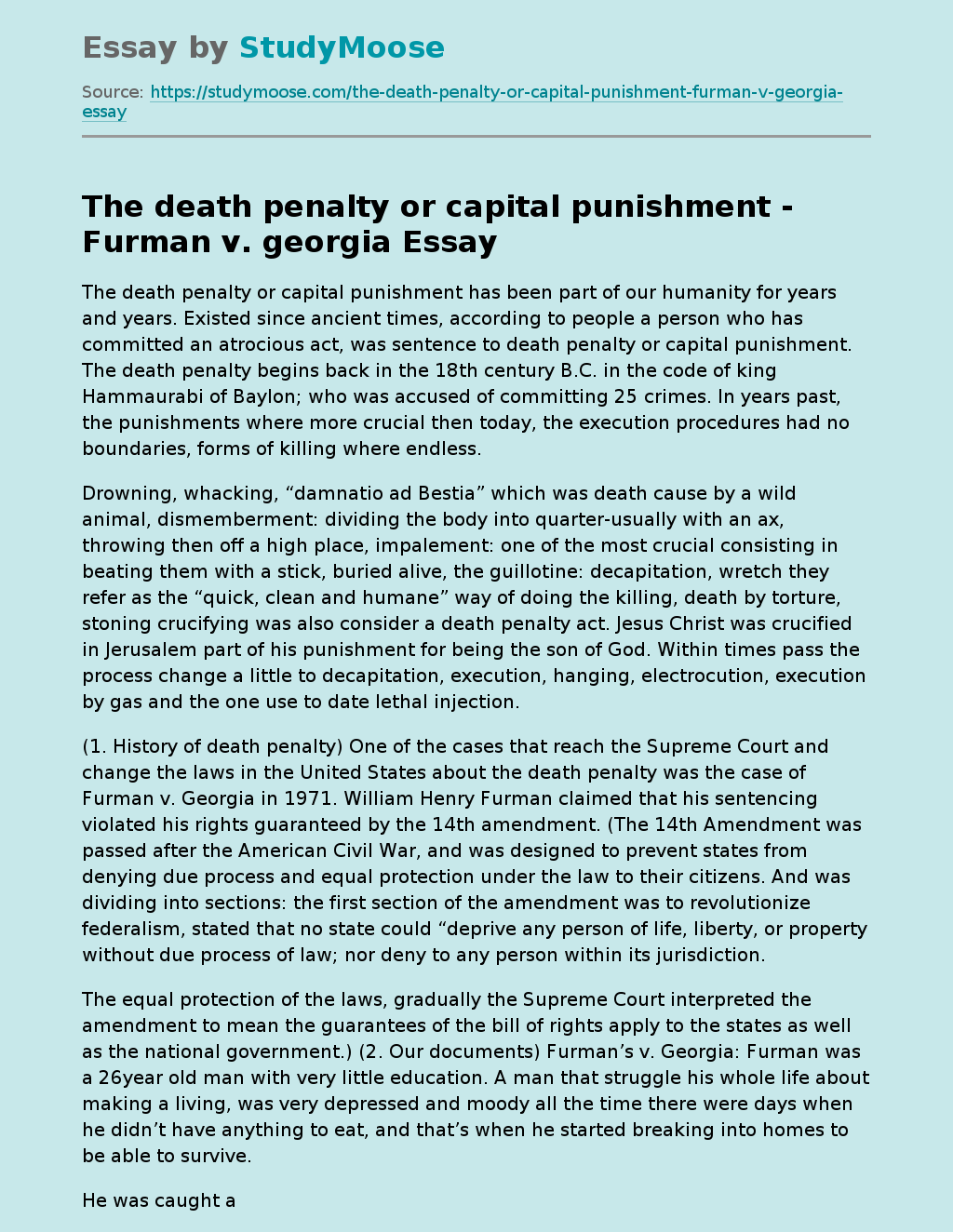