The Crucible- Themes Of Fear, Guilt And Revenge

In life, emotions can act as motivators for courses of action, particularly the feelings of fear, guilt and revenge. Arthur Miller’s play The Crucible shows these themes put to use on a number of occasions. The play’s numerous characters and relationships provide a plethora of examples where the themes are employed. It is through their actions that their emotions and motives are revealed, aiding us in understanding the measures they’ve taken.

Fear can drive people to actions of cowardice and dishonesty.

Don’t waste time
Get a verified writer to help you with The Crucible- Themes Of Fear, Guilt And Revenge
Hire verified writer
$35.80 for a 2-page paper

Mary Warren displays this anxiety when she allows Abigail to frighten her into abandoning John Proctor and accusing him of witchcraft. This leaves him unable to prove the girls’ perjury and at the mercy of the judges who are quick to impose guilt. Reverend Parris also displayed an influence by fear when he urged the judges to condemn the accused and encouraged the accused to confess. He believed that this would help him continue to appear moral in the town during immoral and unjust proceedings.

Should he lose his facade of morality, he would lose his position of power as reverend. Both Mary Warren and Parris threw others in the line of fire when they had the opportunity to help, proving the negative effects fear can have on people’s judgment.

Guilt can pressure a good person to do the right thing, showing the potentially positive effects of an essentially negative sentiment. John Proctor wanted to confess to the charge of witchcraft and live. However, he chose not to confess and tarnish the names of the remaining accused.

He knew the guilt of his confession would be too great a burden to live with. Revered Hale’s guilt of condemning the innocent “witches” to death was his main motivator in advocating Proctor’s inclination to confess. Guilt can apply much strain on the conscience of a person, hopefully with a positive aftermath.

The power of revenge can debilitate and even destroy when orchestrated properly.

Abigail produced the paramount example of revenge at work, and manifested a witch scare in Salem to punish John Proctor for rejecting her advances. Thomas Putnam also struck back at those who denied him, murdering his neighbors as witches and claiming their land. Both Abigail and Putnam share the qualities of overconfidence and deceitfulness so revenge could have been something expected of them both. The effects of their revenge tactics make the pair two of the most atrocious characters.

These compelling themes of fear, guilt and revenge will provoke people to take very extreme courses of action. It is the choices one makes that they are judged on, because your choices are dictated by the person you are. It is even one’s decision whether or not to let emotions cloud your judgement. However, once the choices are made and the outcome is witnessed your strength of character is revealed. Unfortunately it isn’t always the deserving individuals that take the fall. John Proctor realized his best revenge on the guilty would be to abstain from confession and leave them with the fear that people wouldn’t stand for the deaths of the innocent.

The Crucible- Themes Of Fear, Guilt And Revenge. (2016, Jul 12). Retrieved from http://studymoose.com/the-crucible-themes-of-fear-guilt-and-revenge-essay 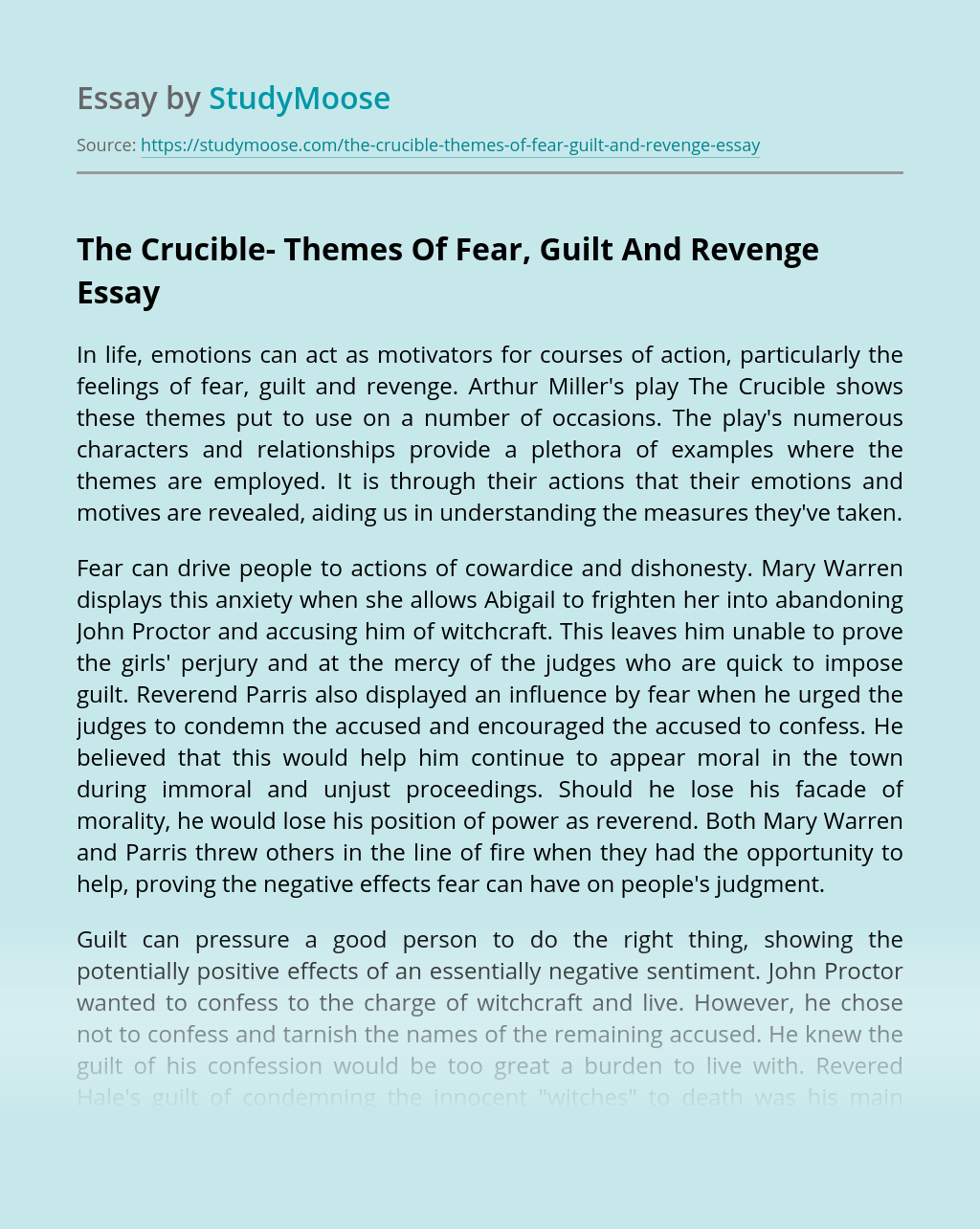 Don’t waste time
Get a verified writer to help you with The Crucible- Themes Of Fear, Guilt And Revenge
Hire verified writer
$35.80 for a 2-page paper
Stay Safe, Stay Original