In many works of literature, the behavior of a character or a group of characters is motivated by emotion. In Chinua Achebe’s Nigerian novel, Things Fall Apart, Okonkwo is motivated by the fear.

Throughout Things Fall Apart, Okonkwo’s actions take place because he is afraid of becoming “A Woman” like his father. Not only does he act masculine to appear manly to the villagers, he does it to satisfy his own conscious. Okonkwo portrays a short temper in this book.

Don't use plagiarized sources. Get your custom essay on
“ Fear in Things Fall Apart by Chinua Achebe ”
Get custom paper
NEW! smart matching with writer

Small things such as his supper being late and remarks about his hunting anger him, and lead to his beating of his wives and his son Nwoya. His desire to appear manly often fogged his judgment. When the time came to kill Ikemefuna, the boy who called him father, he was told by his best friend that he should not take part in this because the boy looked up to him. Okonkwo knew his friend was right.

When he, Ikemefuna and other leaders of the tribe went to the woods to carry out the task, Okonkwo did not want the other men to think that he was weak so he cut down his own son.

Okonkwo’s actions were also motivated by the fear that his whole village would become weak. After returning from his exile in Mbanta, Okonkwo realized that the Christians were taking over. Unlike the rest of his tribe he wanted to go to war with them and drive them out. Soon he realized that during his seven years in exile Umuofia had changed and no longer was feared tribe it used to be.

Okonkwo continued to fight the inevitable. His actions were never able to help his village; his worst fear had come true, they had become weak.

Okonkwo suffers the consequences of his actions being motivated by fear throughout Things Fall Apart. He damages his relationship with his family, and his actions lead to his eventual death. Okonkwo and his son Nwoye could never relate to each other. Both had totally different outlooks. Okonkwo was always trying to appear manly and trying to get Nwoye to appear the same way. These things were not really important to Nwoye, and Okonkwo could not understand why. He often beat his son thinking that it would get him to understand. When the Christians came through and were looking for new people for their church, Nwoye joined. He was just waiting for a good chance to leave his father. Okonkwo was also exiled because of his strong desire to appear masculine.

The gun that inadvertently killed his fellow villagers was defective but he still chose to take it to the council meeting so he would not seem weak. Because he brought a defective gun to the meeting and he accidentally killed a clansman he was exiled for seven years. All of his dreams of becoming the most successful and respected man in Umuofia went up in smoke, because his fear of being seen as “Womanlike” clouded his good judgment. His eventual death was also caused by his fear of becoming like his father. He could not handle the fact that his village had changed during his exile. They had become weak and were no longer willing to go to war. Okonkwo felt that he had rather not live than live like a woman so he hanged himself. Okonkwo was unwilling to accept change which was his eventual downfall.

Finally, Okonkwo’s fear of turning out like his father affects the overall work in three main ways. It leads to the story’s denouement. Okonkwo’s unwillingness to accept change led to his death in the end of the story. He could never have been happy in a society where masculinity was not important. He had rather not live than live in a “Womanish” village. Further, Okonkwo’s fear of being unmasculine affects Things Fall Apart by contributing to the story’s mood. Because of Okonkwo’s short temper and unpredictability the mood of this novel was tense. The reader never knew when he was going to get mad and beat somebody or shoot at them. Finally, and most importantly, Okonkwo’s fear of being weak creates the story’s profoundest theme, “One must adapt to their surroundings.” Because Okonkwo was unable to accept the change of his village it leads to his eventual downfall. Okonkwo could never live in a village full of “Women.” 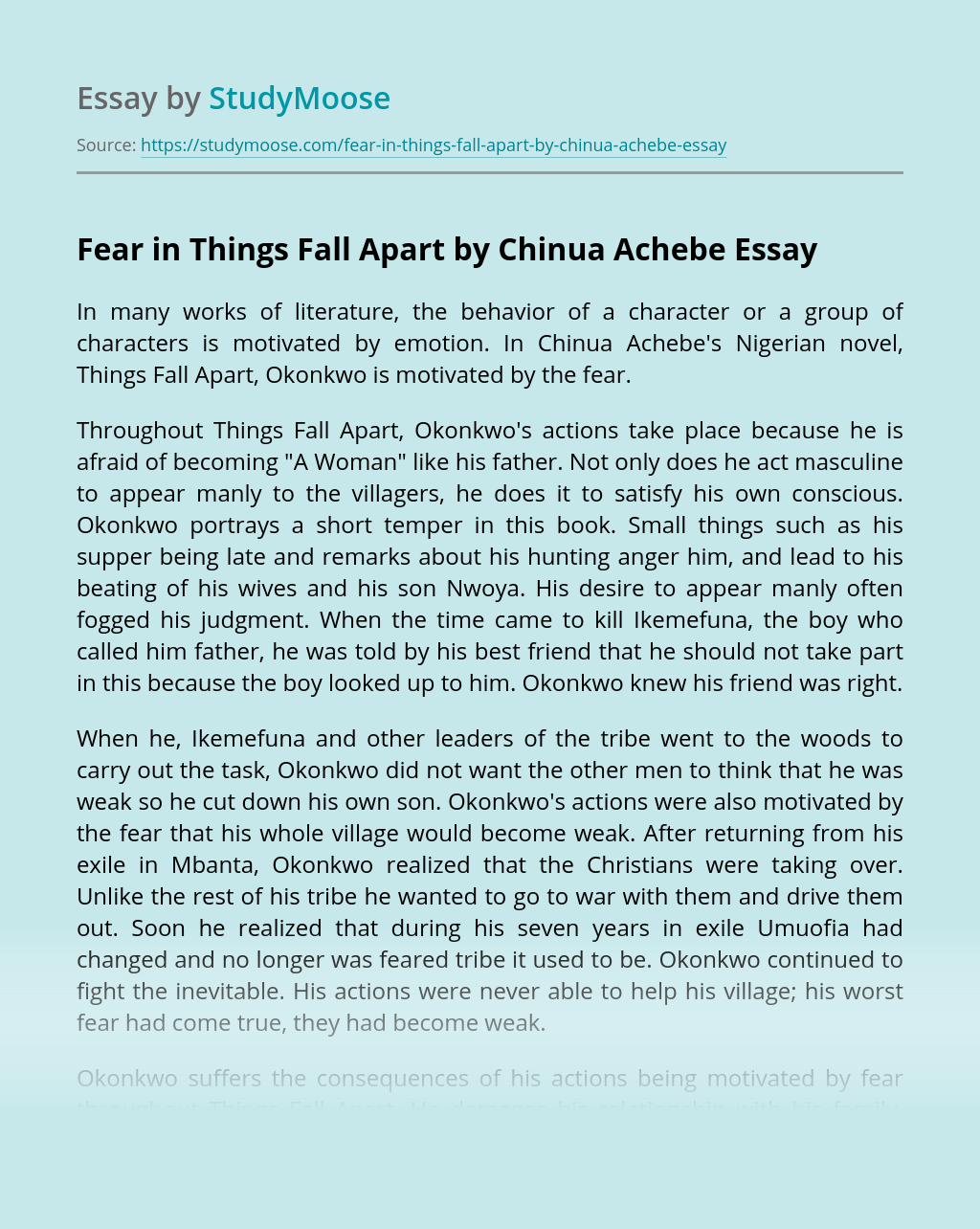