The Concept of Identity in the Novel “Kafka on the shore”

How does Murakami explores the concept of identity in the novel “Kafka on the shore”? It is challenging to convey what defines someone’s identity, who we are, what we do, but most importantly what we think. It’s inside our heads, in our unconsciousness when we actually allow ourselves to ponder on our true identity. When it comes to literature, authors explore their characters´ true selves differently depending on the intention they have. In the novel “Kafka on the shore” Murakami uses several unusual resources in his novel such as themes and intertextuality in order to explore the concept of identity within his writing.

Don't use plagiarized sources. Get your custom essay on
“ The Concept of Identity in the Novel “Kafka on the shore” ”
Get custom paper
NEW! smart matching with writer

The author through the presentation of the relationship between dreams and reality and the concept of destiny linked to the notion of lack of control reveals the true self by inquiring into the inner darkness of the nature of his characters. He explores the unconscious side of an individual, which in his writing has a significant impact on the building of their fate implicitly blurring the boundary of importance between thought and action.

Also acknowledging dreams as the only moment when our human condition allows people to be completely honest with ourselves. The following commentary in order to explore the concept of identity in Murakami’s work will focus on the passage of Miss Saeki’s and Kafka’s intercourse, chapter 29. The conception of dreams vs. reality in the novel plays a major role due to the fact that what the author wants is to make dreams as important as reality or even more so, given that it is when his characters are their true selves.

Therefore this relationship is experienced by his audience very deeply, at first introducing the subject in a way anyone could relate to it but as the novel advances, the theme is developed to a level far beyond everyday life, nevertheless it is possible to get to an understanding of it. The geographical context of Japan in the novel aids this insertion of magical realism to the writing of Murakami. Concerning the cultural and religious aspects, Japanese society has a big flexibility on them, they have a blending of several religions such as Buddhism, Taoism, and Confucianism, boundaries are broken and people are free to live their own interpretation of their spirituality.

Moreover, religion defines Japanese identity more than spirituality; it’s a way of living and thinking. Such freedom and individuality of thought is what enables the events in the novel to be conceivable, what allows the author to distort dreams and reality, and what’s real against what’s possible. Furthermore the inception of that liberal Japanese way of thinking empowers the reader to make a free interpretation of what’s going on in the novel, acknowledging that being involved in the postmodernist movement there is never an absolute truth to it. Murakami plays with the readers’ mind as they are certainly expecting to find absolute answers and end up being more confused trying to seek for them. In the specific extract of Miss Saeki’s and Kafka’s intercourse she is fulfilling her unconscious desire of sleeping with him. In fact the scene itself is presented in a way in which as readers we are not sure whether it is actually happening or not.

The author uses a mesmeric tone and changes the narrative voice to third person to create a dream like atmosphere “Before you know it, her dream has wrapped itself around your mind. Gently, warmly, like amniotic fluid.” In this quote the use of the third person is evidenced and the expression “wrapped around your mind” is what produces the mesmerizing tone as Kafka is clearly absorbed by this dream that has become a part of reality. It’s a very graphic scene in which the main character experiences the blurring of genuineness against his dreams “But you can’t locate the borderline separating dream and reality. Or even the boundary between what’s real and what’s possible. All you’re sure of is that you’re in a delicate position”. In this scene Kafka is unable to control himself even when he knows that what he is doing is not right. Moreover, the fact that Miss Saeki accomplished her subconscious wish during her sleep is reassured when she decides to embrace her desire and repeat the intercourse with Kafka in one of the following chapters.

Another significant way, in which this theme is related to the character of Miss Saeki and her identity revealing through her unconsciousness, is the spiritual projection of her fifteen year old self that Kafka sees at night. It is possible to interpret that she projects herself this way during her sleep due to the fact that she is stuck in her distant, happier past. Revealing that what she truly wishes is to be back when she was 15 and reunite with her lover, which could be why she presents herself to Kafka, given that the resemblance between both could be interpreted as if he weren’t only her son, but the reincarnation of her lover. Then again what allows the reader to make these assumptions is the religious context of japan given that reincarnation is a part of some peoples´ believes. For this particular element of the spiritual projection Murakami uses intertextuality to relate the events in the novel and clarify his perception on the subject. He deliberately makes a reference to the tale of Genjy. In this tale Lady Rojuko fulfils her dark unconscious desires through her dreams by “becoming a spirit” without taking notice of it, just like Miss Saeki does.

The important link between both events is that both characters could only carry out their desires during their sleep while they are their true selves. Miss Saeki is only able to seek the intercourse with Kafka while she is theoretically sleeping. Another parallel with the tale is when Nakata takes the place of Kafka and stabs his own father, eventually carrying unconsciously the course he was meant to. Perhaps this suggests that there is inner darkness in everyone and that dreams are the perfect moment to explore the darkness within our true selves “the world of grotesque is the darkness within us” Regarding the conception of destiny and the theme of lack of control in the novel, these are factors that as well enable the exploration of identity in Murakami’s characters. Fate is perhaps one of the most significant elements of the novel developing throughout all of it. It is essentially presented as inevitable, the author foreshadows from the beginning what’s going to happen with his main character.

The reason why destiny is a factor beyond the individual’s´ control is because the author wants to state it isn’t only an uncontrollable force driving them. It’s an actual part of who they are, an inner force, part of their human condition “Sometimes fate is like a small sandstorm…this storm is you. Something inside of you. So all you can do is give into it”. Therefore indeed destiny is identity, Kafka is omened that he will eventually kill his father and sleep with his mother, but this doesn’t happen due to fatality or chance, it happens because it is unconsciously what he wants and therefore what he is. This is proven when further on in the novel he accepts his curse; he embraces it, his love for his own mother and the death of his father. Nevertheless he doesn’t carry out his curse completely aware that he is doing it, but in thought he actually wishes to do so, which is why it happens. This suggests that thought is indeed as important as actions, or even more so, as they are our pure intentions.

Therefore this could be interpreted as a factor affecting the characters’ karma as Shinto religion suggests and thus having an impact on their destiny. On the other hand, control is presented as something the characters lack, and when it’s linked to destiny therefore to identity what Murakami expresses is that they are not able to control who they are, what they want. This is shown in several ways for example something as simple as sex, Kafka finds himself unable to control his desire of sleeping with unconscious Miss Saeki although he is well aware that he is acting wrong. “I figure I’d better wake her up. She’s making a big mistake, and I have to let her know. This isn’t a dream–it’s real life. But everything’s happening so fast, and I don’t have the strength to resist” In this way the reader can relate to the experience of the main character of not being able to resist what he deeply wants.

To sum up, Kafka on the shore is a novel that is indeed charged with deep and complicated themes, metaphorically exploring several elements about human life and identity. Nevertheless Murakami manages to introduce such complexity in a way that the reader is able to understand and interpret his writing using resources such as intertextuality to clarify his take on the subject, or at least the reader is able to suggest he does. With the use of destiny, control and dreams vs. reality the author makes an interesting approach towards the exploration of identity stating that our thoughts are as much part of who we are as our actions, and even a more important part of our selves. Additionally he gives a vast importance to dreams, as they are the reflection of our minds, our true fears and desires. Perhaps he is stating that life should be much more like a dream, and in a way criticizing the conception of reality.

The Concept of Identity in the Novel “Kafka on the shore”. (2017, Jan 11). Retrieved from https://studymoose.com/the-concept-of-identity-in-the-novel-kafka-on-the-shore-essay 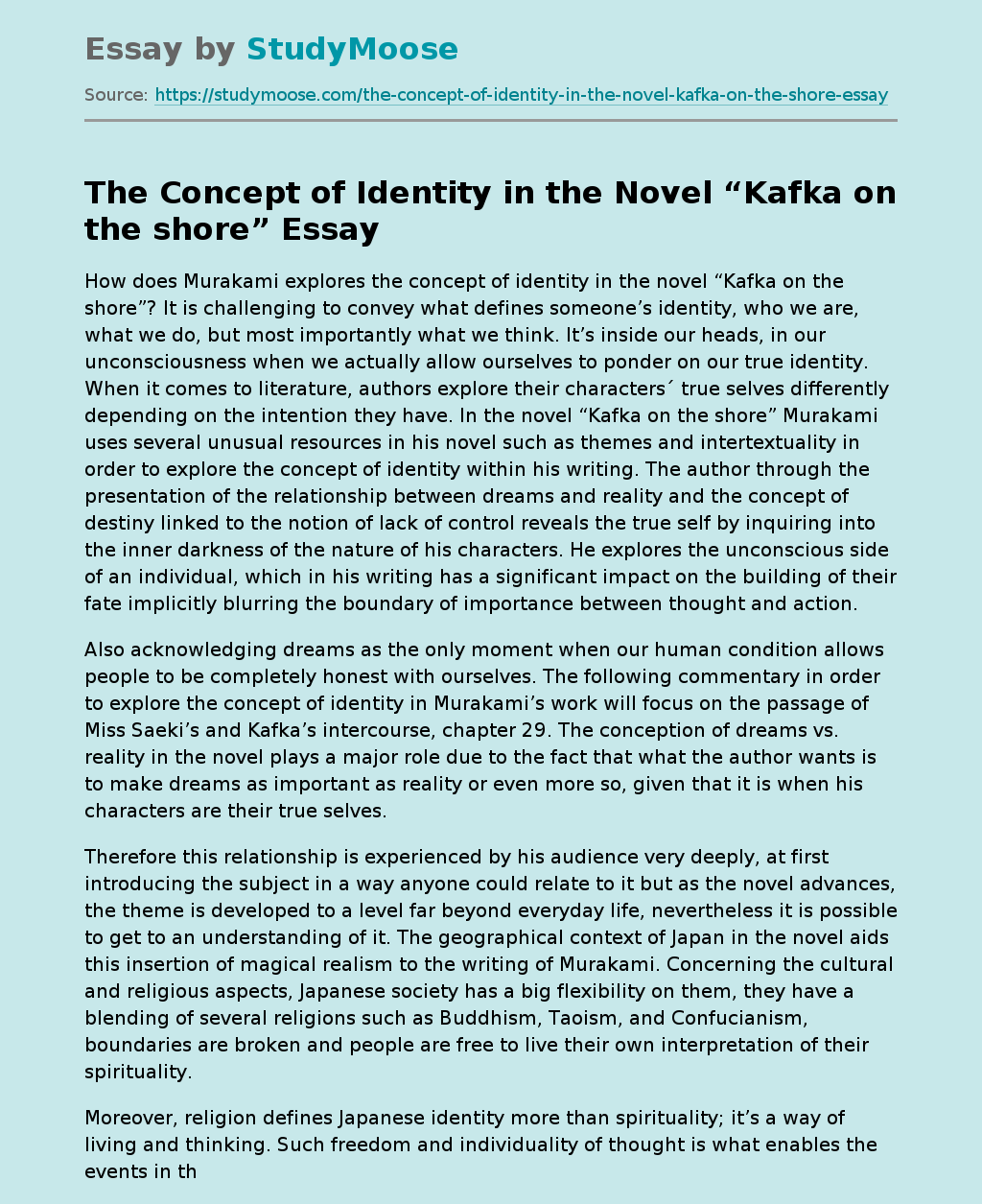