Considered to be one of the most important contemporary writers in modern Japan, Haruki Murakami shot to fame with his novel “Norwegian Wood”, a story about sexuality and loss, which sold 4 million copies in Japan instantly turning him into a Japanese pop culture icon. Although most of his stories are set in modern Japan, his portrayal of everyday things and gritty realities depict most cities of the modern world.

Since his works are heavily influenced by Western culture, with cameos of Marlboro cigarettes and McDonald’s, allusions to western music and values, Murakami is able to bridge the gap between the wild West and the oriental East.

Don't use plagiarized sources. Get your custom essay on
“ A Surrealist Writer ”
Get custom paper
NEW! smart matching with writer

Thus, his works transcends cultures and speaks to a global audience. Some critics have criticized him for being predictable, using almost similar characters and mirroring plots (www. complete-review. com) but he too has been praised for presenting a fresh eye and imagination into contemporary literature.

And what an imagination it is. Upon reading a Muraki novel, one is taken through a bizarre journey of realities, dreams and other dimensions.

Although he grounds his novels in the everyday people that act as his protagonists, his presentation of their experiences are out of the ordinary. He sends his characters into alternate realities, lets them have conversations with ghosts and out of body experiences. If he were not a novelist, Haruki Murakami will surely have equal success as a Surrealist painter.

The Elephant Vanishes into the TV

” Powell’s books. com describes the book as “haunting and hilarious” and an assault on the normal. ” It contains stories ranging from the disappearance of a favorite elephant, a guy seeing the love of his life, losing sleep yet finding freedom, and the intricacies of family relationships. The book is again a perfect blend of Murakami’s style of reality and disambiguity, tackling such issues as love, independence and dependence.

From all the stories found in “The Elephant Vanishes”, TV People stands out in its style and presentation. TV people is a story of a man who one day receives a TV delivered to his apartment. What fascinated the man was not the TV he received but the the people who delivered it. Referred to as the “TV people”, they are described as slightly smaller than the average man, who silently works setting up the man’s TV. The man is intrigued as to who and what these people are, especially since he did not even buy the television.

However, he is even more puzzled by the fact that these TV people did not seem to see him and acknowledge his presence. However, he again sees the TV people at work and this was where things started to turn bizarre. Every time the man would ask his officemates about the TV people, the officemates would just ignore him, much like the way the TV people ignored him. This sets him on a journey of self critique, questioning his own identity and ultimately his own existence.

It is a fascinating read as it has the tone of a suspense movie, with all the questions hanging in the air as the TV people intrude upon the life of the protagonist. What is great about the story is that it does not only tell a tale of a man questioning his own existence but it also presents the reader something to chew and ponder upon. The theme of existing or non-existing through the acknowledgement of others is very thought provoking especially in a modern society where identities and lives are created through the attention of other people.

Another interesting thing to note is that the introduction of the TV into the protagonist’s life led to his journey of self-critique. Some reviews o fthe story revealed that Haruki Murakami actually wrote TV People as a critique on a technology saturated society. Much like how the TV impacted the life of the protagonist, the fast paced development and assimilation of technology in human lives has altered man and his values. People now live in a world where the media and technology dictate what is right and what is wrong, who is important and who is not, who exists and who doesn’t.

Especially in Japan where the rapid development of Information and Communication technologies have resulted in a fast paced and highly competitive society, a “lost generation” has emerged in their society. Youths who live like hermits in their own houses that they became so detached from reality. Much like the TV people who shunned the outside world while they go on their way. This story attempts to wake society from its dependence on technology. Entertaining in its suspense but intelligent in its presentation, TV people is vintage Murakami. It presents ordinary settings, ordinary things, made extraordinary by the stories that they lead. 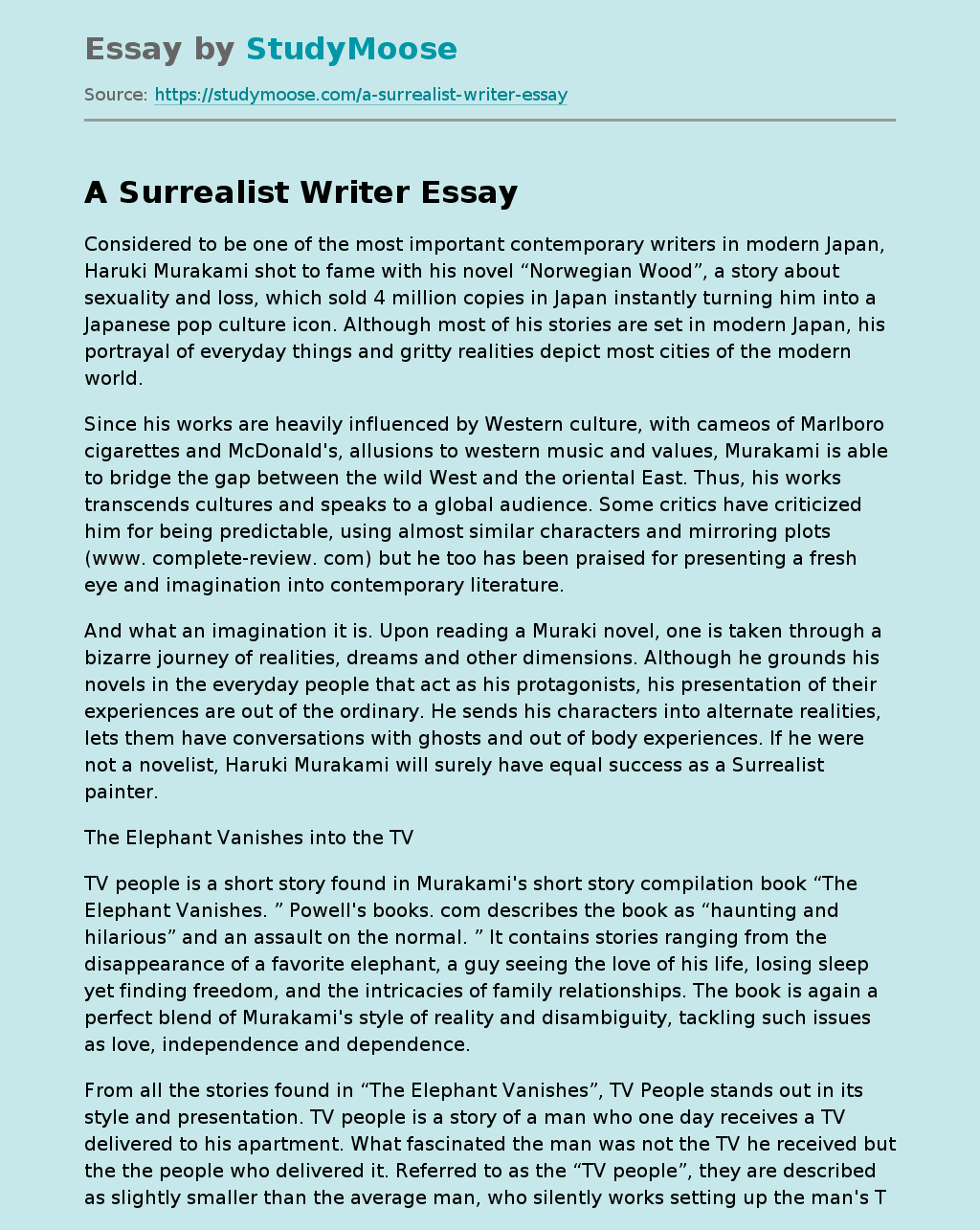