Since the late nineteenth century Coca Cola has been a successful company. Coco-Cola went to war with its competitor PepsiCo throughout the 1990s as Coca-Cola expanded its market overseas. Its overseas sales increased to the point where over 85 percent of its sales came from outside of the United States (Ferrell, Fraedrich and Ferrell, 2011).

Don't use plagiarized sources. Get your custom essay on
“ The Coca-Cola Company Struggles with Ethical Crises ”
Get custom paper
NEW! smart matching with writer

As a consequence, the Coca-Cola brand and trademark is the most recognized in the world and worth an estimated $25 billion.

Yet, by 2000 Coca-Cola failed to make Fortune’s list of most admired American companies because in part of its serious ethics violations like charges of racial discrimination, contractual disputes with distributors, problems with long-term contracts and that Coca-Cola misrepresented market tests (Ferrell, Fraedrich and Ferrell, 2011). This paper will examine the ethical issues Coca-Cola encountered to argue that its response to the crisis was handled well but nonetheless deeply affected the company’s bottom line.

Since the late 1990s, Coca-Cola has been embroiled in at least eight significant ethical dilemmas.

The first came in June 1999 when Coca-Cola’s products were contaminated. Consumers in Belgium, the Netherlands and Luxembourg became sick after using Coca-Cola products. Coca-Cola mismanaged the problem and downplayed it. Then over 100 people became sick in France and months later in Poland with water contaminated with mold. In each of these events, Coca-Cola did not react in a timely fashion or with the appropriate concern for public health, but eventually conceded that it was their contamination problem. The second issue regarded Coca Cola’s unethical marketing behavior in Europe.

In 1999, it culminated in a full investigation by the European Commission and right after came charges of racial discrimination in the United States. Two thousand mostly African American current and former employees alleged that they were at the low end of the pay scale; management knew about it since 1995 and never intervened. Coca Cola denied it, but still settled and paid up to end the suit.

The fourth ethical dilemma involved the Burger King Test Market. In 2002 the company wanted to introduce a new children’s snack to be sold through Burger King, which was cautious about the new product and ordered a test market. When the reports came back with slow sales, Coco Cola, according to a mid-level manager who blew the whistle because he was the victim of retaliation for revealing the fraud, paid a customer $10,000 to bring 100s of kids to the restaurant to increase the sales.

After an investigation, the company had to pay out damages to the whistle blower and Burger King. According to Ferrell, Fraedrich and Ferrell (2011) Coca Cola was also accused of channel stuffing, a practice of “shipping extra inventory to wholesalers and retailers at an excessive rate”. In 2004, the SEC confirmed that Coca Cola had overblown financial statements the result of sending extra concentrate to Japan between 1997 and 1999. To settle with the SEC the company had to create an ethics and compliance office and verify its finances every quarter, and reduce its international stock of concentrate.

The troubles continued well into the 2000s. In 2006 Coca Cola changed its distribution structure of direct-store delivery, instead it started to use a subsidiary and deliver to warehouses. The bottlers thought that the new system would violate antitrust laws but Coca Cola went ahead with it. The problems were reported widely in the media, however, and the company’s reputation as well as those companies it dealt with suffered. The last two ethical dilemmas related to union relations and trade secrets. In Colombia, Coca Cola engaged in union busting but intimidating workers and causing deaths of organizing workers. In 2006 employees were arrested and charged with stealing trade secrets and not protecting Coca Cola’s intellectual property, which is a breach of confidence and an ethical issue. Significant ethical dilemmas

Ferrell, Fraedrich and Ferrell (2011) argue that, “the company’s less-than-stellar handling of the ethical crises has introduced a lack of integrity in its partnerships.” All of Coca Cola’s partners will assume more risk because of their relationship to Coca Cola and its partners “requires a diplomatic and considerate view of the business and its effects on various stakeholders” (Ferrell, Fraedrich and Ferrell 2011). So the ethical crises harmed the partnerships, their stakeholders and ultimately the profits.

The most significant ethical dilemma faced by Coca Cola, however, was its problem with the distributors because it is not just a public image problem, which Coca Cola seems to have weathered quite well. Rather, this was a problem with its stakeholders. The distributors, who believed that Coca Cola and CCE were attempting to set up a system that passed over the distributors, destroyed their confidence in Coca Cola, which is likely to be less responsive to Coca Cola’s public campaigns of social responsibility and concern over the environment and thus tougher to win back. Morsey (2011) argues that while external shareholders, in this case the distributors, might have shared concerns with Coca Cola, “it does not necessarily make them less critical [Corporate Social Responsibility] CSR initiatives or cause their norms to converge with the corporate norms”. This was certainly the case with the distributors. Recommendations for prevention

Coca Cola experienced problems in the foreign market because they did not abide by foreign laws and were accused of toying with the European market, for example. Coca Cola’s cooperation with international officials showed their commitment to repair business relations and take responsibility for their manufacturing process. In turn, their brand recognition allowed them to make good with consumers who were not too deeply affected by their ethical lapses.

However, where was the human resources department, which should have protected whistle blowers and instilled ethical business practices into Coca Cola employees and prevented widespread discriminatory labor practices? Clearly, according to Mackavey (2006) senior management sets the rules. But they were unable to lead the company. There was a large turnover at the top so clearly stable upper level management is a way to ensure that ethical lapses do not reoccur. Coca Cola’s response to the crisis

The company’s response to the crisis was to deal with its ethical crises in some cases head on but also to bring back its reputation by emphasizing its quality products and socially responsible practices (Ferrell, Fraedrich and Ferrell 2011). Moreover, in each case it seems that Coca Cola worked well with investigators, settled cases and tried to implement systems that would prevent their reoccurrence. Coca Cola also sought to improve relations with labor by instituting changes to hiring and oversight practices that reinforced their image as an ethical business. Their outreach to minority communities was effective but from a human resources perspective likely changed little over the long-term. In the end, Coca Cola’s long-time reputation pulled it out of the crises although not enough to erode PepsiCo’s market share. 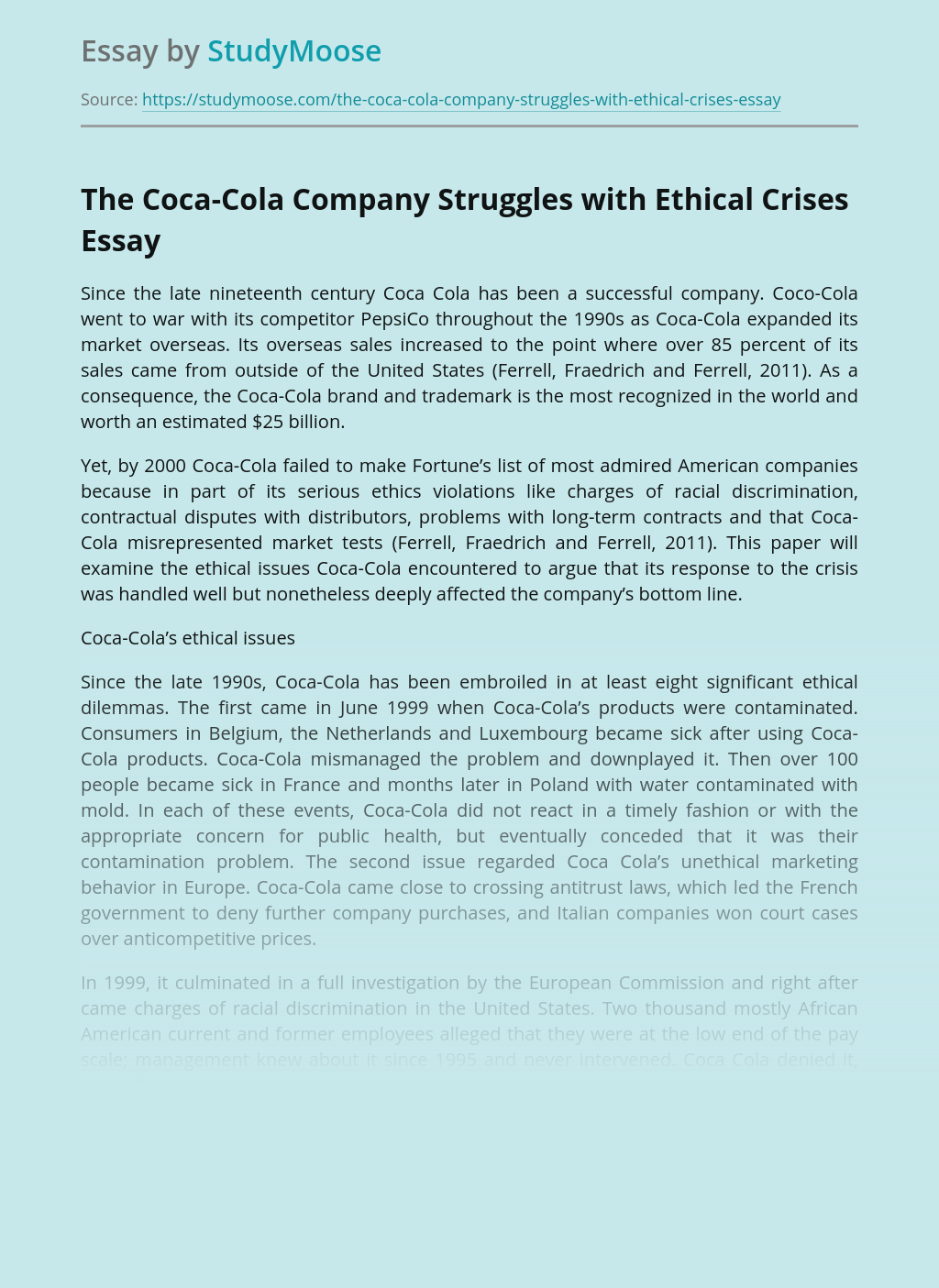