The claim that the soul is distinct from the body Essay

2. Evaluate the claim that the soul is distinct from the body.

There are many different views that the soul is distinct from the body of which appose this claim but at the same time there are those who agree with it.

Don't use plagiarized sources.
Get Your Custom Essay on The claim that the soul is distinct from the body Just from $13,9/Page

Plato said that the body and its senses cannot be a reliable guide to the truth as it did not pre – exist in his idea of “the world of forms” and so the body can only seek truth from experience which in reality would not be the “real truth”. Plato also believed that the soul enables us to have knowledge as it pre-existed before birth in the world of forms.

This is said to be the reason why we can understand things such as beauty in the world as the soul had already experienced them prior to our existence.

Another reason Plato believed the soul is distinct is the idea that the body distracts us from purpose. The soul gives us the ability to reason where as the body has to be guided by the soul in order to make rational decisions. As well as this he believed that the soul cannot be split into parts not can it change as it is external, unlike the body.

However philosophers such as Aristotle (a pupil of Plato’s) argue that the body and soul are dependant of each other and that one cannot survive without the other. Aristotle believed the soul is the form, like the characteristics of a sculpture. He talks about how the soul is merely description of the essence or properties of the body. It is our human personality and abilities. Aristotle believed that the soul was inseparable to the body and that it cannot be divided. The soul is said to be essential to us, we are body and soul. Aristotle used the example of an axe to emphasise this (if the body was an axe, the soul would be its ability to chop. If the body was an eye, the soul would be it’s ability to see). Therefore no soul can be present without the body as the soul gives the body its structure and function; this means it is necessary for them to exist as one. Once the body dies the soul must die as they are dependant of each other.

A current day philosopher name Richard Dawkins completely discredited that the soul even exists. He believed that there is no non-physical part of a person and that nothing exists apart from matter. Dawkins believed that some people would argue that consciousness was the soul, however he argued that consciousness was just a physical phenomena so there cannot be a soul. This is due to the idea that everything is physical which means conciseness cannot be separated from the brain. The reason that we have self awareness is due to our bodies being ‘survival machines’ and so it would be seen as an evolutionary advantage to develop this self awareness.

Overall it would seem that the idea that our soul is separate to the body would seem illogical. This is because the argument that consciousness and self awareness along with the idea that our bodies are physical phenomenons as a whole which is not separate seems to make more logical sense. Through the development of science we can see more and more commonly cases where evolution disproves the idea of any external factors being the motions behind our bodies. Consciousness and self awareness can be seen to be no more than electro chemicals within the brain and that it is simply an evolutionary advantage. This means everything must just be matter and the soul is a human fantasy brought about by the fear of death, coming to the conclusion that once the body dies consciousness dies i.e. the soul.

The claim that the soul is distinct from the body. (2016, May 05). Retrieved from https://studymoose.com/the-claim-that-the-soul-is-distinct-from-the-body-essay 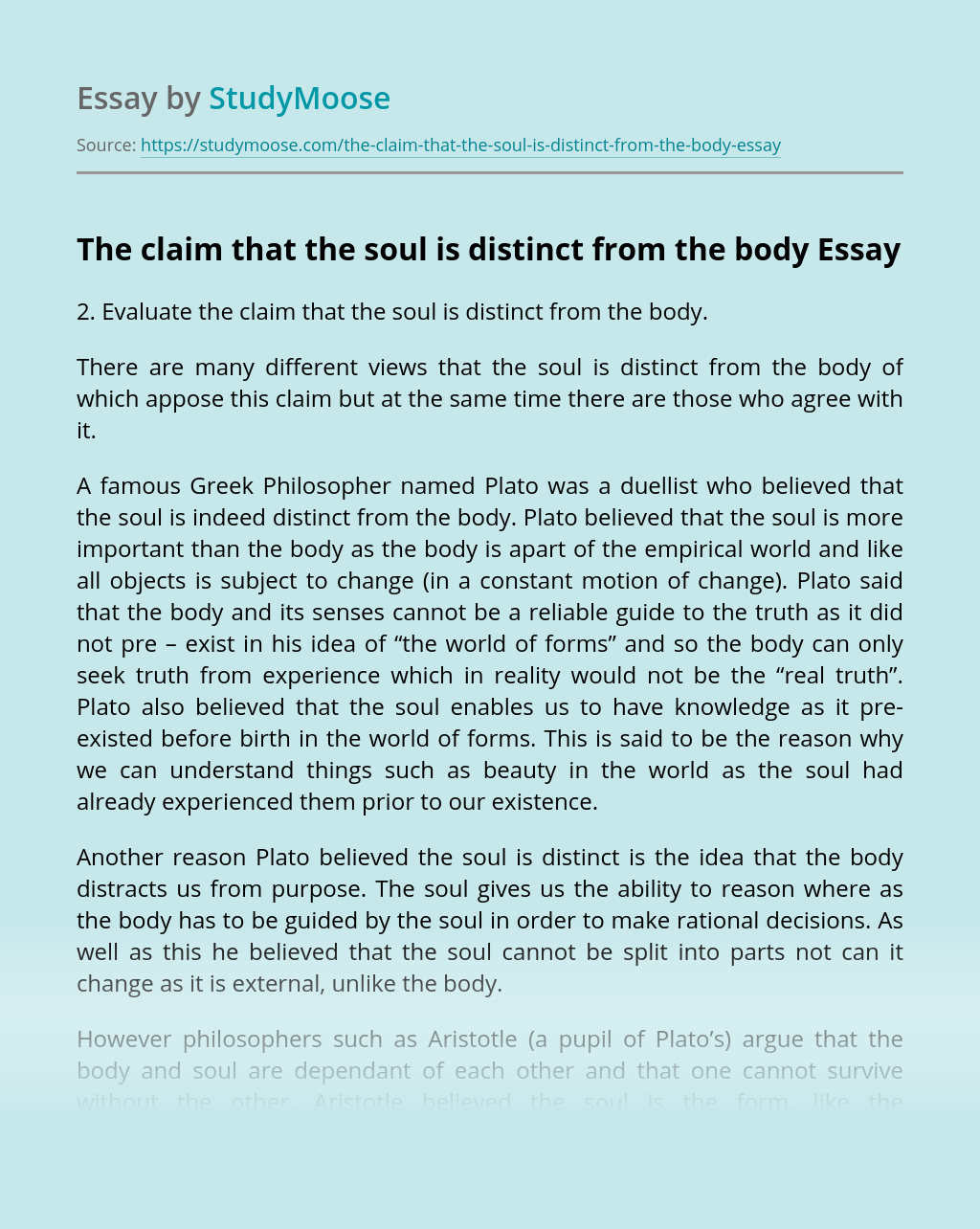 Percy Busshe Shelleys Hymn to Intellectual Beauty is a good example of a Romantic poem, because it is specific in focusing in on the Romantic genre of poetry that elevates the common mans experience to the sublime. (6) The relevance produced by this poetry, whether it is an abundance of emotion expressed by Wordsworth, a... VIEW ESSAY

Building service is one of the important parts for a building because it will make a building to function well. Building service is responsible for the design, installation, and operation and monitoring of the mechanical, electrical and public health systems required for the safe, comfortable and environmentally friendly operation of modern buildings. Modern technology of... VIEW ESSAY

Vincent Can Gogh painted The Red Vineyard in 1888, some time after Paul Gauguin arrived in Arles,France. Paul Gauguin was the artist that Van Gogh looked up to most. Van Gogh wanted to be just like Gauguin and become famous for his artwork. As the weeks passed, Gauguin moved his easel out into the fields... VIEW ESSAY

View sample
Lord of the Flies (Men are inherently evil)

“Man produces evil as a bee produces honey” was a remark that was made by William Golding after his experience serving in the second world war. Lord of the Flies is a symbolic novel of his experience and this quote was his way of showing that all men were evil; it was as natural for... VIEW ESSAY