The Chocolate War: To Ban or To Not Be Banned

In Robert Cormier’s The Chocolate War, the story itself may be considered a little controversial. Although the storyline is interesting and many people had their eyes glued to the page, others believe that some parts in the book are too controversial that it should be banned in schools. I personally believe that even though The Chocolate War was an interesting book to read, it should be banned from schools.

While reading The Chocolate War, I noticed that the way Cormier depicts the females’ roles in this book was a little sexist.

Don't use plagiarized sources. Get your custom essay on
“ The Chocolate War: To Ban or To Not Be Banned ”
Get custom paper
NEW! smart matching with writer

Discrimination against genders is an arguable topic. When Archie thinks by himself waiting for Obie, he realizes that he’s been so busy with his work that he “doesn’t seem to have any time to himself anymore, not even time for girls” and he thinks back to the days when “you could let your eyes devour some luscious sights and usually talk one of [the girls] into the car, for a ride home” and usually stop once in awhile for some detours.

In my opinion, Archie treats girls just as eye-candy. He doesn’t care about their personality or their well-being but only their physical appearance. While Jerry was lying down trying to fall asleep, he laid their thinking about the girl and the way “her sweater had bulged beautifully, her schoolbooks pressed against her rounded breasts” and he only wished for the books to be his hands. All Jerry was thinking about was his longing to touch the girl’s breasts.

Instead of thinking about what truly makes her beautiful, he laid there in bed thinking of her breasts and nothing else. Girls in this book are just thought of as something pretty to look at.

Another disputable topic is the way religion is portrayed in the book. Trinity High School is an all boys Catholic school, but the students are very sacrilegious. When Obie and Archie are working on assignments to give to people, Obie swears and Archie acts like he cares but he later admits that “when you march down to the rail, you’re receiving The Body [but he is] just chewing a wafer they buy by the pound in Worcester (9)”. Archie isn’t serious about his religion. He just does what he has to do but doesn’t really believe in any of it. During that same conversation between Obie and Archie, Archie also reveals his beliefs about the role of Jesus when he doesn’t refer to Jesus as his leader but as “a guy who walked the earth for thirty-three years like any other guy but caught the imagination of some PR cats (10)”. This also shows that Archie has no respect for Jesus even though he calls himself a Catholic. He speaks as if he isn’t religious at all.

Defiance is also seen numerous times during the book. Usually, schools have the standard hierarchy of teachers being in charge of students, but at Trinity, the students seem to have more power over the teachers. Brother Leon asked Archie to help with the chocolate sales because “[he] has influence” on the students and Archie agreed that the Vigils will help him even though the Vigils was supposed to be a secret organization and teachers try to ignore the existence of it, but Archie thought “it was beautiful to use [those words and] to see the surprise on Leon’s pale perspiring face (27)”. It shows that Archie likes to toy with those who are supposed to be above him.

Although Brother Leon has superiority over Archie, Archie still ends up turning the tables and leaves Leon as the one to sweat. During Jerry’s fight with Emile, Brother Leon was watching it from a distance and when Brother Jacques was going to put the blame on Archie, Leon came to his rescue because Archie knew that “if [Leon] was here and part of the proceedings, he’d also be protection for [them] if anything went wrong (211)”. Leon doesn’t have a good sense of judgment because he allows Archie and The Vigils to walk all over him. Archie and The Vigils abuse the fact that the teachers at Trinity, especially Brother Leon, are pushovers.

One final debatable topic in the book is the violent and contemptuous acts that are being portrayed in the book. The students at Trinity are so disrespectful towards one another and they think the only solution to their problems is to argue and fight. During the time that Archie encountered Emile in an awkward situation, Archie blackmailed him with a picture because “the photograph also could be used as a weapon”, but little did Emile know that Archie was lying about taking a picture (85). Archie seems like he wants to aggravate Emile just because he thinks it’s funny.

It’s events like these where young boys start to have problems with each other which can later on lead to confrontation. Emile also provoked Jerry in a situation where he was calling him a queer and accusing him of “living in the closet, hiding away” because he wanted to pick a fight with him (171). Emile’s the type of person with a violent nature because this fight between him and Jerry was unfair and Jerry was provoked. Emile just enjoys the pain that he inflicts on others because he finds the misery of other people somewhat amusing.

Other arguments about Cormier’s novel The Chocolate War are that it shouldn’t be banned because not all readers are immature. My reason for believing that The Chocolate War should be banned from schools is because young readers might not be able to handle the mature content in the book like how adult readers can. If this book is available to young readers at their school library, they might not be able to fully understand what’s going on in the story without having problems with the violence or sexual content. It’s important to realize that there are twice as many immature young readers as there are mature ones.

I feel very strongly about my reasons on why The Chocolate War should be banned from schools. This book is very sexist towards females because even though girls were hardly mentioned, every time they were, it was about their physical appearance and how the boys react to it. There were also some students who didn’t have as much faith in their religion as they should have and spoke of blasphemy. The teachers also didn’t know their place because they were never in charge of the students because the students always overpowered them.

And lastly, the students didn’t have respect to not only the teachers, but also the students because they took each other for granted and fought and argued with each other over things that shouldn’t really matter. These are the reasons why this book should be banned from schools and kept away from those young readers who don’t know how to deal with topics outside of their comfort zone.

The Chocolate War: To Ban or To Not Be Banned. (2016, Oct 11). Retrieved from https://studymoose.com/the-chocolate-war-to-ban-or-to-not-be-banned-essay 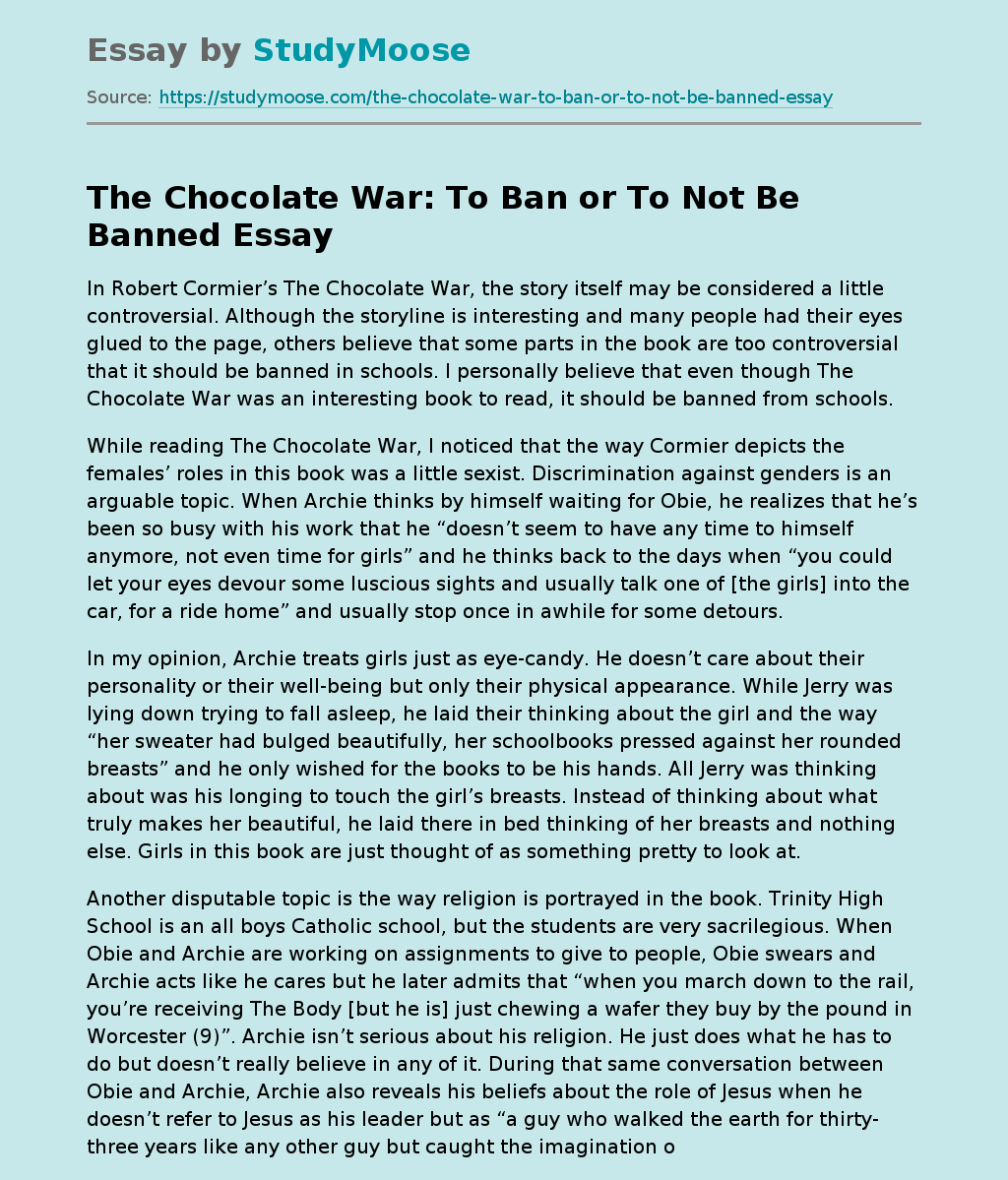