The Benefits of Learning English

Many people think that it is not important to learn any foreign language,but who speaks another language can be able to broaden his knowledge. In Saudi Arabia students in government schools start learning English in the sixth grade and it is not concentrated learning because of the limitation of the classes and the books is not well developed.

English is an international language that most people are using it. The well developed countries such as United States of America, Britain, Canada and Australia speak English as their first language.

” Over 300 million people speak English as their first language. Estimates about second speakers of English vary greatly between 150 million and 1.5 billion”¹. As a result, English let people from different countries communicate with each other. Moreover, it is an old language. It was spoken in the 5th century (Daniel M .Short, 2003).

English is today’s language, in particular it is the language of computer and everybody knows computer’s importance those days.

Furthermore, it is the main language for many subjects such as medicine. In Saudi Arabia medicine is taught in English and that makes it easy for students to complete their higher education in foreign countries similar to U.S.A, Canada or Britain. But some Arabic countries such as Syria teach medicine in Arabic then the students find it difficult to complete their higher education in foreign countries. For that reason, the country will not improve in medicine. In addition, some high school students prefer to complete their study after they graduate outside to get a good job in the future and to get more knowledge but the obstacle that they meet is the TOEFL (Test of English as a Foreign Language).

They maybe waste over one year to get an accepted grade to pass the TOEFL because they didn’t learn concentrated English. .” Some studies have found that students who learn foreign languages score statistically higher on standardized college entrance exams than those who do not”² and that really happen in Prince Sultan University in Saudi Arabia. There are big differences in scores between the girls who speak good English and the girls who do not.

In world of business, English is used as the main language of communication between different countries and international congresses. Nowadays, any company or bank prefers to employ people with English language capability. In addition, banks use English at least in international money transfer.” Ultimately, knowing a second language can also give people a competitive advantage in the work force by opening up additional job opportunities (Villano, 1996)”³. In travel English also used in booking such as in hotels or in airways.

There are many products and newspapers use English as their main language. For instance, Microsoft and Macintosh software use English in their programs as the main language. Besides, the most popular newspaper sites areThe Times, the New York Times, the Globe and Mail, and Washington Post. In addition, English movies, English programs and English series are the most famous in the world.

In conclusion, it is very important to learn a second language especially English. It gives many benefits such as in social or in business. And that doesn’t mean that Arabic is not important. Arabic is the language of the holy Quraan and every Muslim must know it. There is a saying says ‘what is learnt young is hard to lose’. As a result, learning English in Saudi Arabia must begin from kinder garden and must be focused on it.

The Benefits of Learning English. (2016, Jul 04). Retrieved from http://studymoose.com/the-benefits-of-learning-english-essay 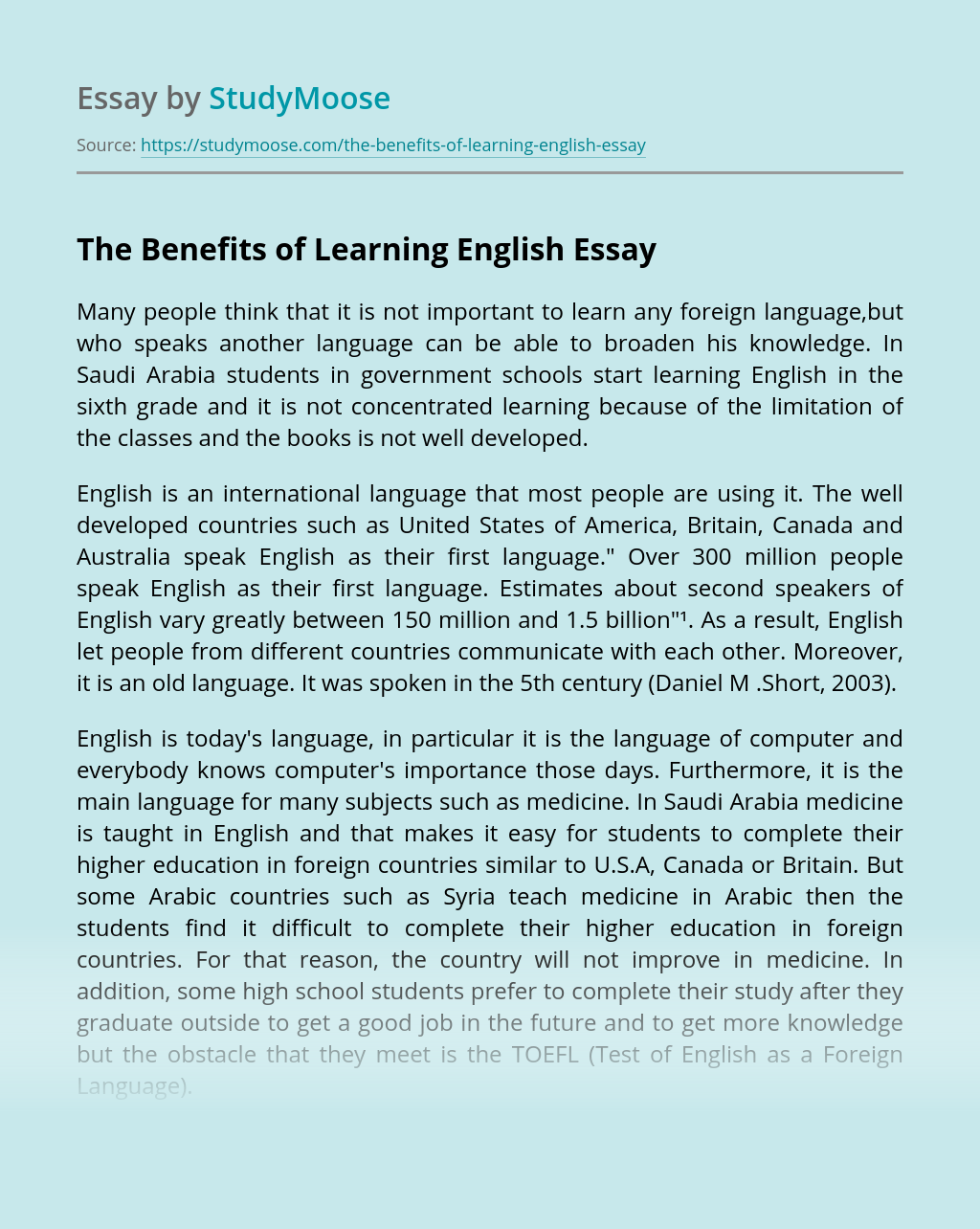 Don’t waste time
Get a verified writer to help you with The Benefits of Learning English
Hire verified writer
$35.80 for a 2-page paper
Stay Safe, Stay Original