The basic features of Elizabethan Poetry

During the Elizabethan age England felt the complete effect of the Renaissance. There occurred a revival of the old and classical literature of Greece and Rome and this was manifested in the poetry of the age. The Elizabethan age was characterized by an extreme spirit of adventure, aestheticism and materialism which became the characteristic features of Elizabethan poetry. Many poets displayed their skill in versification during this time and England came to be called `The Nest Of Singing Birds. ‘ Several general characteristics of Elizabethan Poetry and literature were

1. The period has the great variety of almost unlimited creative force; it includes works of many kinds in both verse and prose, and ranges in spirit from the loftiest Platonic idealism or the most delightful romance to the level of very repulsive realism. 2. It was mainly dominated, however, by the spirit of romance. 3. It was full also of the spirit of dramatic action, as befitted an age whose restless enterprise was eagerly extending itself to every quarter of the globe.

4. In style it often exhibits romantic luxuriance, which sometimes takes the form of elaborate affectations of which the favorite ‘conceit’ is only the most apparent. . It was in part a period of experimentation, when the proper material and limits of literary forms were being determined, oftentimes by means of false starts and grandiose failures. 6. It continued to be largely influenced by the literature of Italy, and to a less degree by those of France and Spain. 7. The literary spirit was all-pervasive, and the authors were men (not yet women) of almost every class, from distinguished courtiers, like Raleigh and Sidney, to the company of hack writers, who starved in garrets and hung about the outskirts of the bustling taverns.

The Elizabethan period (1558 to 1603) in poetry is characterized by a number of frequently overlapping developments. The introduction and adaptation of themes, models and verse forms from other European traditions and classical literature, the Elizabethan song tradition, the emergence of a courtly poetry often centered around the figure of the monarch and the growth of a verse-based drama are among the most important of these developments. Elizabethan poems often contained iamb, a metrical foot of two syllables, one short (or unstressed) and one long (or stressed). Shakespeare used a lot of iambs in his plays.

The iamb is the reverse of the trochee. Also, Iambic pentamer, a type of meter in poetry, in which there are five iambs to a line ( the prefix “penta-” means five, as in pentagon, a geometrical figure with five sides. Metre refers to a rhythmic units. In a line of iambic pentameter, there are five rhythmic units that are iambs. ) Shakespeare’s plays were written mostly in iambic pentameter, which is the most common type of meter in English poetry. An example of an iambic pentameter line from Shakespeare’s Romeo and Juliet is ” But soft! / What light/through yon/der win/dow breaks? ”

A new poetic form seems to have inspired the flowering of English lyric poetry in subsequent decades, reaching its peak during the reign of Elizabeth I. The qualities which especially distinguish the Elizabethan poetry especially lyrics are fluency, sweetness, melody, and an enthusiastic joy in life, all spontaneous, direct, and exquisite. There are songs of delight in Nature; a multitude of love poems of all moods; many pastorals, in which, generally, the pastoral conventions sit lightly on the genuine poetical feeling; occasional patriotic outbursts; and some reflective and religious poems.

During the Elizabethan period the sonnet often appeared as part of a sequence of love poems. The sonnet, along with other Italian forms, was introduced to England in the sixteenth century by Sir Thomas Wyatt. Some The Petrarchan takes its name from the 13th century Italian poet Petrarch. The Petrarchan sonnet consists of two stanzas: an octave of eight lines with the rime scheme ABBAABBA and a sestet of six lines with a varied rime scheme CDE. William Shakespeare was the greatest practitioner of the sonnets; therefore, the English sonnet is commonly called the Shakespearean sonnet.

The Shakespearean sonnet consists of three quatrains (four-line stanzas), rhyming abab cdcd efef, and a couplet (a two-line stanza), rhyming gg. Because each new stanza introduces a new set of rhyming sounds, the Shakespearean sonnet is well-suited to English, which is less richly endowed than Italian with rhyming words. Therefore, the best-known lyric is the sonnet, which may be in the Petrarchan or Italian form, Elizabethan or Shakespearean or English form. Courtly Poetry With the consolidation of Elizabeth’s power, a genuine court sympathetic to oetry and the arts in general emerged.

This encouraged the emergence of a poetry aimed at, and often set in, an idealized version of the courtly world. Among the best known examples of this are Edmund Spenser’s The Faerie Queene, which is effectively an extended hymn of praise to the queen, and Philip Sidney’s Arcadia. This courtly trend can also be seen in Spenser’s Shepherdess’s Calender. This poem marks the introduction into an English context of the classical pastoral, a mode of poetry that assumes an aristocratic audience with a certain kind of attitude to the land and peasants.

The explorations of love found in the sonnets of William Shakespeare and the poetry of Walter Raleigh and others also implies a courtly hard Tottel’s 1557 Songs and Sonnets or in songbooks that included printed music to enable performance. These performances formed an integral part of both public and private entertainment. By the end of the 16th century, a new generation of composers, including John Dowland, William Byrd, Orlando Gibbons, Thomas Weelkes and Thomas Morley were helping to bring the art of Elizabethan song to an extremely high musical level.

Elizabethan Song A wide range of Elizabethan poets wrote songs, including Nicholas Grimald, Thomas Nashe and Robert Southwell. There are also a large number of extant anonymous songs from the period. Perhaps the greatest of all the songwriters was Thomas Campion. Campion is also notable because of his experiments with metres based on counting syllables rather than stresses. These quantitative metres were based on classical models and should be viewed as part of the wider Renaissance revival of Greek and Roman artistic methods.

The songs were generally printed either in miscellanies or anthologies such as Richard Tottel’s 1557 Songs and Sonnets or in songbooks that included printed music to enable performance. These performances formed an integral part of both public and private entertainment. By the end of the 16th century, a new generation of composers, including John Dowland, William Byrd, Orlando Gibbons, Thomas Weelkes and Thomas Morley were helping to bring the art of Elizabethan song to an extremely high musical level.

The basic features of Elizabethan Poetry. (2017, Feb 23). Retrieved from http://studymoose.com/the-basic-features-of-elizabethan-poetry-essay 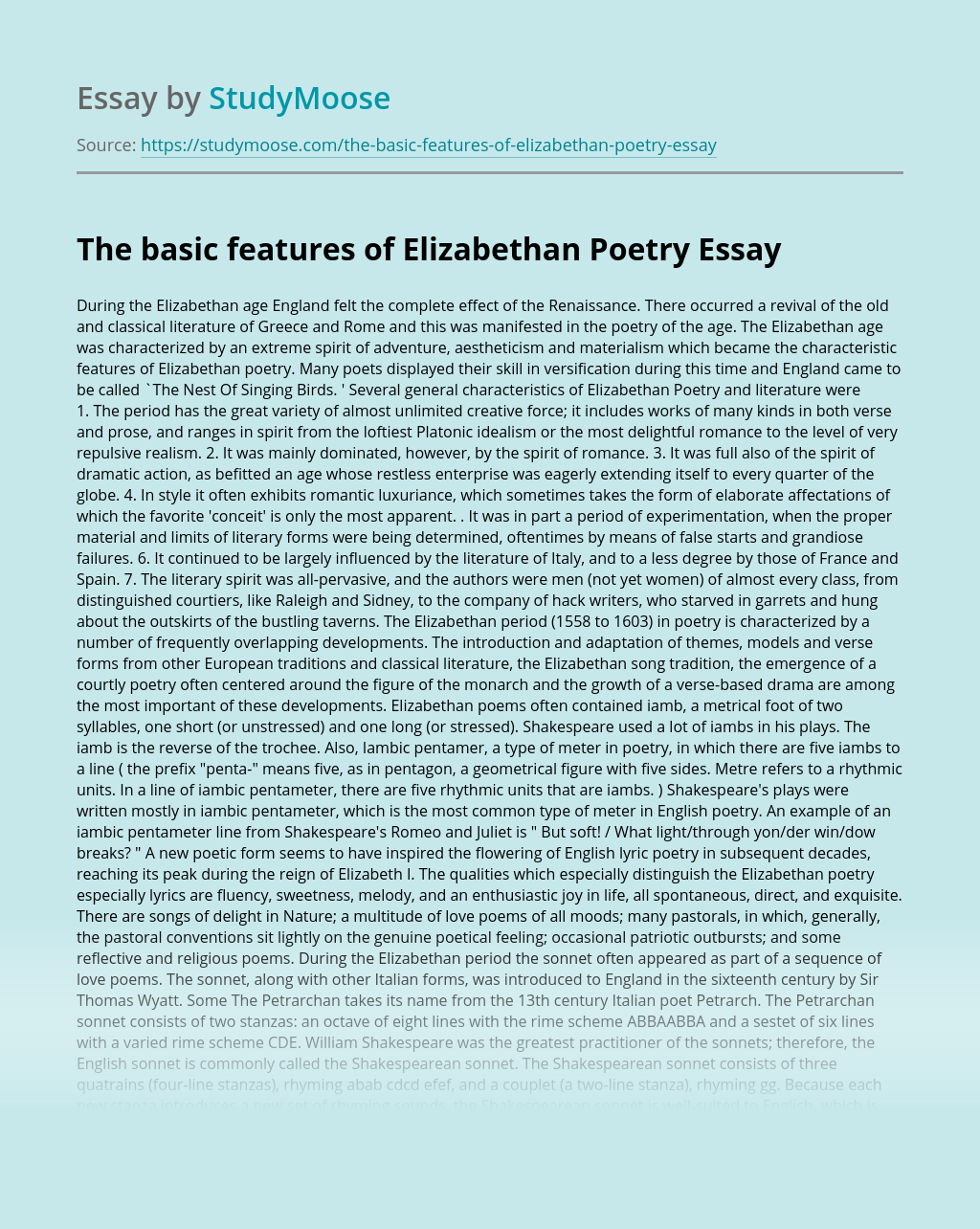 Don’t waste time
Get a verified writer to help you with The basic features of Elizabethan Poetry
Hire verified writer
$35.80 for a 2-page paper
Stay Safe, Stay Original