The Arguments Against Foreign Aid

This essay will discuss about foreign aid to the developing world countries. Nowadays, there are still many countries at different continent in this world still need some help from the other countries that already developed. For example, most of the countries in Africa really need assistance while they are still developing. But, is it really help? Or is it just makes the developing country be worst? These two questions are what we are going to discuss.

A lot of people arguing about foreign aid to the developing countries, and most of them are disagrees with the help that gotten by foreign country.

Don't use plagiarized sources. Get your custom essay on
“ The Arguments Against Foreign Aid ”
Get custom paper
NEW! smart matching with writer

Some resources saying that Foreign Aid is not give any positive effect; it is just give some of negative effects. For example, a country name Zambia at Africa has been a recipient of considerable foreign aid over the years. As aid to this country grown, this country is actually become poorer than before. From this example, there are many arguments come from different philosophical to against this foreign aid that give to developing world countries (Riddell 2007).

The political right agrees with statement that say foreign aid just give a number of negative effects. There are several points to discuss about the negative effects from the foreign aid. Firstly, most of the time, foreign aid is not successful because of corrupt that affect this project. Secondly, Aid money is often misspent, even there is no corrupt there.

By looking solutions from the outside, the money may be use for a bigger project that makes the government get an advantage.

For example, government use the money for generates large number of jobs that providing few long term benefits for the government. The third one is transfers of low interest concessionary finance will interfere in the market of interest rates and exchange rates. Not just the statement above, the political right also says that foreign aid will create problems. They say that flow of aid is sometimes not dependable, because the government is manipulates it with political reasons. The other problem is aid make the people at a less developed countries not discipline, this is one of the reason why people in Africa are disagree with aid because partly they feel like their silence or support just been bought with aid money.

Not all of people disagree with foreign aid for a developing country, because if we thinking positively, there are some benefits from aid and there are three reasons why they want accept the aid from the foreign country, the reasons are economic reason, political reason, and moral reason. Firstly, economic reason, simply it is the most important reason why a country want to be helped by another country. For example a country called Zambia accept the aid because a economic reason which have 3 purposes, improve the investment, enable payment on foreign doubt, and enable the infrastructure such as roads. Secondly is political reason, in some developing country politic is very important in order to maintain power. This type of aid is different with the most of aid, this aid is mean to be help a country that less power which mean the aid is helps for the military that provides more power to a developing country.

For example Israel, it was a recipient of the Official Development Assistance in 2003, they accept the ODA for a political reason, for build more power for their government. And know Israel is one of the most powerful army in the world. The last reason is moral reason, many people think that developed country have a moral responsibility to helping the poorer countries or the less developed countries. This reason may be because of humanitarian reasons to redistribute the poorer countries. For example, Zambia was occupied by UK several years ago, and now UK feel like they have a responsibility to rebuild Zambia. These are the three reasons are the main reason that why sometimes a developing country need a help from a more developed country (Bized 2001).

It is be useless because the almost all the government in the developing country do some corrupt or if it is not, usually the aid is fail to help because the people at the country itself do not want to be helped. They want to be discipline and make some money by themselves. There are a lot of developing countries that not accept the aid from foreign countries, because the reason above. They want to develop by themselves, and even the developing is not work so well, they say that they still get a pride because they are not helped by anyone (Carol 2007).

The Arguments Against Foreign Aid. (2016, Nov 21). Retrieved from https://studymoose.com/the-arguments-against-foreign-aid-essay 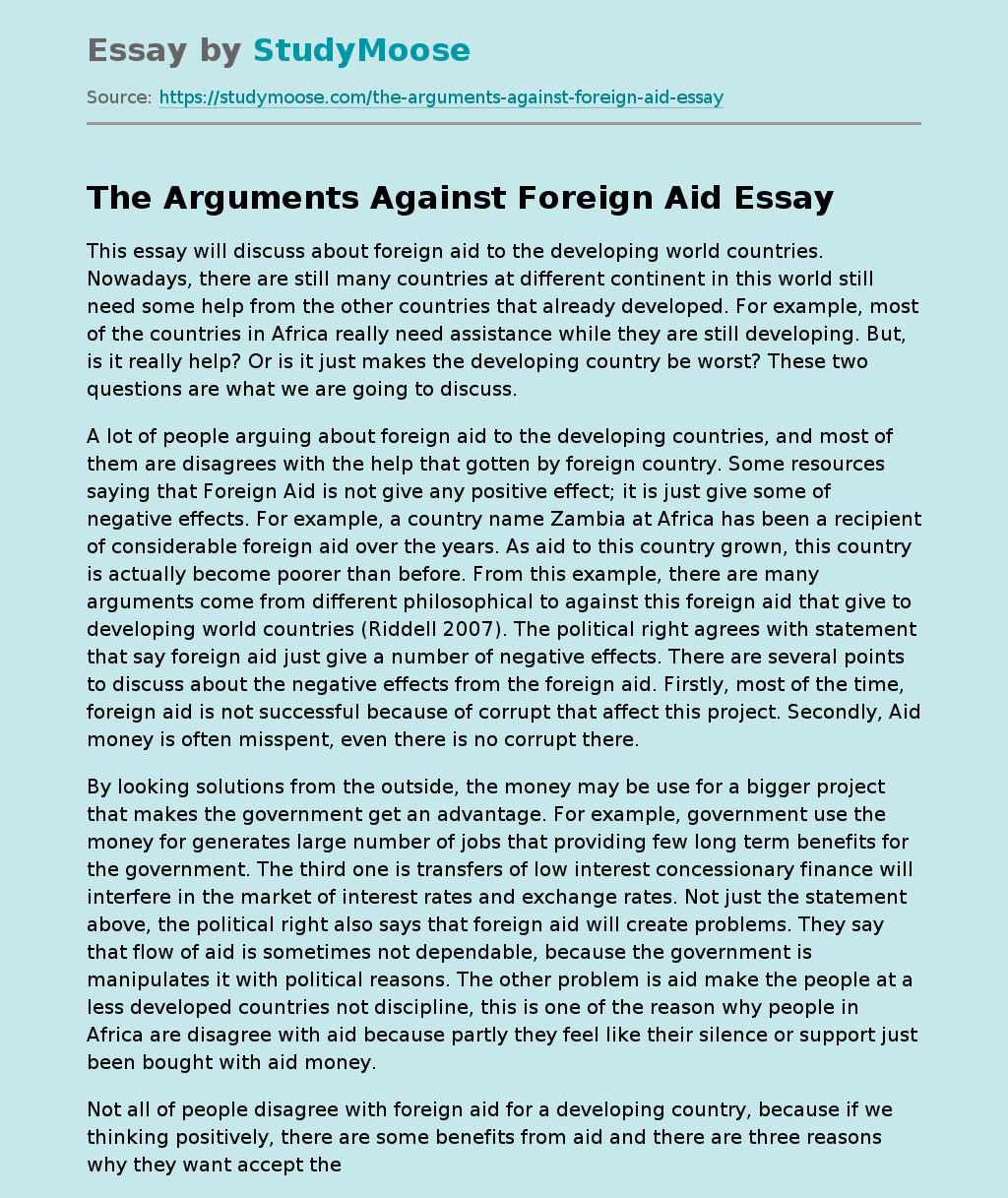