Don't use plagiarized sources.
Get Your Custom Essay on The Annexation Of The Philippenes Just from $13,9/Page

People will be able to have jobs as sailors to transport goods to other countries; this will help the economy of the U.S. The Philippine Islands have many natural resources and crops that will come to America such as rice, corn, sweet potatoes, cassava, taro, yams, peanuts, beans, string beans, greens, eggplants, tomatoes, onions and many other vegetables. Many fruits are grown there such as papayas, bananas, pineapples, mangoes, jackfruits, pomelos, avocados, oranges, durians, and best of all, coconuts. The availability of these goods will be a benefit to the U.S. economy.

Another reason why the United States should take the Philippines is to teach them religion. The United States wants to bring Christianity into their lives. They also want to civilize the Filipinos so they will be cultured and educated. The Philippines is strategically located, providing easy access for the U.S. military and navy if they are needed anywhere in Asia. If the U.S. doesn’t take the Philippine Islands, a country such as Germany will. This could bring about a situation where the U.S.’ security is jeopardized.

The United States should annex the Philippine Islands. It is in the best interest of the United States and its people, as well as the Filipinos and their neighbors. By adopting this position the U.S.’ security will be strengthened, because our being in the Philippines will keep the peace in the region. 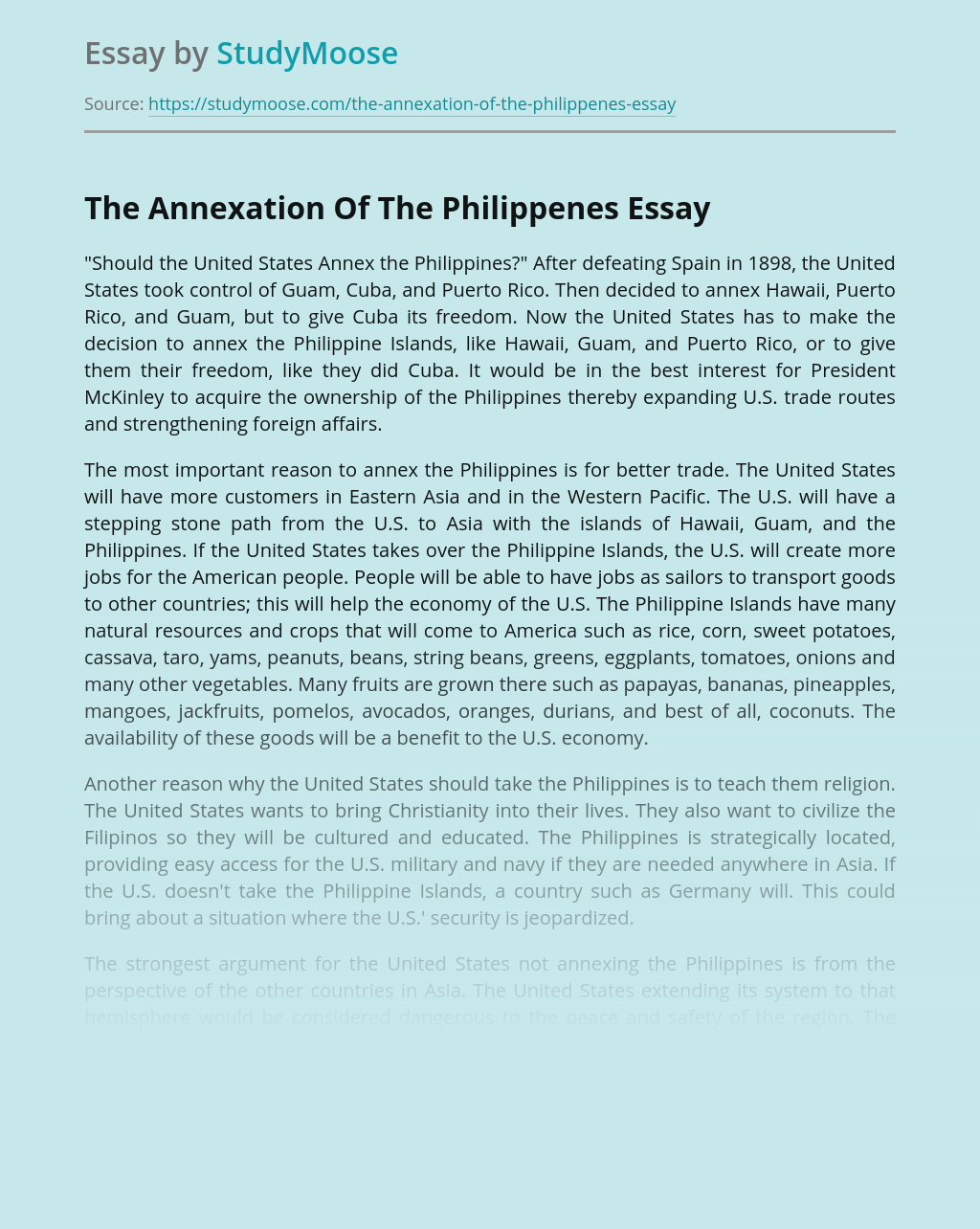 Introduction The Association of South East Asian nation (ASEAN) is an Organisation formed by the East Asian nations in 1967. These nations include Indonesia, Malaysia, Philippines, Singapore, and Thailand which were the first five members state that formed the Association and later were joined by other smaller and weaker states such as; Brunei Darussalam, Cambodia,...

Get Essay
The Impact of European Imperialism in Africa

There are several reasons why the European nations competed with each other to gain colonies in Africa. They all wanted to gain power and prestige. The more territory that they were able to control in Africa the more powerful and important they thought they could become. Africa was tremendously rich in natural resources, which could...

The Manila Zoological and Botanical Garden or Manila Zoo emerged from the ashes of World War II, a proud monument of man’s innate love of nature and its multitude of creatures. This showcase of then Mayor Arsenio H. Lacson’s vision was born on May 18, 1959 by virtue of City Ordinance No. 4135 and inaugurated...

Shokan Valikhanov – scientist, historian, ethnographer and folklorist, traveler, educator. Father: Chinghis Valikhanov. Mother: Zeynep Chormanova. Wife: Aysary Valikhanova. He was born in 1835 in the fortress Kusmurun (Kushmurun). At birth he was named Muhammad-Kanapiya and his mother called him Shokan. In private elementary school of aul Kushmurun, Shokan learned the basics of Arabic, Persian,...